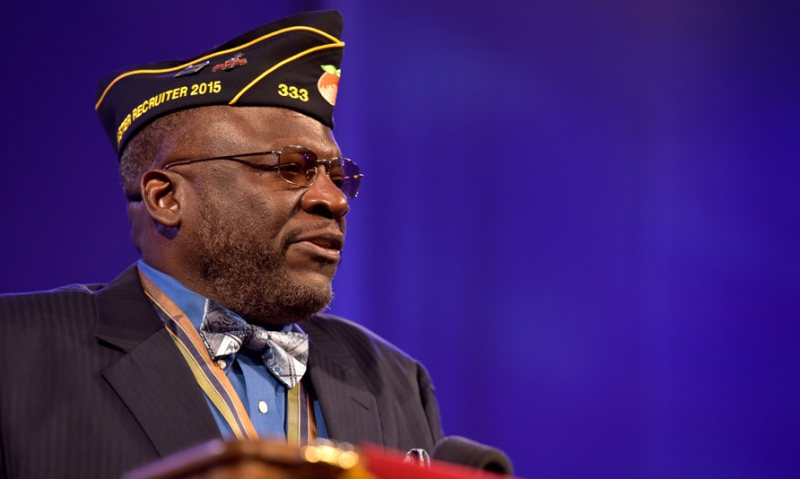 In 2012, Edgar Johnson – then a member of Post 267 in Columbus, Ga. – recruited more than 400 members into The American Legion. Johnson thought that total was enough to lock up the Legion’s National Recruiter of the Year Award.

But when he found out it wasn’t, Johnson turned his focus to 2013. “My (post) adjutant told me that she was sorry because she thought I had enough,” Johnson said. “So we said, 'Next year, we guarantee we’re going to have enough.'”

And he did. In 2013, Johnson recruited 724 members to win the award and earn a trip to the Legion’s national convention in Houston. In 2014, Johnson focused on mentoring others in the art of recruiting and still managed to sign up 51 new members of his own – earning what was then his seventh Gold Brigade award.

But Johnson came back in the 2015 membership year with a new focus: winning a second National Recruiter of the Year Award while bettering his winning year’s total. And when the award winner was announced in early September during the national convention in Baltimore, Johnson had hit both goals.

In winning the award, Johnson recruited 725 members into Post 333, also in Columbus. He was part of a group of area Legionnaires who chartered the post in spring of 2014 and has seen it grow to more than 1,000 members.

“Being a new post, that was a main thing,” Johnson said of his motivation. “We refused to fail, so what I wanted to do was make sure we set an example of what (Post) 333 was about.”

When approaching a prospective member, Johnson talks about the camaraderie the Legion provides. “If you were to get out of the Army right now and go back home, who would you be able to talk to when you’ve been away for three years,” he said. “It’s hard to talk to a civilian. When you’ve been in the military, you can talk to one another. I don’t care where you go, your nationality, your race, whatever. You’re able to talk (with fellow veterans) about anything you’ve done in the military.

“A lot of guys hear that, start to shake their head, and then they start to fill the (membership) application out.”

Johnson said that he played American Legion Baseball but didn’t know anything else about the organization. He’s made it a goal to recruit younger members into the organization – including many still on active duty in the military – to help continue the Legion’s legacy.

While winning another Recruiter of the Year Award would be nice for Johnson, it’s not a priority. “It’s not about me,” he said. “It’s about my Legionnaires in this post, my commander, my adjutant and my service officer."