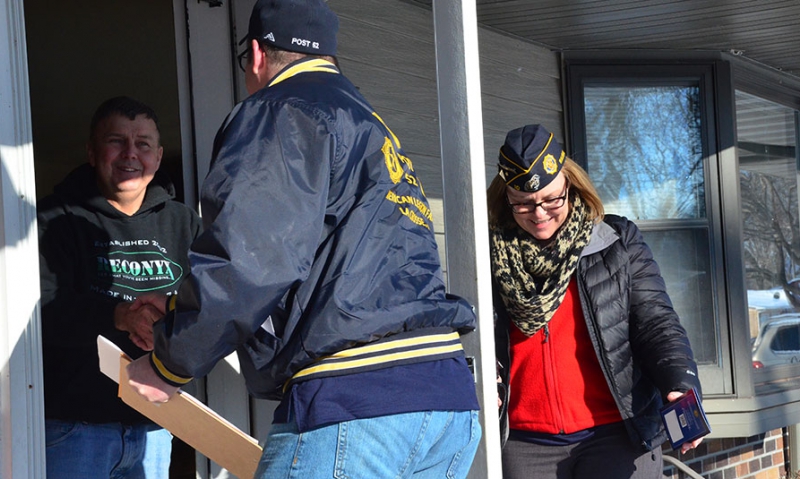 Temperatures that sometimes didn’t reach double digits failed to keep Department of Wisconsin Legionnaires heading out into the cold in an attempt to grow their posts’ membership rolls.

A revitalization of the department’s 7th District in mid-January brought national staff, department leadership and local Legionnaires together to reach out to prospective, former or headquarters post members. The effort brought in 52 veterans in one of those categories into local posts in the district.

Department Commander Dale Oatman, Department Adjutant Dave Kurtz and Department Membership Chairman Darla Porter assisted in the effort based out of Post 52 in La Crosse. Porter also made a stop at Post 100 in Sparta.

“You get complacent,” said Post 52 Adjutant David Johnson, who spent part of the revitalization going door to door. “(The revitalization) gives the post a little spark to say ‘We can do this.’ What I’ve done is made a list of all my non-paid members … and now every night maybe before or after a meeting (I’ll) get a couple three guys together, make a few phone calls and keep it going. It’s a good way to spark that.”

Johnson said that Post 52 – the department’s largest – has 50 members pass away each year. “I have to get – in order to not continue to shrink – I need to get 60 members a year. Anything we can get helps. To be able to get 10 in one week, that’s great.”

Bill Binnebase, first vice commander at Post 417 in nearby French Island, went door to door all three days and was personally responsible for renewing three members and signing up two new ones.

“It’s more personal,” Binnebase said of meeting up with former or prospective members face to face. “You can feel more personal with the people. (And I love) to listen to older veterans talk. It was really great to be able to listen to some of the stories they had. And, of course, you hear some of the problems they’re having … and you can maybe give some advice as to what direction they can take.”

In addition to going door to door, volunteers also made dozens of calls to assist the effort. A county veterans service officer also provided Department of Veterans Affairs assistance at two posts, while a representative from VA’s local Vet Center also came to La Crosse to assist with the effort.

Lesko had asked for the revitalization effort to take place. “When (Lesko) requested it, we were hurting,” said Krueger, a member of Post 100. “We were way behind.”

Thanks to pulling in more than 20 members during the revitalization effort – as well as members into three others 7th District posts – Post 100 hit 100-percent of its membership goal for the year. “We’re really happy with the effort,” Krueger said. “It really helped us get those numbers back to where they needed to be.”