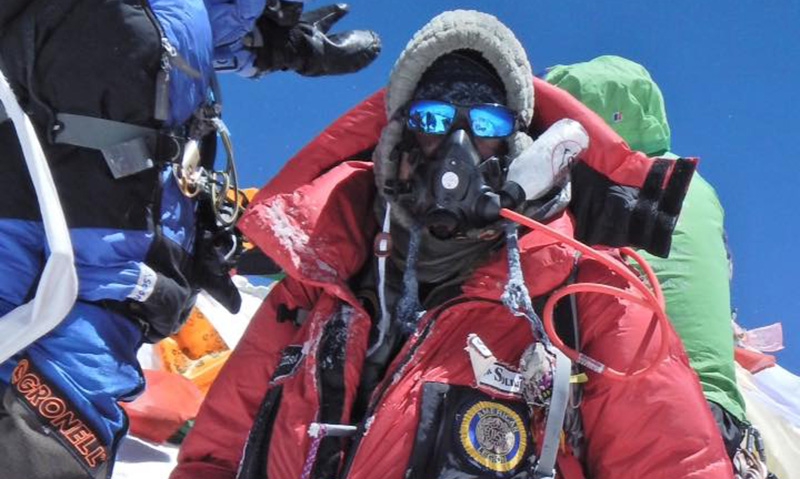 Mike Fairman at the top of Mount Everest on May 19, 2016. Photo credit Department of Ohio

Legionnaire and co-founder of Summit for Soldiers Mike Fairman accomplished what few Americans ever will – he reached the 29,029 summit of Mount Everest.

The former Navy corpsman and an Afghanistan war veteran from Columbus, Ohio, reached the highest point on the planet on May 19 at 11 a.m. Nepal time. Fairman, a member of Legion Post 276, made the ascent wearing The American Legion emblem on his parka. A Summit for Soldiers American Legion team comprised of six Ohio Legion members – Dietrich Stallsworth, Steven Downey, Andrew Oakes, Anna Pelino and Rick Amoros – will depart for Nepal on May 24 to trek to the 17,565-foot Everest Base Camp and deliver supplies to villagers who have endured a major earthquake and a deadly avalanche in the last two years.

Fairman and other post-9/11 era veterans built the growing network called Summit for Soldiers seven years ago, and The American Legion Department of Ohio became a strong supporter this year. The department was the title sponsor of a “R.O.C. for Veterans Music Festival” April 2 in downtown Columbus to promote the expedition and to attract more veterans to the cause. The group’s purpose is to encourage healthy outdoor activity and provide veteran-to-veteran support for those who suffer and may be at risk of post-traumatic stress disorder or suicide. Activities have included winter treks through national parks, bicycle rides, hikes, fishing trips and other experiences in central Ohio and across the country.

Fairman tried to take his own life three years ago. Today, Fairman wears a tattoo that expresses four figures: 22 for the number of veterans who commit suicide daily in America, 60-80 for the minutes that pass between each self-inflicted death, 8,000 for the annual tally of such tragedies, “and the minus-one is for me,” he said. "Summiting a mountain, there’s all these objective hazards that you have no control over, just like in dealing daily with mental health issues. You get to the summit, and what do you do? You go back down and start over again. It’s a daily struggle. That’s the analogy behind Summit for Soldiers. For me, it’s to show you can go and take on big challenges.”

Read the story about Fairman and the rest of the Summit for Soldiers American Legion team here.