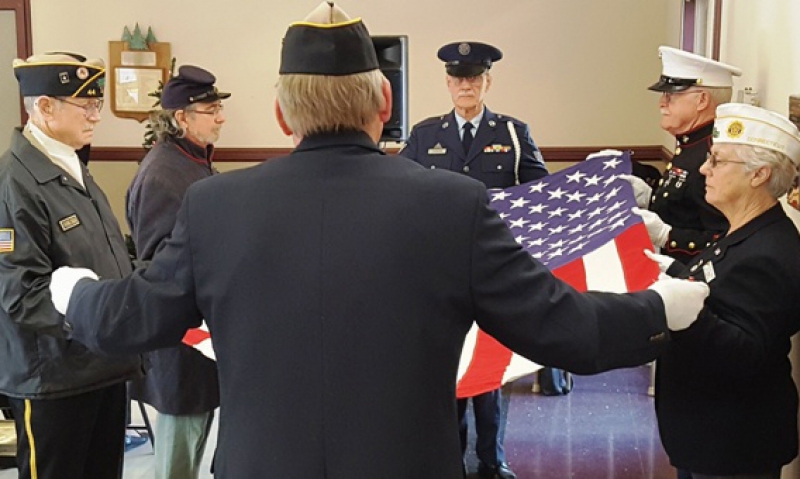 January 2017 will mark the 340th consecutive month that American Legion Tyler-Seward-Kubish Post 44 will have honored a deceased veteran for the Department of Connecticut’s Veteran of the Month program. The program, initiated by two members of the Bantam, Conn., post in 1989, was formally adopted by the Department of Connecticut and by the National Americanism Commission per Resolution 159 during the 1993 National Convention in Pittsburgh.

“We do not mourn their deaths, we honor their lives” is the slogan carved into the stone wall of the All Wars Memorial, which was created by Post 44 and Bantam community members as an expression to the reason a deceased veteran has been honored on the first Saturday of every month since October 1989.

The Veteran of the Month program is open to deceased veterans who were either honorably discharged, died while serving on active duty, or who are prisoners of war or remain missing in action. It is not mandatory for the honoree to have been a resident of Connecticut or a member of The American Legion.

A family member nominates the deceased veteran to be honored as Veteran of the Month, which entails a ceremony that is open to the public and held outside at the All Wars Memorial or indoors at the Bantam Borough Hall. The ceremony includes a reading of the veteran’s personal and military life, a three-volley salute and the raising of the deceased veteran’s burial flag, which flies until the following month’s honoring. Post 44 provides an American flag to be flown for POW/MIA veterans.

“The burial flag, an endeared remembrance of the veteran, is again a center of respect in a ceremony that when completed is returned (to the family) and gains renewed prestige within the family,” said Post 44 Commander John Lilley.

The flying of an American flag is what sparked the Veteran of the Month idea for the late Post 44 members Arthur Shaw and Francis Fabbri. A deceased veterans flag was flown at the entrance of the Bantam Cemetery when the current flag was unserviceable and shipping for the replacement flag was delayed. Shaw and Fabbri noted how veteran’s burial flags usually end up in a closet and forgotten.

“In either case, not the measure of respect for the flag or veteran that served under that flag. Thus, the Veteran of the Month was born,” Lilley said.

Jan. 7 will mark the 379th veteran to be honored, as sometimes the honoring includes more than one veteran if siblings all served. For example, Post 44 recently hosted a Veteran of the Month ceremony for three Connecticut brothers who fought in the Civil War and were all killed within two weeks of each other in the spring of 1864. To read more Veteran of the Month stories, click here.

As the program continues to grow, several Legion post and district leaders throughout the state help Post 44 members conduct the ceremonies for veterans. “It’s great because you have Legion post helping Legion post. There’s just a whole lot of good that is happening,” said Post 44 Adjutant John Harrison.

Every month in 2017 is reserved for an honoring of a deceased veteran for the Veteran of the Month program, and 2018 is beginning to fill up.

The growth is “a testimonial to the support (the program) has received from the public, the media and the support of Legion membership,” Lilley said.