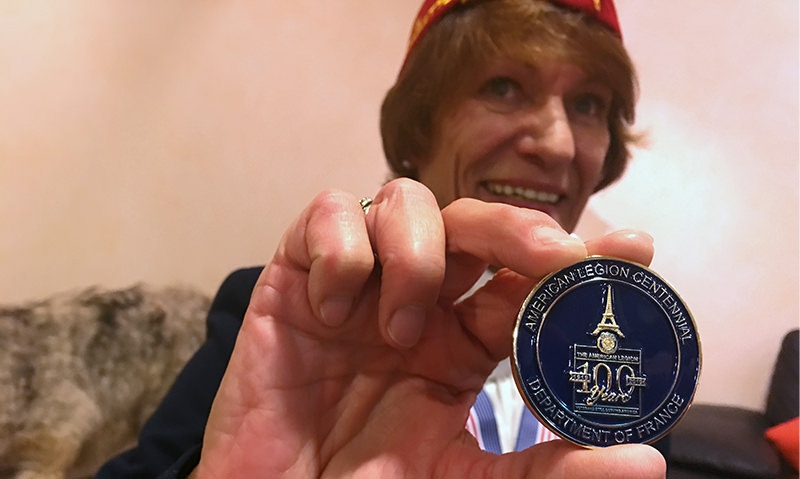 March 2019 is firmly circled on The American Legion Department of France calendar. That's when Legionnaires across Europe will celebrate the organization's 100th birthday in Paris, where a gathering of soldiers, sailors and Marines that month in 1919 gave birth to what would become the largest organization of U.S. veterans.

To honor the centennial, and to help cover anticipated costs of celebrating the anniversary, the Department of France has struck a commemorative challenge coin that has been a hot seller since it was introduced last summer.

American Legion National Executive Committee member Nola Maloney, an Air Force veteran, proposed the idea of a centennial challenge coin soon after she was elected to the NEC at the department convention in 2016. "I said I'd like for us to have a special coin because we are the birthplace of The American Legion," she explained. "This is where our veteran brothers first started our organization. I also knew that our department would need some kind of subsidy because of the centennial."

The coins have been purchased by members, collectors and post leaders to distribute among military personnel, supporters and others who help the department fulfill the Legion mission in communities overseas, including many U.S. military installations.

"It's a classic challenge coin, and a good one," said Maloney, who is delighted by sales so far. "We're not even through our first year, and we've already sold a third of our coins."

The challenge coins are $10 each, plus shipping, and may be ordered by emailing Maloney at NECMaloney@gmail.com or by sending a check payable to The American Legion Department of France to her U.S. address at: