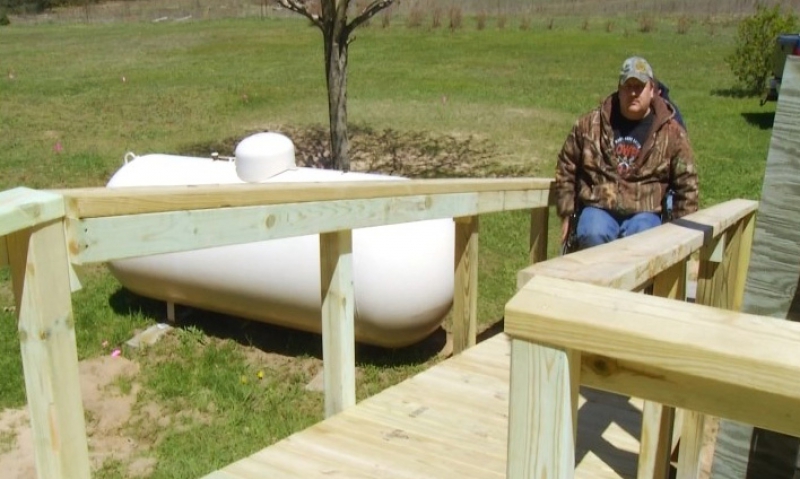 Justin Flowers and his caregivers were in a tough spot. Flowers, who served as a combat engineer in the U.S. Army from 1992-94 and now is paralyzed in his left leg, lives with caregivers Collin and Sharon Dockhan.

Flowers praises the care he receives from the couple – “they bend over backwards for me,” he said – but also said they’re the type of people who rarely ask others for help. So when the Dockhans were informed that they needed to move their driveway after nearby property was sold, it meant building a new ramp and deck so Flowers could get in and out of the house.

“(The Dockhans) are on Social Security, and he gets (VA benefits), so they don’t have a whole bunch of money,” Flowers said. “And this was a big project.”

Flowers said Sharon was passing around a flyer explaining their situation when she stopped at the Knox Helms American Legion Post 554 in Morley, Mich.

“A guy jumped up and said, ‘I think we can do this,’” Flowers said. “These guys at the Morley American Legion need the highest kudos possible for what they did. They drew up a plan, executed it … and in one day they put this deck and ramp together.

“I am just so floored by how they did this. One guy told the (local) news crew he was going to stay … until he got the deck done. For The American Legion to come out and help these people – they were doing this for me.”

Legion volunteers spent an afternoon building the ramp and deck, getting donations from Radle Construction and Big L Lumber. The post also donated $1,000 itself for lumber.

“How they came together like this … this is above and beyond,” Flowers said. “It really just amazes me that they did this.”