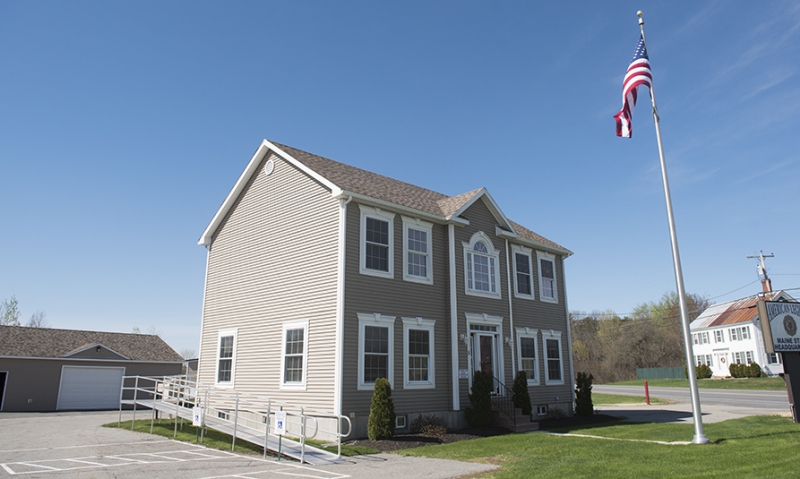 For years The American Legion Department of Maine’s headquarters resided in a rental space that was, in current Department Adjutant Paul L'Heureux’s words, “just not up to speed. If we were going to make a difference – the image, what we do and everything – it was just not there.”

When a severe ice storm damaged the building and created a water leak, L’Heureux and others in the department decided it was time for a change. And now, the department is housed in what is more of a compound, featuring a building for the Legion headquarters, another for the department’s American Legion Auxiliary and Sons of The American Legion state offices, and another that serves as both a meeting and teaching classroom.

“We had been renting a place for years,” L’Heureux said. "All we had to show (for it) was a (rent) receipt. We had money in the bank. Department Finance Officer Tommy Adkins, a smart man who had worked for a couple Fortune 500 companies, said ‘We can make it work.’”

With support from department leadership behind him, L’Heureux started the search for a new home and found one in a modular home display in Winslow. The department purchased it and turned the building into the state headquarters. The previous owner left the department approximately $12,000 in furniture that L’Heureux was able to utilize. A conference room with teleconference ability now allows the department to conduct some meetings without bringing in Legionnaires from all over the state.

And new office equipment was purchased, making a huge difference in day-to-day operations.

“There’s a lot more activity going and a lot more people that (visit headquarters),” says Office Manager Rachael Currie. “We actually have increased in what we do here. Our (department) newspaper has increased from 20 pages to 32. We scan our checks instead of going to the bank every day. It’s awesome.”

The former storage building-turned-classroom facility, named The Center for History and Professional Development, houses chairs and tables that Legion members have been able to make a donation in honor of someone, thus funding the cost of the furniture. There is an audio-visual equipment, both men’s and women’s restrooms – the women’s bathroom was built with a Home Depot grant – and a podium and head tables built and donated by Legionnaire J. Roland St. Pierre.

“That’s for that next generation of veterans,” L’Heureux said of the classroom building. “I think we’re ahead of the curve in some ways.”

L’Heureux saw the potential to bring the entire Legion family onto the property and wound up purchasing a modular classroom that could house both the Auxiliary and SAL.

Maine’s Department Auxiliary Secretary Michelle McRae said the difference between the department’s old offices and what they have now is night and day. “I don’t even know where to begin,” she said. “We were in a dark hole before. We never had a permanent home.

“But the biggest thing is the communication, particularly with the Legion and the Auxiliary, but even the Sons are in the mix now. The dividends it’s paying us are unbelievable. We talk almost every single day.”

L’Heureux said the department’s new home has made a difference in multiple ways, using a comment made by Sherry Carey – the administrative staffer with the longest tenure with the department – to explain.

“(She) said she has never seen so many people coming here (and) being proud of their headquarters,” L’Heureux said. “That speaks volumes.”