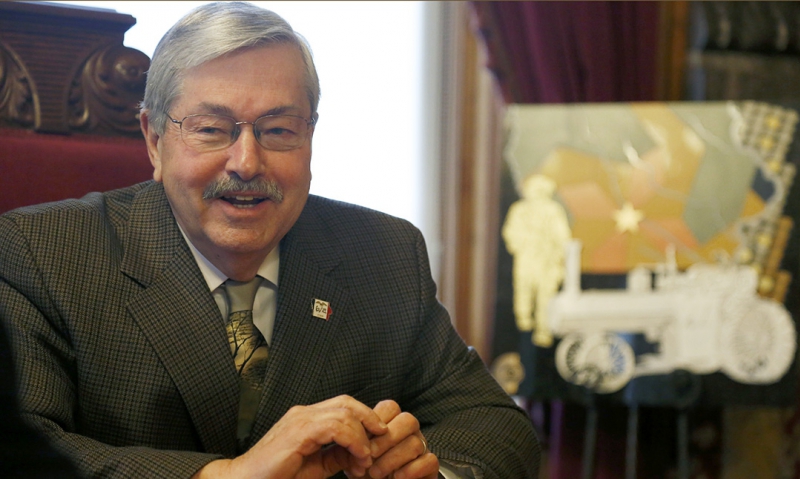 Iowa Gov. Terry Branstad, a 47-year member of The American Legion, is the new U.S. ambassador to China, following a 82-13 confirmation vote recently in the Senate.

Branstad, the longest-serving governor in United States history, was selected for the ambassador role because of his long-standing friendship with Chinese President Xi Jinping. Their friendship began soon after Branstad was elected governor in 1982.

In the 1980s, Branstad led Iowa delegations to visit China, and the Chinese made reciprocal visits to the Hawkeye State. On one of those trips, Xi visited Iowa and bonded with Branstad.

“We had no idea that he would be the leader of China in the future,” Branstad said. “He was then, basically, in charge of the Feed Association of Zhouzhuang.”

In 2011, when Branstad returned to China, he reunited with Xi. “He spends 45 minutes telling me how much he loves Iowa, and that was his first trip to America, how well we treated him. He calls us old friends.”

Branstad is optimistic that their 30-year relationship will be beneficial as he begins his role as ambassador.

“I think I can play a role in trying to explain some of the differences and hopefully work out some of the challenges that we have between our two countries,” he said. “We're the biggest economic and military power in the world, but they're the second biggest and they have the biggest population. Their economy has been growing faster than ours in recent years. It's critically important for the future of the world, really. We know there are some tough issues that we have to resolve and I hope I can play a constructive role in that.”

The opportunity is the latest in a long line of service for Brandstad, who served in the Army during the Vietnam War.

“There's a certain camaraderie among people who serve their country,” he said. “I served at a very difficult time. Vietnam was not a very popular time and it wasn't easy. I'm very proud that I accepted a call to serve my country. I love this country and I think The American Legion is a great patriotic organization. It's also a way to maintain those friendships and the camaraderie that was built up from the time in the service.”

Three of Branstad’s uncles served during World War II and they helped integrate him into the Legion.

“The American Legion was and is the largest veterans organization and it had a reputation of really serving veterans and helping veterans,” recalled Branstad, who also played American Legion Baseball. “(Joining) was just the right thing to do. It was the logical thing to do. I joined the post in Forest City and then when I completed law school and started practicing in Lake Mills, I transferred to Lake Mills and got to be the post commander at a pretty young age.”

Coming up: Look for a full interview with Terry Branstad in an upcoming issue of The American Legion Magazine.