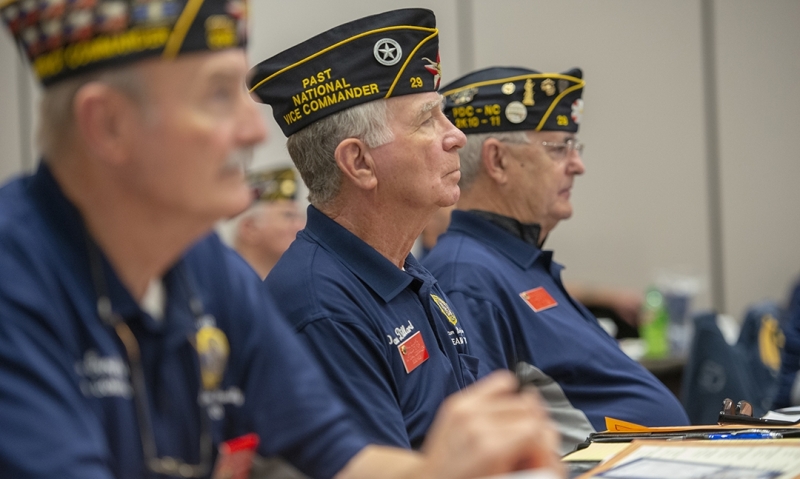 American Legion National Commander Brett Reistad has designated the week leading up to the organization’s 100th birthday, March 11-16, as “Buddy Check National Week of Calling.” He’s asking departments, districts and posts to put together teams to call expired members and those who have yet to renew, and to check in with current members and let them know that “we are a better American Legion with their involvement,” Reistad said during The American Legion’s National Membership and Post Activities Committee meeting in Indianapolis, Jan. 11-12.

American Legion posts also can choose another week around the Legion's centennial birthday to conduct the week of calling if March 11-16 doesn't work due to other arrangements.

A “Buddy Check National Week of Calling” toolkit was talked through during the meeting with committee members and members of the Legion’s 21st Century Ad Hoc Committee. The Buddy Check toolkit has been released that includes scripts for Legionnaires to use when making personal contact. View the Buddy Check toolkit at www.legion.org/membership/buddycheck.

“This is coming from our commander. When he says he wants a week of calling, we’re going to do that. This is very important,” said Membership & Post Activities Committee Chairman Rev. Daniel J. Seehafer of Wisconsin. “I really, truly believe that this will be the basis for our retention. It has to start somewhere.”

Past National Commander David Rehbein stressed that “this is important enough that we need to stop everything else (during March 11-16) and concentrate on contacting our members.”

When Paul Dillard of Texas, the national commander’s representative on the National Legislative Commission, called on former Legionnaires who had let their membership expire he had an 85 percent success rate. “Call on those expires, and they will rejoin,” he said.

A message Seehafer said that can be shared with expired members is, “Thank you for your service. Help us celebrate The American Legion’s 100th birthday and lead us into our second century strong by becoming a part of our family.”

In addition to the call for members to make personal contact in their communities, Reistad reiterated his new Team 100 recruitment and retention awards. A post that signs up a former Legionnaire whose membership expired in 2014, 2015 or 2016 can receive $5 each for every one of those members who rejoins in the 2019 membership year. American Legion departments worldwide can receive $2,500 in reward bonuses by hitting their 100 percent membership goals by May 8, 2019. Those departments who hit 105 percent by June 30, 2019, will receive an additional $5,000 each.

Seehafer shared that a department who has been reaching out by phone to expired members said a response they are hearing is, “'Now you call?’ It says something doesn’t it? The intention is for this to be an annual thing. And so when we talk about a national week of calling, it’s not just those who are expired. We want to call every single member of the American Legion Family. Every single member … ‘How’s it going? Just want to thank you for being a member.’

“We want to take this message … the why. Why we belong and take that to the next level.”