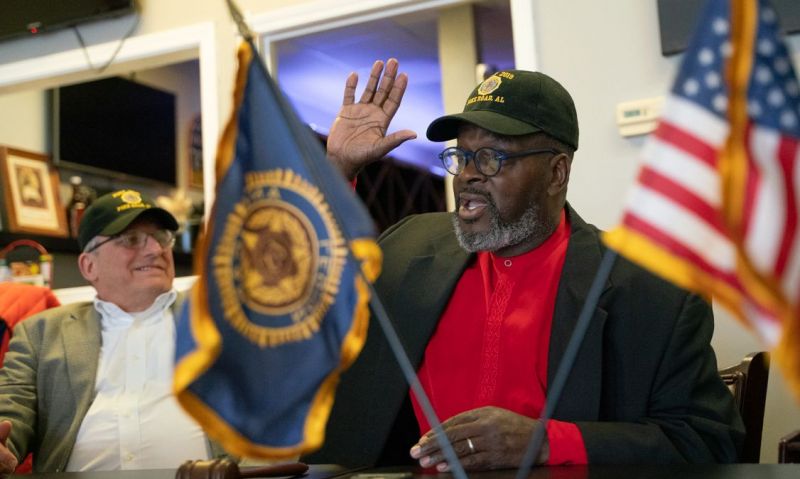 A meeting between Vietnam War Army veteran Roger Bryant and The American Legion Department of Alabama resulted in not only a new American Legion post, but amazing growth within that post in a short period of time.

That’s all Bryant needed to know. By Oct. 30, American Legion Centennial Post 2019 had almost triple the number of members needed to charter the post. The 37 members the post started with has grown to 112 in just over four months.

“We hit the ground running,” said Bryant, who joined The American Legion in order to start the new post. “And we’re still growing. We all put our hands in when we need to, and we get things done.”

The post meets once a month at Folcarelli’s Pizza in Montgomery while it looks for a building to use as a permanent home. But not having a facility hasn’t stopped Post 2019 from making a difference in its community. The post already has hosted a combined 400 people for Thanksgiving and Christmas dinners, reaching out to local churches to use as sites for the meals.

Post 2019 Service Officer Rich Harris, a Navy veteran, had just joined The American Legion by mail when he was contacted by Bryant about Post 2019. Harris said being a part of the Thanksgiving meal “was really one of the best experiences I’ve had in many years. These guys are so earnest and so plucky. It’s been a wonderful experience to be a part of this.”

Post 2019 members also distributed Christmas gift bags to veterans and elderly residents in the community, has an Auxiliary unit up and running and has a goal of starting a Sons of The American Legion squadron and conducting programs such as American Legion Baseball. There also is talk of doing less-traditional activities, such as putting together a monthly fishing trip for area veterans to relax and forget about any issues they may be facing.

Bryant has worked hard to build up the post’s membership rolls. “I was on the phone early mornings and late nights,” he said. “I walk into grocery stories, and I see you and find out you’re a veteran, you got one of my cards. ‘Call me.’ And if you didn’t call me, I called you.”

Post 2019’s members joined The American Legion for various reasons. Post 2019 Historian George Alexander, who did four tours in Vietnam while serving in the U.S. Air Force, grew up in Tuskegee, Ala., which he said had a strong American Legion presence. He views the post’s role as that of a mentor to younger veterans and as a source of comradeship for all veterans.

“To have a focused and structured approach to helping veterans, to me, is critical,” Alexander said. “And to be able to take what you have learned from your experience and give back to other veterans, that means a great deal to me. And when you get guys that have been there, done that, and you have a common ground, you can confidently move forward, knowing that somebody else appreciates and knows what you’ve been through. It’s very important to me.”

Alexander also sees the Legion as a key player in the attempt to reduce veteran suicides by helping with both the military-to-civilian transition and learning to navigate through veterans’ health care and benefits agencies. “I understand the frustration of trying to get help and having to deal with the bureaucracy. If you don’t understand how to meander through the waters, going to some of these agencies is only going to make your situation worse. To me, The American Legion is a crucial aspect of turning swords into plowshares and sheers into pruning hooks.”

Air Force veteran Corinne Russell had been a member of Alabama’s department headquarters post before transferring to Post 2019. “The main focus is to serve and help our fellow servicemembers,” she said.

That sentiment is shared by Post Chaplain George Austin, who served in the Army from 1997 to 2008. Austin said Bryant approached him about helping fellow veterans. “I was just excited about it,” he said. “That’s the largest thing for me.”

But Post 2019 also has been therapeutic. Vietnam Air Force veteran Jesse Menefee was a self-proclaimed introvert, in part because of jobs in isolated areas and in part because of a result of his military service. Being a member of Post 2019 has helped with the socialization process. “I came here, and we had a group that was, in a sense, looking for the same thing I was,” Menefee said. “The main thing we’re looking at here is assisting those who lack the ability to go forward and helping those who get to a stagnant point. You have a group here that does that.”

And for 35-year-old post-9/11 veteran Adrias Scott, who was in the Army from 2000 to 2006 and now serves as the post’s second vice commander, being a part of Post 2019 has helped “deal with a lot of the anxieties that come with being a part of the military,” he said. “I wanted an organization that brought together people such as myself … for the better of the community. That’s one thing that (Bryant) pointed out to me, and I saw it as a good idea and something that will definitely help me grow as an individual.”

Air Force veteran Sam Whalum, who serves as Post 2019’s sergeant-at-arms, said the timing of the birth of Post 2019 is a chance to share The American Legion vision with a large audience. “So here we are today in our centennial year, where we have an opportunity to capture and take advantage of the media that has been made available to us,” he said. “The key part … is that all of us are focused on the objective and mission of reaching out and helping our comrades. We have an enormous opportunity here … to bring others into the fold and strengthen our network. But most importantly, to give us an opportunity to pay back and give back to others.”