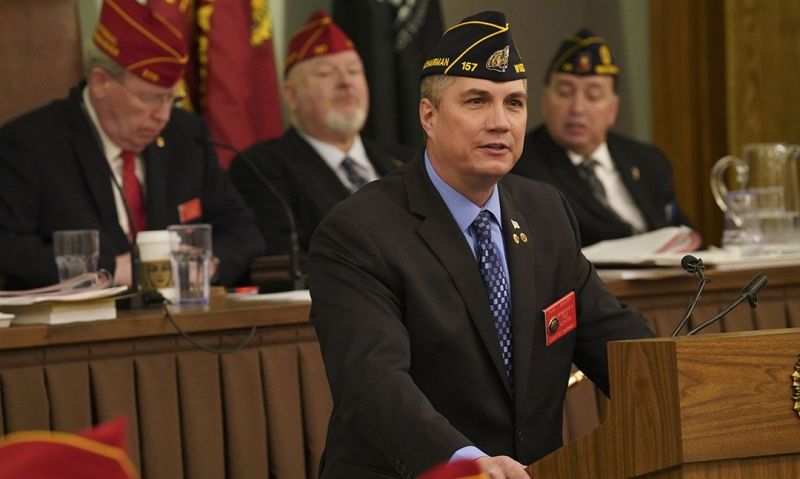 Eight American Legion departments achieved 100 percent membership by the May 8 target date – Alabama, France, Hawaii, Idaho, Mexico, Philippines, Utah and Wyoming. As a result, the departments each earned American Legion National Commander Brett Reistad’s Team 100 incentive award of $2,500. All departments still have a chance to earn an additional $5,000 for achieving 105 percent membership by the delegate strength date of July 26.

“Membership is the foundation the American Legion’s four pillars rest upon. We must engage our current members as well as all veterans, along with their families and our local community,” said Membership and Post Activities Committee Chairman Rev. Daniel Seehafer of Wisconsin to members of the National Executive Committee during his remarks May 8. “This starts with the Buddy Check … a network of Legionnaires, a family, a close-knit team checking on each other to ensure their basic needs are always being met.”

Reistad called upon posts, districts, counties and departments to make “Buddy Checks” by calling Legionnaires and former members during the week leading up to the Legion’s 100th birthday in March as a way to check in and see how they are doing. Seehafer emphasized to the committee that this isn’t a one-time occurrence – it’s ongoing. And the NEC affirmed this by adopting Resolution 18 during the meeting, which calls upon Buddy Checks to be conducted Legion-wide on the weeks of The American Legion’s birthday and Veterans Day. Results from “Buddy Check” week will be a new reportable item on the Consolidated Post Report.

“Our most sacred responsibility is to look out for each other, our fellow veterans,” Seehafer said.

“That might not sound like a lot, but one of those members could change a post, county, district or department. They could even save a life,” Seehafer said. “So igniting the fire in the belly once again, knocking on doors, picking up those phones of ours and making those personal contacts to members who have not yet renewed. Working membership is not easy; it requires us to be proactive.”

Membership isn’t just about the numbers, Seehafer added. “It’s about what we do. (American Legion) programs do drive membership. The more active we are in our communities, working these worthwhile Legion programs, the more visible we are to potential members. Thus answering that familiar question, ‘What is The American Legion?’ It’s about what we do. What we do for veterans and their families as well as for this culture.”

To answer the familiar questions, Seehafer pointed back to the new membership impact reports that are uploaded monthly on www.legion.org/membership/impact. These reports answer the "what we do" for veterans, their families and communities nationwide.

“This is what we do on a daily basis. This is our American Legion at work. Who in the world wouldn’t want to join?” Seehafer said in his ending remarks to the NEC. “Therefore an engaged and empowered Legionnaire is the biggest asset to our organization. And after all, as leaders assembled here, this is our most sacred responsibility.”