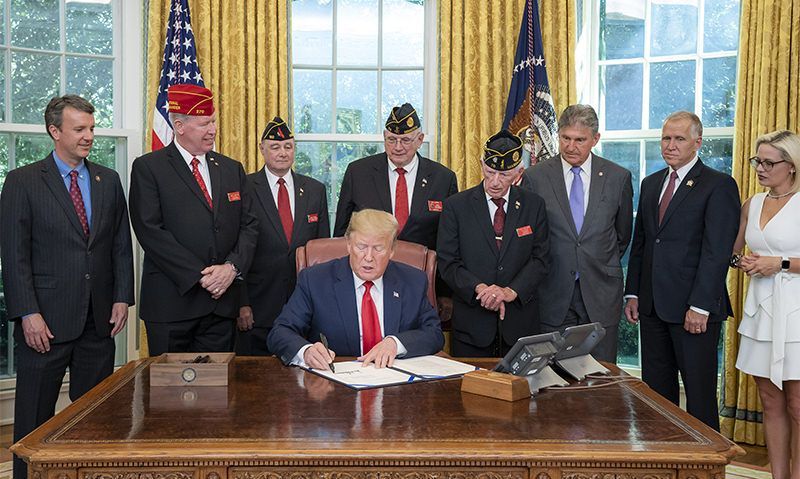 In a significant legislative victory for The American Legion, President Trump signed a bill July 30 that declares the United States has been in a state of war since Dec. 7, 1941.

The American Legion sought the declaration as a way to honor approximately 1,600 U.S. servicemembers who were killed or wounded during previously undeclared periods of war.

The LEGION Act (Let Everyone Get Involved In Opportunities for National Service Act) also opens the door for approximately 6 million veterans to access American Legion programs and benefits for which they previously had not been eligible.

“Recognizing the service of these wartime veterans is the right thing do and it is long overdue,” National Commander Brett Reistad said. “The families of those who were killed or wounded during these wartime acts should take pride in knowing that we recognize their sacrifice and service. Moreover, we are proud to welcome any of the six million living veterans from the previously unrecognized periods into our organization and call them ‘Legionnaires.’”

Now that the legislation has been signed, The American Legion’s eligibility criteria immediately changes from seven war eras to two: April 6, 1917, to Nov. 11, 1918, and Dec. 7, 1941 to a time later determined by the federal government. No other restrictions to American Legion membership are changed.

Reistad expressed gratitude to the bipartisan members of Congress for passing the legislation.

“We are grateful that President Trump fully acknowledges the importance of The American Legion by signing the LEGION Act in the White House today – just one week after it passed the House of Representatives,” Reistad said. “In an era of partisan gridlock, Republicans and Democrats in Congress overwhelmingly recognized the importance of allowing thousands of honorable but previously ineligible veterans the right to join the largest and most influential veterans organization in the country.”