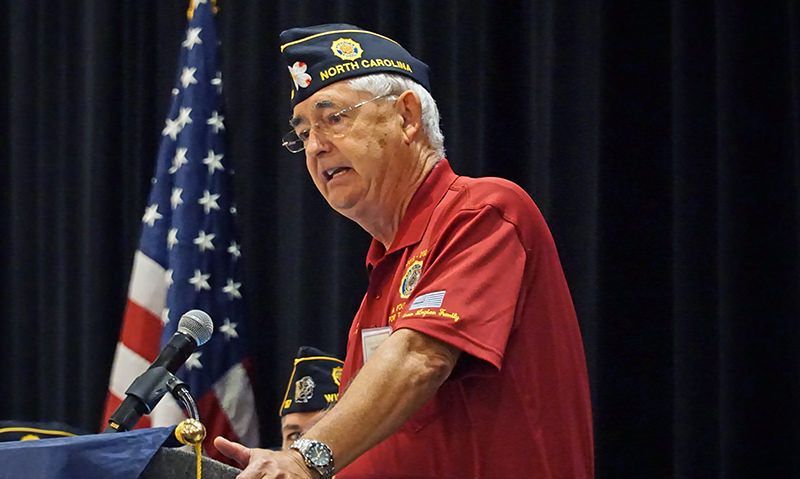 “A Foundation for the Future” will be the theme of North Carolina's Bill Oxford if elected American Legion national commander for 2019-2020. Along with his theme, he has two goals for membership – to increase retention rates and new members. Last year the Legion’s renewal rate was 86 percent and new members was 63,000. Oxford told attendees at the Legion’s National Membership Workshop last Saturday that his goal is 90 percent retention rate and 100,000 new members.

“We can do it,” he said. To achieve these goals, Oxford said community engagement has to be a part of every post’s membership program. “Every post has a story to tell. We can all help tell the story by branding and bragging. Tell the story, increase our visibility. We have to show people who we are and what we do.”

Oxford encouraged attendees to send press releases to local media about how they support youth with Boys State, Legion Baseball, Boy Scouts, Oratorical Contest, JROTC medals and other Legion youth programs; as well as when they provide a donation to a local charity and honor a local teacher, firefighter or police officer. And every post should be the go-to when local media wants to discuss veterans issues.

“Tell the story. Take advantage of getting to show people who we are and what we do and the contributions the Legion makes to America,” Oxford said.

National Membership & Post Activities Chairman Rev. Daniel Seehafer of Wisconsin encouraged workshop attendees to ask, “What American Legion post do you belong to?” when they see a veteran.

“The Foundation for the Future, that’s us,” Seehafer said. “We should have that fire; we need to have that fire. Let’s take the ‘need’ and put let’s ‘get.’”

Seehafer shared a story about a time when he was wearing a POW/MIA shirt and someone asked him what it meant as they mispronounced the words by stringing them into one. It was another reminder to him why it’s important for The American Legion to continue its foundation of service nationwide to veterans, servicemembers, and their families, and youth.

During a silent march in Wisconsin to remember all POW/MIAs, Seehafer said a family in attendance thanked The American Legion for continuing to remember prisoners of war and those who have yet to come home because their son was MIA.

“So when we go back home, and I know we get tired or maybe the membership numbers don’t jump like they should, we are the foundation for the future," he said. "Not I need to do this but I get to do this. I want to do this.”