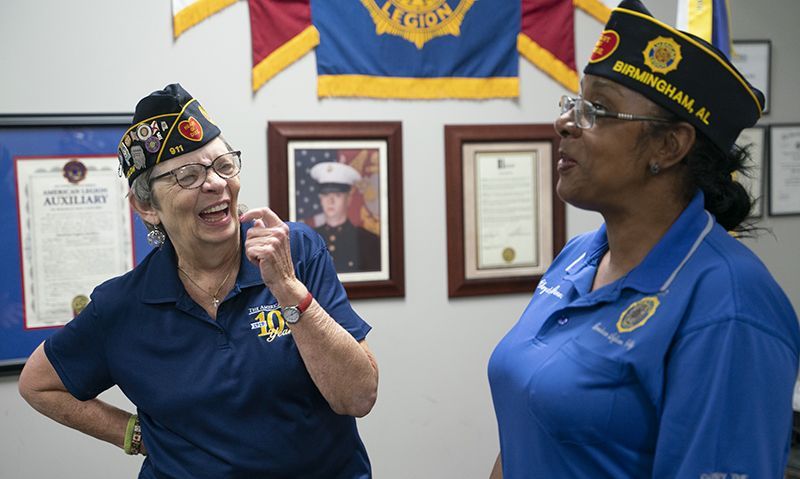 American Legion Post 911 in Hoover, Ala., has experienced a tenfold membership increase since it renamed itself after Ryan Winslow, who was killed in Iraq.

“We were 911 before 9/11 when the Twin Towers were hit,” said Ginger Branson, commander of both Post 911 and Jefferson County for District 21. “Ryan Winslow was a Hoover boy. He is also memorialized at Hoover High School, where he was a student.”

Winslow enlisted in the Marine Corps in January 2005 and completed boot camp that May. On March 25, 2006, Winslow was deployed to Iraq with the 2nd Marine Division. He was killed on April 15 when his vehicle hit an IED.

Past commander Ron Bradstreet came up with the idea to rename the post after Winslow and relocate it to Hoover. That turned out to be a jump-start for the post, which used to meet in a trailer. At that time, the post struggled with membership.

“I figured that’s what we needed to do, honor a hometown hero,” said Bradstreet, who is now Department of Alabama commander. “So we re-flagged here. Then we went to work on membership. We attend all the events in the city and try to be part of the community.”

“When you are in a post meeting and his mom and dad are sitting there, you don’t have to ask yourself why you are doing this,” Bradstreet said. “You see them right there. Those Gold Star families don’t want their loved one to be forgotten. And Ryan will never be forgotten here.”

As the post grew in size it eventually received permission to use a room at Hoover Tactical Firearms to hold meetings and other small-scale events.

“The change re-ignited passions among membership,” Branson explained. “What happened since then is that we went from 40 members to over 400 members.”

And with that renewed passion, Post 911 members participate in various Hoover community events throughout the year, including a breast cancer awareness program at the local VA clinic and an upcoming 5K run with Team Red White and Blue.

Chase Hersey, a post-9/11 veteran who served as a Navy corpsman, helps promote that message. He was commander at Post 107 but transferred earlier this year to Post 911 to help rev up the Riders program and their efforts to engage younger veterans.

Hersey credits Branson and Bradstreet with mentoring him. Now, he says, it’s his time to give back and provide leadership at their post. “Come see what we’re all about,” he describes his pitch to a younger veteran. “Come to a meeting. It’s not like the old days. Just come out, give it a shot and try.”

Post 911 not only embraces younger veterans, he says, it encourages the implementation of new ideas.

Chrystal Jones knows full well about the support that members of Post 911 can provide to younger veterans.

Jones is now a member of Post 338 in Brighton, about 20 miles away. One year when she was adjutant at Post 911, she was even further away from Hoover.

“Post members here are really dear; they really kept me grounded when I was over in Afghanistan,” said Jones, who served as post adjutant during her 2009-2010 deployment with the Army reserves. “I went through quite a lot. When events would happen, Ron Bradstreet would give me that reassurance I needed. We went through a lot of tragedies, losing one or two soldiers a day. It was some rocky times.”

Jones was stationed at Bagram but traveled throughout the country. “I would check on the soldiers to make sure they had everything they needed and get them things they did need. It was a good experience.”

Now she continues her service with the Legion on U.S. soil.

“The American Legion cares about veterans,” Jones says. “There are a lot of organizations that say they do. But in my time in The American Legion, I have literally seen them come to aid in times of disasters, come to the aid to someone who lost everything in a fire or lost stuff in a tornado. Or set up facilities for those who are going through post-traumatic stress disorder. They just do so much more than most people are aware of like scholarships. I love the way that they are a family organization.”