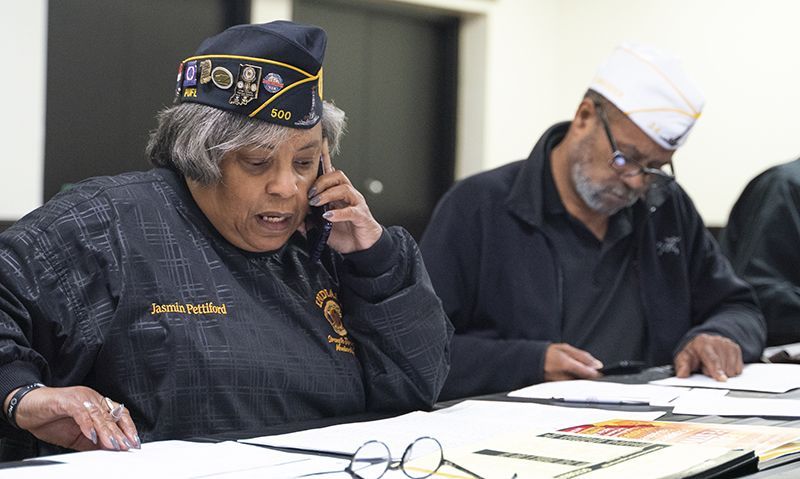 Bob Cooper received a post card in the mail inviting him to visit American Legion Speedway Post 500 in Indianapolis for an opportunity to transfer his membership and speak with a veterans service officer. So he walked through the post doors the morning of Oct. 8 during District 11’s two-day revitalization effort.

After two years in the Department Headquarters Post 777, the Vietnam War 173rd Airborne Infantry veteran transferred his membership to Post 500 and spoke with Department of Indiana Service Officer John Hickey about getting his VA benefits increased.

“I think we will be able to help (Cooper) quite a bit, so it was good for him to come out to the post,” said Hickey, a service officer for the past 27 years. “It’s nice to get up in the morning knowing you’re going to do something beneficial for our veterans.”

The post card Cooper received was one of 500 sent to former, expired or headquarters post members as part of the first of several revitalization efforts that the Department of Indiana has planned for this membership year. More than 10 Legionnaires from District 11 were stationed at Post 500 making phone calls and going door-to-door to bring back expired members.

“The biggest benefit of this revitalization is actually reaching out and contacting the members. Most who we are contacting today joined through DMS so they haven’t had that personal contact with their fellow members and haven’t been invited to join a post,” said Richard Brown, Department of Indiana membership chairman. “I preface the call by thanking them for joining the organization and then transition into an invitation to join our post.”

Brown’s theme as membership chairman is Recruiting and Retention Through Engagement, Action and Revitalization. “So this effort hits two of our key tenets of taking action and revitalizing our posts.”

Jasmin Pettiford of Post 500 made phone calls from her cell phone but said a piece of advice when making calls to expired or DMS members is to leave the post phone number as a call back if the veteran doesn’t answer. When she’s leaving the post number, she tells the veteran to call back and ask for herself or the post commander.

“I feel this revitalization effort is very important for our community and the Legion itself to let people know about our mission and purpose and to get them involved,” said Post 500 Commander Johnette Lawson. “We know that there are 600 (Indiana National Guard) soldiers who left for deployment so I’m trying to reach out to those families left behind so they know we are here if they need help with anything like mowing the yard or babysitting. We have a big Legion Family that can help them out so they’re not out there by themselves. We are here to help the community, not just the military but the community.”

While phone calls were being made at Post 500, a few Legionnaires, including Department of Indiana Assistant Adjutant Billy Johnson, drove around Indianapolis to visit former members at their home. For those who didn’t answer their door, a “Why You Should Belong” brochure was left behind as well as the October calendar of events for Post 500 and a letter about the department’s programs and scholarships.