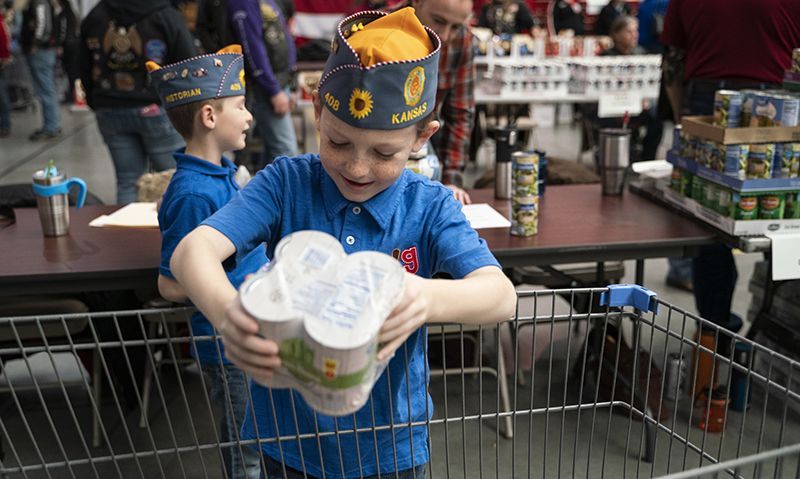 Thanks to the American Legion Family in Kansas, hundreds of Fort Riley families will have a full holiday meal, blessings and gratitude this Thanksgiving.

“This event is kind of emotional,” said Roger Beckley, a member of American Legion Post 39 in Abilene and the chairman of the five-person committee that coordinates the annual Big Red One Turkey Run. “You see the kids come through and it can be hard. I’ve had tears in my eyes the way some of these children cling on to you because Daddy or Mommy is missing. They think of me as a grandpa figure.”

Now in its 12th year, the Turkey Run provided full Thanksgiving meals to approximately 350 families, most of whom are at the warrior transition battalion at Fort Riley.

“We really enjoy the interaction of these folks. We want them to know that there are people out there who care,” said Beckley, who also is the department Riders chairman and adjutant of Post 39. “It’s just a great event for the American Legion Family and it builds camaraderie within our own organization. ”

Posts collect their assigned dish — potato mixes, stuffing, corn, green beans, cranberries and other traditional sides and desserts — and then bring the items to Fort Riley for distribution the Saturday before Thanksgiving. The Sons of The American Legion are responsible for the 350 turkeys.

Beckley thanked the more than 100 Legion Family volunteers assembled to pass out the food. “Without you, we don’t have this,” he said. “And if we don’t have this, then there are some good American soldiers and heroes that don’t benefit from what we are doing.”

When families arrive, Legion Family members escort them down the assembly line of Thanksgiving goodies, assisting them in assembling a boxed-up package of ready-to-prepare holiday food.

James Re, an active-duty soldier stationed at Fort Riley, expressed his gratitude to the American Legion Family.

“People that went before us are taking care of us,” said Re, who will share the Thanksgiving blessings with his wife and two children. “Everybody is saying ‘thank you’ to me. But if it wasn’t for them, I wouldn’t be able to do this. So thanks to them for all that they do.”

Re works as a cook on base.

“This makes a huge difference because after working at the chow hall, I’ll be able to come home and cook this food that we’ve been blessed with.”

It’s an annual tradition that began with Posts 401, 406 and 408. Michael Saindon and his wife, Kathy, are the only volunteers to have participated each year. “We saw the need and the Legion Family came together to make sure that no veteran went hungry.”

In the first year, 16 turkeys were donated to families at the Fort Riley WTB. That total increased to 35 turkeys the second year and more than 40 in the third year.

“That was a lot for us to do,” Saindon said, noting that the department wanted to expand the initiative to include vegetables and other side dishes. “So it became a state function. It’s grown to where we hit 750 families a few years ago. Now we are down to 350, which sounds bad. But it is actually good because that means we have fewer veterans who are in need. ”

Saindon, a member of the Sons squadron at Post 408 in Derby-Haysville, has a daughter and son-in-law who are stationed at Fort Riley. “It’s really personal for me,” he said. “It’s unbelievable. To see the families come through, it really pulls on your heart.”

Mindy King, a member of Post 408 who lives on the base with her husband and children, is among the five lead coordinators of the Turkey Run and the annual Operation North Pole. In December, Legion Family members reconvene at Fort Riley for a special Christmas celebration for the families featuring gifts from Santa Claus, holiday treats, and fun games for the children.

“I just really enjoy being involved,” King says. “It’s a lot of fun and a way to give back to the community. A lot of the soldiers and their families come out and it’s nice. I know we are helping a lot of our families today.”

Her children, 8-year-old Michael and 6-year-old William, are both Sons of The American Legion members and volunteered by passing out canned green beans at the event.

“They love coming here,” she says. “When they know it’s getting close to Thanksgiving time, they start asking, ‘Is it time to do the Turkey Run?’ They think it’s just part of the Thanksgiving tradition.”

Beckley knows it takes the selfless efforts of the Kings and scores of other volunteers to pull off the event each year. For him, it’s a way that he gives back to the current generation of servicemembers and their families.

“Since I don’t wear the uniform any more, this is my opportunity to serve our nation and serve our veterans — that’s why I do it.”