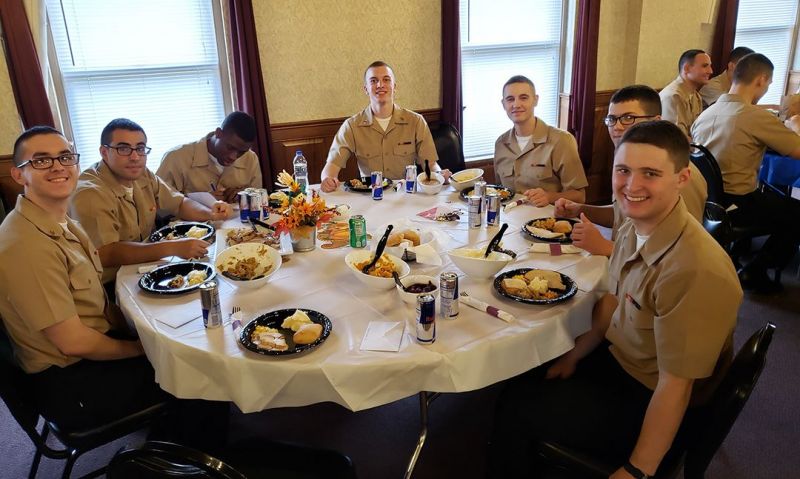 The U.S. Military Academy’s hockey team was on the road for a game against Canisius during Thanksgiving, meaning some of the players wouldn’t get to spend Thanksgiving with their families. But members of American Legion Post 928 in Derby, N.Y., made sure the 120 Army cadets got a Thanksgiving meal.

The post opened its doors to the team, providing a full Thanksgiving dinner. Family members of the players who live in the area were able to attend the meal as well.

"This is one of the few times the family can get together with them. They travel all over the country ... they don't get to see them that much," Post 928 Commander Larry Masters told WKBW. "As far as I'm concerned, they're veterans already and they're our future. They're going to be leaders in our country. We love doing stuff like this. Gives you a good feeling, a really good feeling."

For Army Team Captain Zach Evancho, who hails from nearby Buffalo, it was a chance to see family. “I've been on the road for the past five to six years for Thanksgiving,” he told WKBW. “To be able to come back to my hometown for Thanksgiving in my last year of hockey, it's incredible. I'm really thankful for all the people that put this together. It's amazing.”

Post 928’s Thanksgiving effort was one of several provided by American Legion posts for future servicemembers. In Somers Point, N.J., American Legion Post 352 provided a full meal and a day away from training for more than two dozen U.S. Coast Guard recruits from Training Center Cape May. In addition to the full meal, members of the post’s Legion Family offered up their cellphones so the recruits could call home.

The meal has been provided by Post 352 for more than a decade in tandem with AMVETS Post 911 and the Egg Harbor Township Submariners. Getting away from the training facility meant a lot to seaman recruit Evan Eschenburg, who was spending his first Thanksgiving away from family.

“I thought maybe we’d get a little more to eat or something,” Eschenburg told the Press of Atlantic City of his expectations for spending the day at Training Center Cape May. “But not like this; this is just amazing.”

In Illinois, a group of Chicago-area American Legion posts continued a tradition of providing Thanksgiving festivities to Navy recruits at Naval Station Great Lakes. At American Legion Post 208 in Arlington Heights, 35 recruits were delivered by bus for a day that included a full meal, free phone service and phone cards, and turkey sandwiches and other refreshments for the ride back to Great Lakes.

"It means a lot for me to go to The American Legion because being in boot camp is kind of stressful," Navy recruit Marshare Roserhule told the Daily Herald. “You don't get the freedom (while training), and this is freedom for one day. I thank God we are doing this today. I appreciate it."

Morton Grove Post 134 brought 39 Great Lakes recruits to the Morton Grove Civic Center for a meal, entertainment, and the chance to call friends and family through six phone lines donated by AT&T.

“We know how difficult and strenuous or just lonesome that it can be, being away from home,” Post 134 Commander Nora Gunning told the Chicago Tribune. “For some of them, it’s the first time they’ve left their town, city or even their area that they used to live … To see them smiling and talking to each other, it makes us happy.”

Recruit Cameron Saul was thankful, telling the Tribune, “It’s a crazy feeling to be far away from everything, your home, the people you know. But it’s definitely amazing to be welcomed into another culture, another group of people. It feels like I haven’t really gone that far away from home.”

And in Leyden Township, American Legion Posts 159 and 974 hosted 45 recruits for a Thanksgiving celebration at West Leyden High School. In addition to a full meal, the recruits also had the opportunity to play ping pong and bag toss, watch football games and listen to music, and reach out to friends and families via donated computers, cellphones and calling cards.

"Everybody treated us like family," recruit Gregory Christian told the Chicago Tribune. "I felt very welcomed and thanked everyone for taking us in and giving us food and a lot of freedom."

The following are just a few of the other ways American Legion posts and Legion Family members helped bring a Thanksgiving meal to those in their communities.

At Swift-Murphy Post No. 32 in Safford, the Sons of The American Legion put on the 33rd annual Thanksgiving meal for hundreds of veterans, widows and families of veterans, and the community. The dozens of SAL volunteers also prepared 300 takeout meals for those unable to leave their homes and first responders in the area.

In Salinas, American Legion Post 31 sponsored a Thanksgiving dinner that fed hundreds of people. The post has sponsored the meal for two decades, with the help of many volunteers.

"They mean everything to us; without them we can't get it done,” Post 31 member Tony Virrueta told KSBW. “At the same time for this day itself it goes back to the whole term of Thanksgiving. We have what we need, I have what I need, but I think giving back a little, I think they get the same feeling as well.”

In Loveland, at the Associated Veterans of Loveland – which includes American Legion Post 15’s Legion Family – more than 500 volunteers helped prepare and serve a full meal for close to 1,000 sit-down and delivery meals.

“The community donates the food, and the community comes forward with the volunteers,” Sons of The American Legion Squadron 25 member Scott Drake told the Reporter Herald. “Most of these people are not members of this place – this dinner brings more people into this building that would never walk into this old, dark building than any other event of the year. And it brings the community together.”

• In Tallahassee, the 35th annual Thanksgiving Tallahassee celebration took place at American Legion Post 13 and was open to anyone in the Tallahassee community that was away from home or looking for a community to celebrate Thanksgiving with. Gov. Ron DeSantis was one of the volunteers helping out with the dinner.

• In Lake Placid, American Legion Post 25 hosted an appreciation luncheon for veterans and their spouses. More than 400 people were served meals during the course of the day. Veterans also were given turkeys and side dish ingredients to prepare a Thanksgiving dinner.

• James L. Melvin Post 379 in Boxford delivered Thanksgiving dinners to individuals and families in need prior to Thanksgiving. Legion Family members assembled full turkey dinners into separate boxes for delivery to local families. “It’s such a great activity we can all participate in and a tremendous gift to our neighbors in need,” Post 379 member Ian Fitch told Wicked Local Topsfield.

In Saranac, American Legion Post 175 hosted the annual free community Thanksgiving dinner. Around 150 people were served during the dinner, while another 50 meals were delivered to Saranac Senior Housing. Each meal included a handmade card with a note signed by one of Saranac Elementary’s sixth graders.

• For decades, Emmette J. Shields Post 55 in Hannibal has provided hundreds of Thanksgiving meals each year. That tradition continued again this year, with approximately 850 meals being served, delivered or carried out.

• In Springfield, American Legion Post 639 served a free Thanksgiving meal to around 150 people – including Legionnaire and World War II veteran Ed Fox, who fought in the Battle of Midway. “This is my family," Fox told KY3. "I can hardly put that into words. You feel it in your heart. The camaraderie.”

American Legion Post 159 in Chincoteague provided a free Thanksgiving dinner that focused on “the elderly, we have people that live alone, we have some that are home-bound, we have veterans and their families and we have some folks who are less fortunate that can’t even make it out that we deliver to as well,” Legionnaire Scott Edwards told WMDT. “I have a son in Arizona and a daughter in Washington State, I don’t get to see them very often, so instead of sitting at home by ourselves, we just volunteered to come on and help with this.”

In Williamstown, Post 159 hosted its 15th annual Thanksgiving dinner, serving between 200-300 people. The post also delivered cooked meals to those who couldn’t cook their own meals or leave their homes.