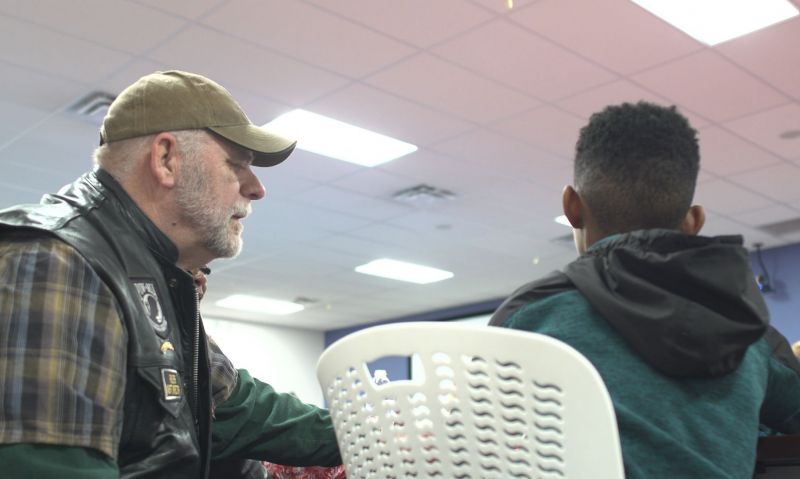 Post 341 Commander Jody Brown spends time getting to know the children during Saturday's event in Indianapolis. More than $2000 in gifts were donated by the Legion Riders Post 341 chapter located in Cicero, Indiana, to foster children during the event held on December 14, 2019. Photo by Josh Marshall | The American Legion

Reba James was “flabbergasted” when she saw all the gifts Dec. 14 at Choices Foster Care Solutions in Indianapolis.

There were toys, games, shoes, even football jerseys wrapped up in festive paper, gifts from American Legion Post 341 in Cicero, Ind., for 33 foster children served by Choices.

“It’s just such a generous, wonderful thing to see so much giving — and all the time, it’s not just the time here, it’s the time that was spent gathering the names, making sure everyone was taken care of, doing all the shopping, doing all the wrapping, and it’s not a little five-minute trip from where everyone is coming from to drive down here. It’s just a really joyful thing to see,” said James, the program director for Choices.

Dave Baughman, the director of Post 341’s Legion Riders chapter, said the event stemmed from a social media post he saw in August from a friend who works at Choices asking for school supplies for foster children.

“It was already taken care of, she said get back to me closer to Christmas. I reached out in October because we have to plan this stuff out. We jumped onboard with this and had a lot of fun,” Baughman said.

Post 341 Commander Jody Brown said Legion Family members spent over $2,000 on the gifts for the foster children, enough for at least three gifts for each child.

Brown said some 40-50 Legion Family members showed up at the post earlier in the week to wrap all the gifts.

Foster families with children from toddlers to teens filled a room at Choices Saturday morning for the event, which included pizza and desserts. Legion Riders from Post 341 handed out the gifts.

“It just brings a real joy to your heart to see these kids, to see their smiles; it’s just amazing,” Brown said.

James said, “A lot of times kids, especially the kids that are in foster care, they come from hard places. They’ve seen a lot of things that most grownups don’t see in their lifetimes. It’s just a good thing for them to be able to have some laughter and some joy and to really let loose and have fun.”