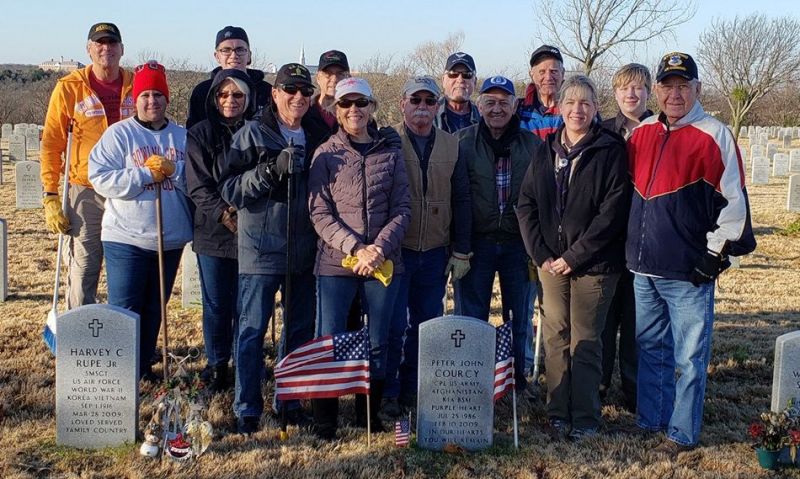 Fred Rogers made a promise to Mary Bush, the mother of Army Cpl. Peter J. Courcy, who was killed in a suicide bombing attack in 2009.

That promise has fueled the launch, growth and success of American Legion Peter J. Courcy Post 178 in Frisco, Texas. Since receiving its charter in January 2014, post membership has increased from 15 to more than 500 while fulfilling its community service goals.

“She was delighted because she wants Peter’s legacy to live on,” Rogers, the post commander, said of Bush. “And that’s the promise that we made to her. And that’s a very serious commitment for us to make sure that his memory lives on.”

Courcy will be remembered as a selfless soldier, an athlete — hockey and wrestling — and a practical joker. He was killed on Feb. 10, 2009, as a result of injuries following a suicide car bombing in Salerno, Afghanistan.

“He took the lead that morning and gave his life for it,” Rogers recalled. “He left behind his wife and baby.”

Courcy, who received the Bronze Star, also left behind an 11-day-old brother. “Luke is our mascot,” Rogers said. “We love Luke.”

Bush is a member of American Legion Auxiliary Unit 178 and Luke, now 11, is a common presence at the post’s celebratory events.

“We’ve been associated with this young man since he was about 5,” Rogers said. “We’ve watched him grow. He’s quite a young man. I kind of live through Luke.”

The efforts to create the post began in 2013 when Rogers raised $500 that funded mailings and other materials to raise awareness about the initial meeting. At that meeting, Rogers and others signed up 15 members — the required number to charter a post.

At the post’s first meeting in January 2014, members elected officers, agreed to send seven boys to Texas Boys State and approved naming the post after Courcy.

Inspired by their namesake, post members have grown their ranks to 528 now. Rogers vows to keep meeting membership goals. “We’re going to make it again — six years in a row.”

Rogers attributed the rapid and sustained growth to a businesslike approach. Post members plan out their objectives and analyze their progress, while using teamwork throughout the process. “We’re very goal-oriented,” he said. “We set our goals at the beginning of the year and then set out how we are going to do them.”

When it comes to membership, the post sets interim goals. By July 31, the post aims to be at 50 percent of membership and by Dec. 15, they aim to be at 100 percent.

Rogers was active with Boys State at the district level before launching Post 178. It was a no-brainer that it would be an integral part of the post’s community service. “I am deeply committed to Boys State,” he said. “I also wanted to do the Oratorical program. They are Americanism programs. But those give us an outreach into the schools.”

A post honor guard was another priority. “I knew for visibility and to be able to serve veterans, we needed an honor guard.”

Rogers envisions the post as being representative of all war eras and a place that is welcoming to all veterans. “We want a diverse post,” he said. “Our theory on membership is that we want them all. We are not specifically going to go after post-1990 veterans. We welcome everybody.”

And Unit 178 thanks everybody, said his wife and unit president, Glena Rogers.

“Our mission is to thank every single veteran we come across. We greatly appreciate their service.”

The unit also contributes to youth programs, sending more than 30 girls to Girls State in the past three years. This year’s goal is to send 15.

“I’m very proud of everybody and what we have accomplished,” Rogers said of the Legion Family. “We don’t look at activities; we look at we’ve actually done. We are very active in the community.”

That commitment to community is partially what drew in Rob Altman, a retired Army veteran who served in the 82nd Airborne and 101st Airborne, like Courcy.

“When the mayor has concerns about veterans, among the first groups he contacts is The American Legion,” Altman said. “Our post is one of the leaders in our community.”

Altman was not a member of The American Legion before joining Post 178 where he is the second vice commander.

“As I left the service, I knew I would need something to fill the gap of camaraderie,” Altman said. “Very quickly I have been welcomed to our Legion post over the last year and a half. I am very quickly building some great relationships here.”

Altman eagerly jumped into working some of the post’s programs.

“The core reason why The American Legion meant something to me is that the pillar of Americanism hits me in my heart. It’s just a part of me.”

Like Rogers, Altman never participated in Boys State or the Boy Scouts as a youth. But that does not stop either of them from prioritizing those now.

“Those are programs that mean something to me because I want my children to participate in those programs,” said Altman, whose wife is a member of the Auxiliary unit. “Service is important to me and my family.”

“It affected me emotionally because I had soldiers who I served with who were the Peter Courcys of their hometowns,” he said. “They didn’t come back home. Peter is a great American story of service and sacrifice, putting others above yourself. Peter’s legacy is important.”