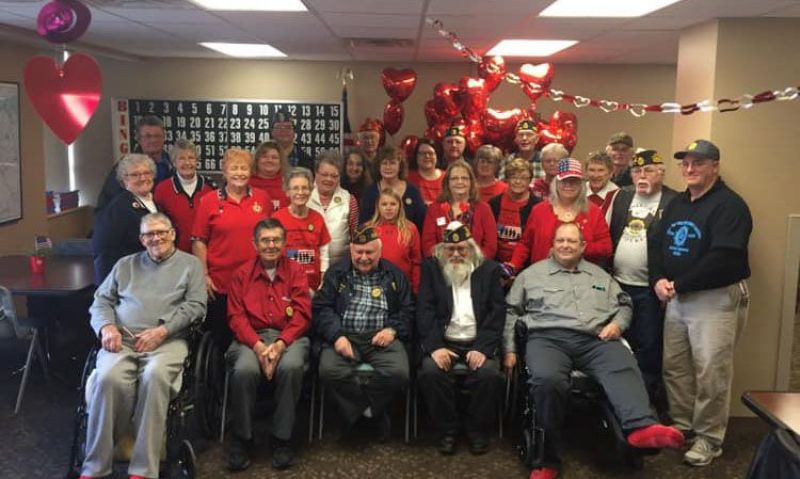 Sixty patients at the Grand Island (Neb.) VA Medical Center were provided an early Valentine’s Day party, thanks to members of the Nebraska District 6 American Legion Family. Approximately 30 Legionnaires, Auxiliary members, American Legion Riders and Sons of the American Legion brought the party to the patients, extending what has been at least a five-year tradition.

Nebraska American Legion District 6 Auxiliary President Angie Foster, a member of Silver Creek Auxiliary Unit 263, said the district originally did something for the VAMC’s patients for St. Patrick’s Day, but realized there was a big gap between all of the Christmas activities for patients at the medical center and March, so they decided to do something earlier in the year.

“It lifts their spirits,” said Foster, a past unit president and current member of the Auxiliary’s National Poppy Committee. “Several of the patients there are rehabbing. Some of them have surgery in Omaha and are away from their families when they’re sent to Grand Island.”

The Valentine’s event is a District 6 Auxiliary project, but it incorporates the entire American Legion Family – something Foster said the district tries to make happen in everything it does. “In our district, everything is opened up to the Legion Family,” she said. “We have pushed to have everything for the Legion Family. And the veterans in the hospital, they like talking to fellow veterans.”

The medical center’s patients were given red heart-shaped balloons tied to “goody bags” consisting of cookies, crackers and candy. And members of different Junior Auxiliary units made Valentines that were given to the patients.

Patients at the Grand Island VAMC receive extended rehabilitation services, memory care, long-term care and hospice services. Ken Ward, a recreation therapist at the medical center, told the Grand Island Independent, “There are no words that can really describe the impact that events like this have for our veterans.”

It’s also a special day for the Legion Family members, especially after seeing the reaction from recipients of the Valentines. “They’re very surprised to see us coming down the halls,” Foster said. “They love it because somebody is remembering that they’re in (the medical center). I talked to a younger veteran who was in there. He’s from Florida and happened to be up here in Nebraska, and he was like, ‘I don’t have a Valentine this year.’ So he was like, ‘This is so nice.’

“There were several tears from the younger ones. They’re just kind of glad that somebody remembers them. And they love snacks.”