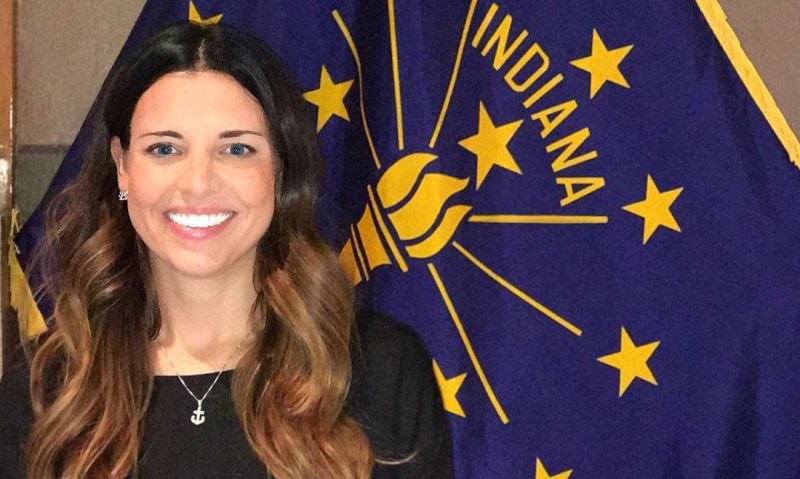 Blair Milo’s path to military and public service was inspired by her participation in American Legion Auxiliary Hoosier Girls State. Milo had never thought about military service prior to that point; her car ride home from Girls State changed that.

Born and raised in La Porte, Ind., Milo earned her bachelor's degree from Purdue University in Lafayette and was commissioned into the U.S. Navy in 2004. She served from 2005-2017, completing two Persian Gulf deployments that included serving as the anti-submarine warfare officer and electrical officer on the USS Mason, then transferred to the Destroyer Squadron 50 staff in Manama, Bahrain. After deployment in Bahrain and Iraq, Milo served on the Chief of Naval Operations staff at the Pentagon, where she worked on the Navy’s newest stealth destroyer ship class DDG-1000.

After transitioning from active duty to the reserves in 2010, Milo moved back to her hometown and found another way to continue her passion for service.

She joined Hamon Gray American Legion Post 83 and was elected mayor of La Porte – an election she won twice in 2011 and 2015 – which made her the youngest female mayor in the state at 28 years old. Now, 37, Milo serves as the State of Indiana’s first Secretary for Career Connections and Talent. She was appointed the position in 2017 by Gov. Eric Holcomb, where she is working to “attract, develop and connect a 21st century workforce.”

Milo’s passion for public service earned her the 2017 American Legion Department of Indiana Military Person of the Year (reserve category), and a spotlight in the Indianapolis Business Journal in February for its 2020 Forty Under 40 recognition.

The American Legion recently spoke with Milo about her military and public service path.

The American Legion: As a participant of Auxiliary Girls State in 2000, how did this program interest you in public service?

Blair Milo: “The West Wing” show (an American political drama TV series that aired from 1999-2006) was on around that time period, and I was fascinated with the show. And then I came across information about Girls State and the opportunity to connect in on kind of what government means and how to be a part of it, and being a responsible citizen – I thought this sounds great, absolutely. That experience at Girls State was truly, I think, the beginning of a journey in the world of public service for me that I was just fascinated with, as well as the opportunity of what good government service could be. I feel so blessed to have had mentors and inspirational leaders along the way that have cultivated it. But Girls State is where it started for me. And it was from that experience that I became interested in possibly the military.

Q: So Girls State led you to joining the U.S. Navy?

A: I can still vividly remember the car ride home from Girls State, where I had such a phenomenal week of learning so much about what public service is, what the process is for elected office, and the importance of civic engagement and the values that are intrinsic to the idea of America. I was really interested with how do I continue some of this. It was that car ride home that my mom mentioned it to me that well maybe you’d be interested in pursuing something with one of the service academies. It started the process for me of thinking through and learning more about the different services and then my sort of process of elimination being that I liked the Navy. I thought I want to serve and I like the water so let’s give this a shot.

Truly the car ride sparked it of that Navy piece, but the foundation had been laid prior.

Q: What leadership qualities did you gain from Girls State and the Navy that have guided you in your roles as a public service leader?

(With the Navy) I am so thankful for all of the leadership opportunities that I was provided … and to then gain the leadership development that my now civilian experience allows me to appreciate that military experience to understand that leadership development doesn’t happen in many other sectors the way that it does in the military. The way that the military helped me develop as a person, as a leader I’m forever grateful for. So I always encourage people that if they have some inclination to look into (the armed forces), to pursue it.

Q: You joined The American Legion following your transition out of active-duty service. What is your why for joining Post 83?

A: I was home visiting my parents and saw that the grass was past my waist in one of the parks near their house and that started the investigation process of what’s happening here in my hometown. Over the course of time I learned there was a challenge within the community and I wanted to come back and offer whatever services I could in leveraging some of the leadership experience I had from the Navy. So when I came back to La Porte, I wanted to get engaged in as many ways as possible to help serve the community and particularly wanted to be engaged with The American Legion because I knew they did a lot of supportive events for the community overall, but also for La Porte’s veterans community specifically. That Legion Post (83) had helped lay the foundation for me and my commitment to public service that I wanted to continue those opportunities for future generations.

Q: How did The American Legion support you as mayor of La Porte?

A: I don’t think I would have joined the Navy if not for the experience that I had with Girls State and what The American Legion provided for me in public service. I really enjoyed the opportunity to work with the post leadership and to work statewide with the Legion to support some of the girls going to Girls State.

We had conversations around a park that’s near the post that they were interested in being able to contribute toward supporting and improving overall. And they were really helpful too when I continued to stay engaged with shipmates and supporting individuals who were on active duty. Post 83 has been amazing and helpful in those efforts.

Q: Do you have an accomplishment during your time as mayor that you are most proud of?

A: I think a lot of times people want to point to specific tangible outcomes of which I’m really proud of the team for having many of those, whether it’s looking at the infrastructure improvement ($260 million in new investment) that we had, the growth in career opportunities (1,100 new jobs), those were things that we were all really passionate about providing across the city and part of what drove me to want to be engaged. But ultimately I just feel so thankful to have had the opportunity to work with an incredible team. And that as the military teaches us, the rule of the leader is not to create more followers – it’s to create more leaders. I think we’ve seen that across the community as so many people continue to step forward to serve and to continue thinking about problem solving in such creative ways. It’s an accomplishment of which I think much of my faith tells me that I typically try to answer God’s call to my life as well, then it’s an opportunity to have cultivated a community team that is continuously dedicated to serving not only the people of La Porte, but helping to set an example of what community can be all over the country and the world quite honestly.

Q: In your current role as Secretary of Career Connections and Talent, what are you working toward?

A: In this capacity we’re working to attract, develop and connect a 21st century workforce. That means we’re working to help grow the population, to help increase education attainment levels for people to be able to have the skills that are needed in an ever-changing landscape of what jobs are, and then to connect people up with those different types of career opportunities through not only developing some of those skills, but ensuring that they’re aware of what those opportunities can be. And we’re removing any barriers that may be in their way, whether it’s transportation, whether it’s access to child care, access to different types of wraparound supports that that individual needs in order to be able to take advantage of some really tremendous career opportunities that are growing across this state.

I work pretty regularly across all the different state agencies and departments, as well as across the state with community leaders, whether it’s superintendents of a school corporation or mayors, economic development leaders, trying to bring these folks to organize around how we are collectively working to do those three things of attracting and developing, connecting talent to Indiana.

Q: Have you been back to speak at Hoosier Girls State?

A: I had the opportunity to come (back to Girls State while mayor of La Porte) and give a speech and spend some time with (the participants). I chatted with girls about what their experience had been and just shared with them what my experience had been and how meaningful (Girls State) had been in my life that it led me to this passion for public service. It was such a special experience to get to engage with those gals. I had the opportunity to meet some of the (Girls State participants) from La Porte who then came to (La Porte) public meetings afterward. So really cool to be able to connect with those young ladies who I think have continued to take those lessons and the experience they received in their time at Girls State and continue to try and carry forward the banner of public service.

I’m thankful for the incredible work that The American Legion does with Girls State and Boys State. I’m particularly passionate about those (programs) because I think of the important role that they play in cultivating civic leaders for many generations. So just very thankful for all the work that the Legion does in so many different capacities.