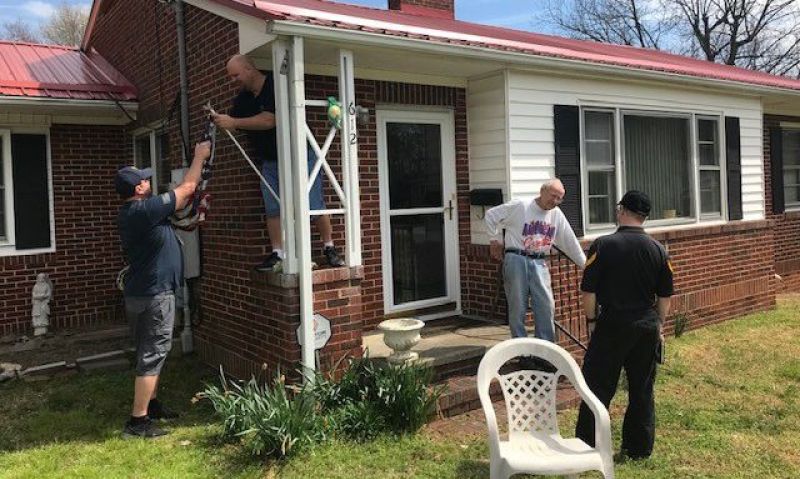 Lester Blackwell American Legion Post 138 in Roxboro, N.C., has made Buddy Checks a regular part of the post’s activities. Friday’s are typically reserved for visiting area veterans at their homes and assisted-living facilities. But the need for those checks has grown since the outbreak of the coronavirus pandemic.

“It’s really important to find out if they have any needs, how they’re doing,” Post 138 Chaplain Chris Talley said. “They’ve always been important, but it feels a bit more important now.”

Last Friday Talley joined Post 138 Commander Tim Carter, Sergeant-at-Arms Ronnie Jeffreys and Legionnaire Bruce Diggs in a Buddy Check on Stephen Morrow, a widower and Vietnam-era veteran. Morrow lost his wife five years ago and “has been pretty discouraged since his wife passed,” Talley said. “When we started visiting him, he started becoming more encouraged and really appreciated the time that we spent with him.”

The Buddy Check also included replacing Morrow’s worn American flag with a new one. The old flag will be retired by Post 138 at a future ceremony.

Though Talley said performing in-person Buddy Checks are more challenging because of social distancing, “we’ve all been trying to make calls to check on a lot of our veterans and keep up with them.” Talley said the post also is planning a Facebook Live event to offer words of encouragement to its members.

In Maryland, Joseph L Davis Post 47 American Legion in Havre de Grace has been taking advantage of social media as a way to reach out to its members. One recent graphic, “Because We Care About YOU,” urges any members needing assistance to call the post, including providing transportation to medical appointments or doing grocery shopping.

Post 47 also has set up a food pantry that is open to everyone in its community. The pantry features non-perishable items and is set up as a self-service drive-thru. Donations have helped keep the pantry fully stocked.

Other American Legion posts are stepping up around the nation to ensure their fellow veterans are not forgotten during this difficult time. And some posts are making community support a priority, assisting with meals and collecting important supplies for local families.

The following are just a few examples of what members of the American Legion Family are doing to help others. Those Legion Family members providing assistance to others during this time are urged to share their stories by emailing sbrooks@legion.org or posting on www.legiontown.org.

• In addition to hosting a much-needed blood drive, around a dozen members of Hollywood Post 43 have volunteered to reach out to elderly members via phone to ensure they have access to groceries, meals, essential needs and are being cared for. The post is making safe deliveries of groceries and toiletries to its at-risk members.

• American Legion Post 397 in Monterey Park has been helping the elderly, disabled and veterans in the community for more than 10 years through collecting essential donations. The post is continuing to do so during the coronavirus pandemic, collecting items for older veterans unable to leave their homes. All precautions are being made for those veterans not wanting to be exposed to the virus. “It's important to realize that it's not just us, it's not just our community, not just our post,” Post 397 Commander Gabriel Suarez told ABC7. “It's happening all over the world. If you poke us, we all bleed the same.”

Darren Dahlke, membership chairman for Post 6 in Stuttgart, reached out on Facebook to his fellow Legionnaires, posting a message that said “Our most sacred responsibility is to look out for each other and our fellow veterans. As a way to reach out to members and former members I am sending out this message asking if we can check up on our fellow comrades. Please take the time to reach out to our fellow comrade. Let it be just one email or a phone call. Reaching out, just to say 'Hello' can make the difference.”

In Bowling Green, American Legion Post 23 teamed up with the Good Deeds Club to set up a drive-thru restaurant at the post. They provided free sausage biscuits, coffee, doughnuts and toilet paper to the first 200 drivers on Tuesday and planned a similar effort for March 26.

Rosedale Post 180 has begun contacting all of its members, and those who don’t have a phone number or email listed will receive a postcard. “The Buddy Check is a very important part of who we are and why we are here,” said Past Post Commander Eric Warthen Sr., a member of Maryland’s Department Executive Committee. “Simply because someone pays their dues but doesn't come to the lounge or to an event does not mean that they are not worth our time, so reach out and let them know you care.”

American Legion Post 331 has been sending out postcards to its members to let them know they are not alone. “If you or a family member needs groceries, medications picked up, or transportation to a doctor’s appointment, please call your Post 331,” the postcard reads. Dave Sherwood, an 84-year-old member of Post 331, has even volunteered to assist other members.

Weehawken American Legion Post 18 is accepting canned goods and other non-perishables in order to support its elderly and needy veterans. Post 18 also has been calling its members regularly and bringing them their medications and canned goods.

American Legion Continental Post 1424 in Forest Hills is serving as both a collection site and a meeting point for volunteers who want to pick up supplies to deliver to community members who can't leave home.

In Albany, American Legion Post 10 teamed up with Southpaw’s Pizza to provided meals for staff and veterans at the Edward C. Allworth Veterans' Home in Lebanon, where one veteran had died and 15 others diagnosed with COVID-19. In addition to Southpaw’s Pizza helping feed volunteers and staff at the home for two days, American Legion Post 10’s Legion Family prepared a full turkey dinner with all of the trimmings. Post 10 Commander David Solomon told the Lebanon Express that the post will continue to support the veterans’ home as long as is necessary. “The veterans and the staff, they deserve only the best,” Solomon said. “As long as they need us, we’re going to be there.”

At the suggestion of the post’s chef and activities director, Mike Fowler, American Legion Post 28 in Spartanburg set up a food pantry to assist those who have lost their jobs because their businesses were shut down. The post is stocked with canned and dry goods for every meal of the day, as well as board games, coloring books and other items for children. “You don’t have to be associated with The American Legion. You don’t have to be a veteran. You don’t need any documentation, you don’t need ID. You just have the need. If you have a need, we’ll feed you,” Fowler told GoUpstate.com.

American Legion Business & Professional Post 10 in San Antonio put out a call on Twitter, challenging American Legion Family members to “reach out to 5 others today. Let them know you’re thinking about them. Ask them if they need anything. Be there for them.”

Post 177 in Fairfax was contacted by the Fairfax County Health Department, whose offices are about a block away from the post, to ask if the department’s workers could use 25 parking spaces at the post since the department had invoked the Emergency Response Protocol and was adding employees. Post 177 isn’t charging the department to park at the post and also has contacted city, county and state officials to let them know the post and its facility are available to assist during the pandemic.

Department of Washington leadership has called on its members to activate Buddy Checks. On behalf of Department Commander Robert Clark, Department Membership Committee Chairman Rafael A. Munoz-Cintron asked department Legionnaires to “not reach out only those that you may think their health might be at a concern at this time, but all of our members. There are others that may be in economic hardship and might be afraid to ask for help! A simple bag of groceries or snacks might make a difference in a family's life!”