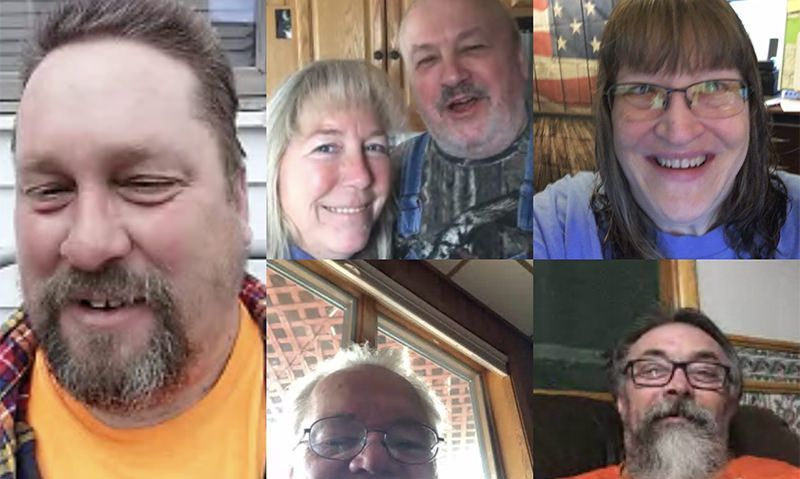 Minnesota Legionnaire Jennifer Havlick had perhaps a somewhat unique perspective when the coronavirus pandemic started. And it’s that perspective that led to Havlick, a member of American Legion Post 109 in Two Harbors, Minn., to not only take on making Buddy Checks on fellow veterans, but expanding those efforts – both in terms of services and the forum for those Buddy Checks.

In addition to devising an Enhanced Buddy Checks program that includes setting up Legion Family Response Teams that both reach out to veterans and offer services such as grocery shopping and pickup, Havlick also started setting up nightly Zoom video conference meetings for Minnesota Legionnaires looking to talk with a fellow veteran.

The ideas came from background in disaster response, where Havlick said she learned to look at those persons most vulnerable or in the most danger. “Here in the Eighth District 51 percent of our Legionnaires are Vietnam War veterans or older. That puts us right in the demographic of ‘uh oh. What are we going to do?’ These are our (most vulnerable). Vietnam veterans have an assortment of illnesses that could not go well with this virus.”

Havlick lives in a town with a population of 3,900, of which 250-plus are members of Post 109. Havlick holds multiple positions at the Eighth District level, including membership director, and when the coronavirus pandemic started to accelerate, she began calling the posts in the district to see how they were doing “and encourage them to call their members and see how they are doing,” she said. “I thought who would be more well-equipped to know and deal with our veterans who can’t leave home? I thought that some of these guys or girls are going to get to a point where they can’t leave home. What should we do to make sure – especially if they don’t have family – that we’re taking care of them? We want to make sure they have food. (Doing) something as easy as going to the pharmacy picking up meds for them, just so they don’t have to come out in the middle of this.”

Havlick and a small group of Minnesota Legionnaires also started doing Facebook chats, but when Havlick wanted to expand the outreach someone in the group suggested using Zoom. A past district and department vice commander, and U.S. Army veteran, Havlick said there were eight Legionnaires taking part in the first Zoom chat and four the second night.

“I think it depends on what is on TV and what people are working on. That’s why I set it for every day at the same time … there’s always the next day to do it,” she said. “I told everybody ‘I’m going to be here at 7 o’clock CST until we get through this,’ just so people know they have somewhere to go and talk to people – even if it’s just me. It’s somebody out of your wheelhouse because you can’t go anywhere.”

Havlick also serves on the Department of Minnesota’s Strategic Planning Committee and hopes to work with the committee to fine-tune a process that would provide Buddy Checks and outreach to members in future emergency situations such as the current pandemic.

But Havlick said the COVID-19 outbreak hasn’t just brought about a need for Buddy Checks on veterans. “We need to help our active-duty (military), reservists and National Guard because … they’re being deployed,” she said. “Who’s going to take care of their families while they’re gone? That’s supposed to be our job.”

Havlick’s efforts in Minnesota are part of a nationwide effort by American Legion posts and individual Legionnaires to reach out to fellow veterans via Buddy Checks during this difficult time. The following a handful of examples of posts and individuals taking on this critical task.

And for those wishing to start Buddy Checks during the coronavirus pandemic, we’ve created a downloadable toolkit to assist those efforts.

• At Riverside Post 289, Post Commander “Irish” Mike Buchner is reaching out to members of the post to ensure they have whatever they need and offer support. Buchner said he’s also asking other members to “to pay it forward and contact five members once they have been contacted. Our elders are our most prized possession, and we will do all that we can to ensure they're safe and comfortable. No member should feel alone".

• In Woodland Hills, American Legion Post 826’s Executive Committee has formed a team to reach out to the post’s World War II and Korean War veterans. The aim is to check on needs of these older veterans during this COVID-19 driven stay-at-home period and provide services to those in need. The post is making a contact list using its electronic roster and contacting those veterans. Via Legiontown.org, Post Adjutant Larry Van Kuran said those making the phone calls are noting if a veteran is in need of help with grocery shopping, prescription pick-up and other amenities and food donations.

In Springfield, Post 32 member and National Convention Commission Chairman Mike Walton used the media to get the word out about Buddy Checks. Walton’s press release appeared broadcast and print media outlets and stated the Post 32 would be conducting Buddy Checks on local veterans.

"As many of you know with PTSD and other problems, having to stay in and not have contact with others and the outside world could seriously affect the mental health of many of our brother and sister veterans,” wrote Walton, “so please, do as The American Legion is doing nationwide and call a veteran and make sure they are doing ok.”

Fort Scott Thompson-Harkey Post 25 is “pushing” Buddy Checks during the coronavirus outbreak, Post 25 Commander Carl Jowers said. “Several post officers are reaching out to our members who do not use email and are checking on them.”

Members of American Legion Post 156 in Ellicott City already were discussing Buddy Checks before the coronavirus pandemic took off and have turned their discussions into actions. Twelve members have volunteered to regularly stay in contact with the post’s 450-plus members during the state’s stay-at-home mandate. “We are a resource for our members should they have any needs arising during the coronavirus emergency,” Post 156 First Vice Commander Vance Blakely said. “We are also asking our members to provide a self-assessment in three categories: their physical, their mental and spiritual well-being. We want to know how our members are adjusting to the social isolation that many of them are experiencing. To alleviate that, we are encouraging them to also contact us if they simply need someone to talk with.”

American Legion Paschall Post 164 in Grove City conducted a mass Buddy Check, contacting nearly 330 member through the efforts of Post Commander 164 Jefferey Shipley and his executive board. “(The) American Legion has a sacred responsibility to look out for and to support fellow veterans within their local communities” said Jermaine Ferguson, the Department of Ohio’s Veteran Affairs & Rehabilitation and National Security Coordinator. “Veterans who need assistance may not know where to go or who to ask, especially in times of crisis.”

Mark Eldridge, commander of Post 283 in Sayre, said by March 23 his post had distributed more than 24 essential items packs to its most at-risk members, encouraging those members to shelter. The post also was gearing up for phone wellness checks on its members.

District 20 Commander David Mills posted on Facebook that in between breaks of working outside, he came into the house and “called and checked on veterans and their families, most that are shut in and some that have been sick. They really get a kick being remembered and thought of. So remember this, you may be stuck home and bored, but there are … worse situations. A friendly call and well check make a big difference to those that think they are all alone. Take a moment and let them know they are not forgotten.”

Virginia Russell, commander of Post 539 in Green Bay and the Brown County commander, is sending emails to the 72 post members with email addresses, sending cards to those members who are in nursing homes and are unable to be visited in person, and making calls to those without an email address. Russell also sends out birthday cards each month to members celebrating a birthday.

“I even have sent to those who have not renewed just to let them know they are in our thoughts and prayers,” Russell said. “I do this once a week. It's my way of letting them know I care about them.”