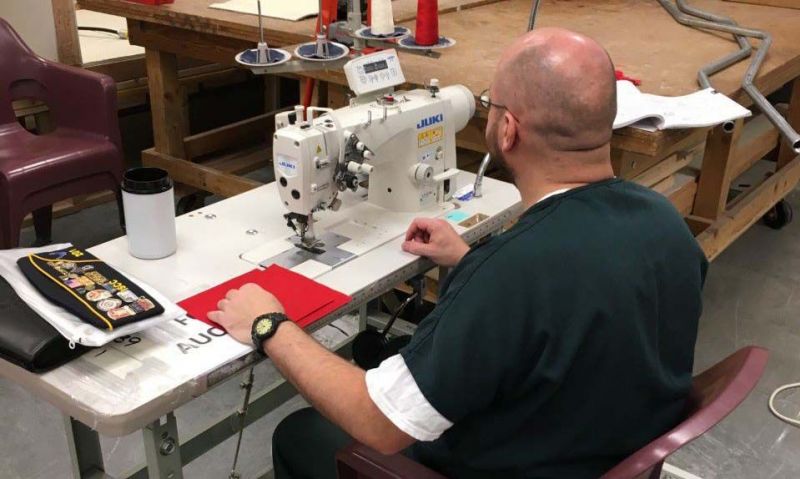 American Legion Post 201 inside the Idaho State Correctional Center (ISCC) was chartered in early 2017, becoming the first of its kind in the state. The 34 Legionnaires and 25 Sons of The American Legion members of the post have been active from the start with volunteer efforts that support ISCC’s inmates and the surrounding Boise community.

Several Post 201 members are volunteering their time to make cloth face masks for ISCC staff members and inmates, and the general public to help slow down the spread of the coronavirus.

Post 201 Commander Albert Ciccone told the Idaho Press that making the masks was another way to give back. “It makes you feel like a citizen of this world, because we all want to come together and help out,” he said. “That’s redeeming in here.”

Idaho Department of Correction officials would like at least 30,000 face masks to be made for individuals to receive three each. As of April 10, the ISCC has not had a confirmed COVID-19 case; however, having the masks ready is a way to prepare for when that day comes and mask-wearing is mandatory. Materials to make the masks have all been donated, and inmates are using sewing machines to make them.

Besides helping to make face masks, Post and Squadron 201 members completed 235 hours of deep cleaning because of COVID-19 in the month of March alone. Those hours are part of the 1,066 service hours the members completed last month, which Ciccone shared with Past Department Commander and current Department Adjutant Abe Abrahamson. Other service hours last month included:

• Bike shop: 268 hours and 46 bikes completed. The donated bikes refurbished by the post members are provided to local children at no cost to their families.

• Crochet: 150 hours of making blankets that Abrahamson has picked up and then delivered to a women’s shelter for newborn babies, and to the veterans home in Pocatello and Boise.

• Toy cleaning: nine hours of cleaning toys in the visiting room for inmates.

Abrahamson was instrumental in getting Post 201 started at ISCC as a way to provide incarcerated veterans the same comradeship they had during their military service. Post 201 is not only affecting inmates by reinforcing service to others, it’s also making an impact on family members of inmates.

Abrahamson recently received a letter from Doug Meyers, whose son Michael is a member Squadron 201. Doug started his letter off by saying, “I think that what you guys are doing is amazing and would like to tell you how my life has been affected by your efforts.”

Doug shared that Michael, who has epilepsy, has been in and out of jail for the past 10 years, which has been hard for Doug to witness. “Rarely have I gone out to see him in person," Doug wrote. "In the past he seems down and avoids discussing what he is doing in there.

“Over the last few months I have seen a dramatic change in Michael's attitude and behavior. For the first time he was talking about wanting to get out of prison and be a good man, so I decided to go visit him in person. He was smiling and actually able to look me in the eye! He told me that he had joined a volunteer organization, Sons of The American Legion, and was moved to a special housing unit where he could help veterans and be with inmates trying to better themselves and others.”

Right before the new year, Michael had a seizure. He stopped breathing, but a Legionnaire came to his rescue and “saved his life!” Doug said. "I am so grateful that The American Legion and IDOC have worked together to create such an amazing environment for these men, and I am so excited to see my son start the next chapter in his life. I hope that this program is made available to all inmates seeking to become positive members of society.”