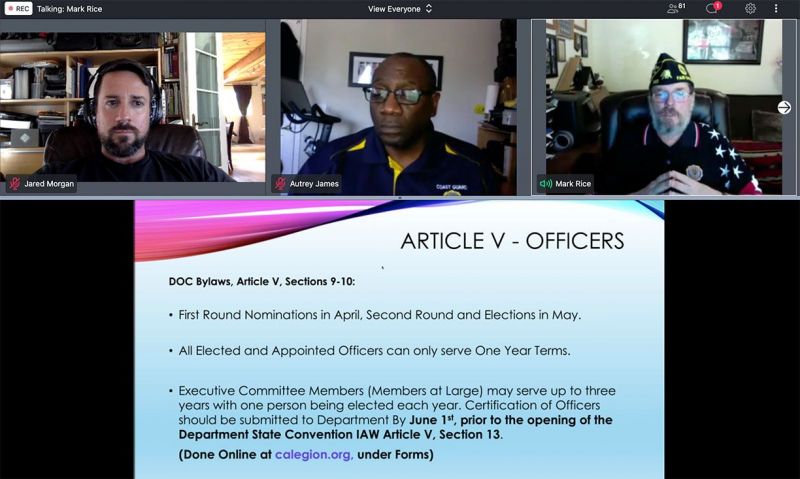 As people shelter in their homes to slow the spread of COVID-19, American Legion members are being forced to rethink how they operate. Within days of California’s March 19 stay-at-home order, a team of Legionnaires worked quickly to bolster training efforts and conduct virtual sessions.

Almost 100 people attended a webinar on post bylaws held by the American Legion Department of California on April 19. The online training session covered how to write and amend post bylaws but illustrated the importance of utilizing digital tools to conduct business in this time of social distancing.

“Once we’re past the current pandemic situation, we will take what we learned for all our efforts and start preparing for when this may occur again,” said Mark Rice, chairman of the department Constitution & Bylaws Commission. “We also wanted the posts and districts to understand that department is working hard to provide support so that we will grow and prosper no matter what is thrown at us. This is how we Legion in California.”

Throughout the United States, Legion posts are facing difficult decisions on how to handle annual elections and other business decisions. The advice from National Judge Advocate Kevin Bartlett is for posts and districts to consult with their department judge advocate on what is legal in their particular state because laws vary widely.

In California, many of the more than 400 posts are postponing or canceling annual elections because of uncertainty caused by quarantine mandates. Questions regarding electronic meetings were raised during the webinar. Autrey James, California’s Training Committee chairman, said the department would continue to work to find general best practices that can be applied to all posts.

“Right now, posts are trying to figure out how to balance the law, their bylaws and our current conditions,” he said. “They need our department to help them find solutions.”

The American Legion National Executive Committee recently drafted a resolution canceling the organization’s annual convention. In an email to department leaders, National Adjutant Daniel Wheeler said the national organization would keep its officers in place until next year and suggested they all follow suit, “Irrespective of whether or not departments decide to hold conventions or some type of electronic communications for the purpose of electing officers.”

“It took a lot of our older members out of their comfort zone, but they did it,” said Post 283 Commander Jere Romano. “That was my biggest concern going into this, alienating our older members, but they participated and asked questions.”

One member joined the video conference using his son’s babysitter’s laptop, “but he put his face in front of the camera and I recognized him,” Romano said.

Other members without video capabilities phoned in and because they regularly attend meetings were recognized.

“I think something like this can work for smaller posts, but what are you going to do when you can’t recognize them?” Romano said. “It may not work for larger posts. I still think we should have our DECs and maintain one-to-one contact — for all the negative attention bars bring to the Legion, a lot of great collaborative projects develop over cocktails — but with commission and committee meetings, maybe occasionally holding meetings over video conferencing is the future.”

Post 283’s general membership meeting illustrates one of the biggest problems presented by electronic assembly — voter authentication. It was one of Newport Harbor Post 291’s chief concerns when its executive board recommended canceling its annual elections and keep all officers in place. Its first vice commander, Jim Updike, researched possible solutions like contracting with an election services company. That option was scrapped for several reasons, including a cost of between $5,000 and $8,000 and the potential for ballot harvesting.

“I’m personally skeptical of voting over the internet,” said Jon Reynolds, commander of Post 291. “And we have many members over the age of 65, who are more susceptible to this virus. These people are concerned about coming to the post anytime soon.”

The executive board of the 4,000-member post recently voted unanimously to cancel elections and Reynolds called a special meeting to be held April 29 to seek final approval from the general membership.

Reynolds said he and his officers were initially worried about whether the California Corporations Code would allow them to remain in office. They found a provision allowing for a waiver of a specific bylaw without need for an amendment with a simple majority vote of its membership.

A big part of the Department of California’s assisting of posts has centered on its website, caLegion.org, which was relaunched late last year. All of the department’s training sessions and relevant materials on its Online Training and Online Meetings pages, which are regularly being updated.

In addition to leading the bylaws webinar, Rice worked with Rick Pushies to develop online meeting resources for California’s Legionnaires. Other training topics on the site include how to carry out the duties of a post service officer and how to perform Buddy Checks. Future webinars are currently in development.

“What I see right now is members need to be engaged — it is difficult but necessary to stay at home,” James said. “The Buddy Checks are important, checking on our shut-in Legionnaires is very important to ensure we meet their needs. Equally important is providing opportunities to individual Legionnaires to do something other than just sit at home during this pandemic. Our members, given the opportunities, will show up to help those in need. We have proven this time and time again.”

“Look across the nation at Legionnaires hosting blood drives, making and delivering meals to people in need and delivering groceries or medicine,” James said. “These are vital needs that our local governments can’t do alone, but our Legionnaires can and are doing. This is the chance to remind our communities and others that we are much more than a bar, we are and will remain an integral part of the communities we serve.”