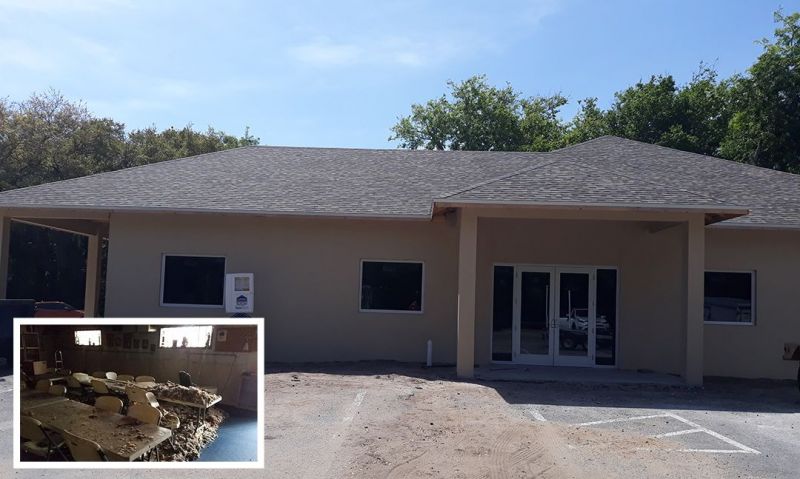 In the early morning hours of Jan. 25, 2019, an electrical fire engulfed the inside of American Legion Post 270 in Port Orange, Fla. Thankfully, no one was in the post building at the time.

The fire caused extensive damage inside the 2,500-square-foot building at 119 Howes Street. As a result, membership decided to call it all a loss, as the cost to repair, as well as to bring the 60-year-old building up to code and ADA compliant, would be too costly. So the building was torn down.

The rebuilding process of Post 270 on the same plot of land started early last November once all permits were accepted. It was agreed by membership for the post to not buy new or rebuild elsewhere in the community because the post is home to nearly 500 members – Legion, Sons of The American Legion, Auxiliary and Legion Riders – who live within a few miles.

“Many of our members live very near to the post home and it is like their second home,” said Bob McLaughlin, post adjutant and finance officer. “They come for the camaraderie, entertainment, dinners, etc.”

Post 270 found ways to help offset the cost of rebuilding, which included fundraisers held at nearby Port Orange Fraternal Order of Eagles Aerie, donations from Legion Family members, community businesses and other organizations, and a Home Depot Foundation grant that McLaughlin applied for. The $24,000 Home Depot grant helped the post with building materials such as paint, drywall, plumbing fixtures and flooring.

“They all have been very supportive,” McLaughlin said.

Post 270 hopes to receive its certificate of occupancy by June 1 to open its new 4,300-square-foot home to its members and community. The new building has office space, a larger kitchen and canteen area, and it's ADA compliant.

“We are now very pleased to be able to accommodate many of our elderly and disabled veterans with easier access to our facility,” said McLaughlin, a two-time Department of Florida Adjutant of the Year recipient, who is excited to have the post reopen to its members and community. “(Post 270) was chartered in 1949, and we have been serving veterans and their families in the community ever since.”