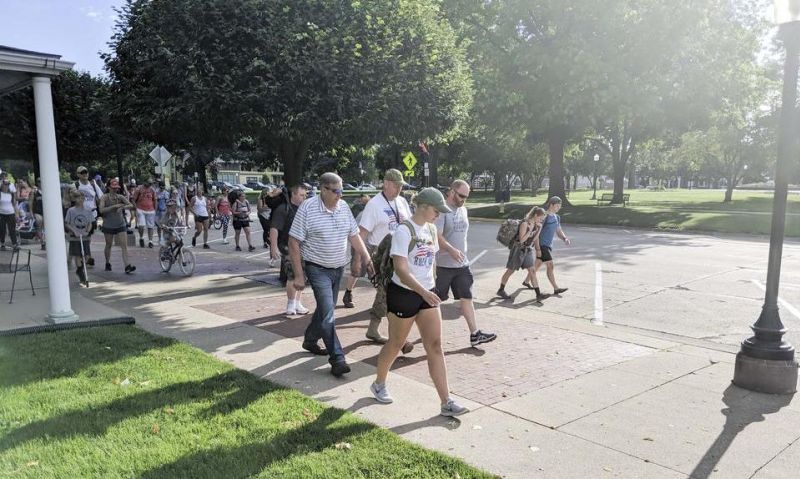 A year ago, Van Veen-Van Hemert American Legion Post 89 in Pella, Iowa, staged its first annual Fourth of July Ruck to collect food for the Pella Community Food Shelf. Ruck organizer and Post 89 Executive Committee Member David Robbins realized that the food shelf, which also provides prepared meals for those in need, doesn’t get the donations during the summer that is does during the holiday months in the fall and winter.

With the coronavirus shuttering businesses across the nation, leaving millions unemployed, Robbins realizes this year’s ruck is even more important.

“Here in Pella, the (Food Shelf) is just completely zapped almost every day,” Robbins said. “Our town to our south, Knoxville, their (food bank) is responsible for almost 25 percent of all of the Iowa food banks’ donations. And that was last year when we didn’t have Covid. I’m sure a lot of places are getting hit. A lot of people just don’t know what this year is going to bring.”

The ruck will take place from 9-11 a.m. July 4 and starts at the Pella Memorial Building. Members of the community wanting to participate are asked to bring a backpack or ruck bag filled with donations for the Food Shelf and carry it along a pre-planned route.

Those who want to assist the effort but don’t want to participate in the ruck walk can still bring donations during the event. Robbins said around 70 people participated a year ago.

“We wanted to get something out in the community. Our (post) doesn’t have a bar. We just use the Memorial Building,” said Robbins of the inaugural ruck walk. “So getting out in the public eye is a little more difficult in our town. The idea came from being more visible. So that was the initial beginning.

“The fact that we did a food ruck – a lot of people donate food around the holidays, especially in the winter. A lot of people don’t think about those food banks being short in the summer. We thought this was a perfect in-between time to do that sort of thing.”

The 32-year-old Robbins said projects like the ruck walk are an extension of military service. “As a veteran – especially a combat veteran, from my perspective – we work so well in what I consider controlled chaos,” he said. “That’s exactly what this is. A lot of people don’t understand that once chaos begins, once that monkey wrench gets thrown in, a lot of things go south quickly. We just wanted to bring any form of stability we could to as many people as possible.

“We’ve had our major events canceled for our town. Our Fourth of July is probably the first event of the year that we’re not cancelling. Ruck marching, it’s so easy to be socially distant. And it’s a wonderful exercise where you can carry on a conversation.”

As we’ve been doing since late March, the following is a broad stroke of what American Legion Family members are doing to assist their communities and celebrate patriotic holidays. Please remember to email sbrooks@legion.org to share details on the total efforts of your American Legion post and Legion Family efforts.

As coronavirus totals continue to rise in the state, Travis L. Williams Post 65 in Phoenix is teaming up with several other area organizations and local government to provide free COVID-19 testing on four days over the next two weeks.

The post is joining with the HeroZona Foundation – which was founded by Post 65 Second Vice Commander Alan Powell – Salt River Project power and water, Maricopa County’s District 5 and the Arizona Chamber of Commerce and Industry to offer free drive-thru COVID-19 testing at South Mountain Community College. The testing is available July 2, July 3, July 9 and July 10 from 8 a.m. to 6 p.m.

The testing will be conducted by Lab24, a family owned business that operates nationally with a focus in molecular testing. No pre-registration is needed; those attending do not need to have symptoms present to be tested, and the test will only check for viral symptoms, not antibodies.

“Additional testing is needed immediately in South Phoenix to keep our communities safe,” Powell said. “We created this event to help bring additional testing sites to areas that need it the most.”

What has become a Fourth of July tradition in Newport Beach will continue, thanks to American Legion Post 291. The Old Glory Boat Parade, which has gone on for 70 years, will go on as scheduled after the American Legion Yacht Club (ALYC) was granted permits to hold the parade.

Boats will be adorned in red, white and blue, American flags, and themed decorations honoring frontline heroes. The parade will be a salute to personnel who served on the USNS Mercy, the Army Corp of Engineers who built hospitals, and frontline medical professionals in the community. Spectators will be asked to maintain social distancing.

“It was a long shot to get a permit, but knowing how much this parade means to the city and the community, as well as our American Legion Post 291 family, we knew we had to make a special appeal to the mayor,” ALYC Commodore Bruce Batcheller, a member of Post 291, said in a released statement. “We recognize the parade won’t have quite the impact as in years past with the loaded boats and packed restaurants and beaches, but it can be a well-timed shot in the arm for our city and local area that really needs something to look forward to.”

Frank Wendland Post 253 in Royal Oak teamed up with Mission BBQ to send 255 box lunches to the doctors, nurses and physician assistants at the Detroit VA Medical Center.

Led by its Sons of The American Legion squadron, the Wicks-Staley Post 231 American Legion Family in Clayville had a chicken barbecue to raise funds for the local Feed Our Vets food pantry. The effort raised $1,125, which was presented to food pantry director Joseph Ancona.

With the traditional North Carolina 4th of July Festival in Southport canceled because of the coronavirus, the festival committee decided to create a series of online events.

American Legion Post 543 in St. James contributed a “Salute to Veterans” video that included a flag ceremony honoring all five branches of the U.S. Armed Forces. Watch the video here.

In Lewisburg, the Union County Veterans' 4th of July Parade Committee was canceled due to the coronavirus, so members of the community organized a “Support Our Veterans Driving/Walking Parade.” Members of American Legion Post 410 in Mifflinburg set up flags from the branches of the military and POW-MIA flags.

"We're out supporting our veterans," Post 410 Legionnaire Troy Zimmerman told The Daily Item. "It's a shame the parade had to be called off. We understand why, but we still wanted to fly the flags and let the veterans know we support them."