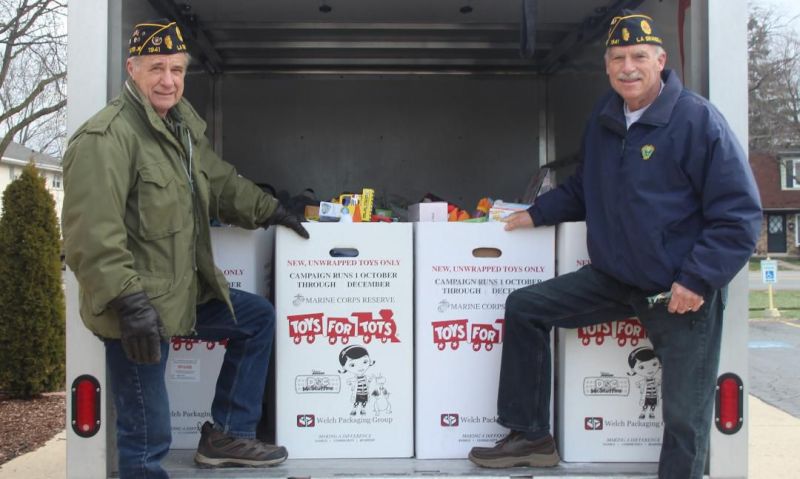 For many, 2020 has been a difficult year. The current pandemic has created a year of loss, whether that of a loved one or a job; separation from family and friends for the health and safety of everyone; political and racial tensions; and loss of homes, personal belongings and lives from devastating hurricanes.

In the midst of this difficult year, the American Legion Family continues to show veterans, children and their families in need that they are not forgotten.

American Legion Post 1941 in La Grange, Ill., held its annual toy drive Nov. 28 that resulted in a record number of toys being donated for the Marine Corps Toys for Tots program.

“The success cannot be overstated,” said Bill Kiddon, Post 1941’s toy drive event chairman, to the Chicago Tribune. He said the Post 1941 toy drive normally results in 350 to 400 toys being collected. That number soared this year to more than 1,200 toys donated along with over $1,000 in cash donations. Kiddon said about 300 vehicles dropped off donations.

The toy drive was held outside of the post to take precautions with COVID-19. Post members put up a drive-thru sign over the toy drop-off banner and had drop-off lanes set up.

“It really felt good to see the community respond like this,” Kiddon said. “The pandemic has made things difficult for everyone, and I think a lot of people felt it was more important than ever to help kids in need this year.”

The following are some of the ways American Legion Family members are providing, or have provided, joy this holiday season.

For about 50 years, American Legion Auxiliary Unit 100 in Rogers has hosted a Christmas store for veterans to shop for loved ones – all free of charge. The Veterans Christmas Store was held this year from Nov. 30-Dec. 2 inside Post 100 where all safety precautions of social distancing and the wearing of masks were taken.

“If you’re a veteran and you’re in need and you can prove you are a veteran in need you can come and do Christmas shopping free of charge,” said JoAnne Cobb, president of American Legion Auxiliary Unit 100, to KTVZ.

American Legion Post 84 and Sons of The American Legion Squadron 84 in Auburn collected new household items such as pots and pans, silverware, dishes, soap and more. And Chapter 84 American Legion Riders collected new clothing for men and women, such as socks, underclothing, T-shirts, sweatshirts and other items. Items were dropped off Dec. 5-6 at the Veterans Hall. The donations will be delivered to Volunteers of America for the homeless that are transitioning into housing.

Northwest DuPage American Legion Auxiliary Unit 1084 in Roselle is providing holiday cheer for children and families in need through the United Methodist Food Pantry and Teen-Parent Connections by hosting "The Giving Tree." Donations are accepted for infants to pre-teens until Saturday, Dec. 12.Donations can be dropped off at Dick Wickstrom Chevrolet, 555 E. Irving Park Road, Roselle.

American Legion Post 357 in South Bend held a Toys for Tots collection drive to provide kids in the community with gifts to unwrap on Christmas.

“I know a lot of families in this area are hurting," American Legion Post 357 member Wayne Zwierzynsky told WNDU. "Like I said, this is a local Toys for Tots drive, so it helps local families in this community. That’s why it’s very heartfelt for me to see such a great turnout at all of our events, and this year more than ever because of COVID.”

American Legion Post and Auxiliary Unit 246 in Betterton is having a Drive-By Santa Visit on Saturday, Dec. 12, starting at 3:30 p.m. Pre-registered children will receive a gift from Santa. For additional information, contact Patti Bone at 443-298-0057 or Michael Heffron at 410-708-4872.

Over the past few years, the post and unit hosted a children’s Christmas party with live music, food and Santa.

- American Legion Unit 188 in Sandwich will host a Children's Christmas Drive-Thru on Saturday, Dec. 12, from 3-5 p.m. outside American Legion Post 188 at 20 Main Street. Bags of treats will be handed out to children, Post 188's Christmas tree will be lit, and Santa Claus and the Grinch, along with other holiday characters, will in attendance for the children. The event is open to the public.

American Legion Post 443 in Sanford conducted its eighth annual ToyZ for KidZ drive. Toys collected will be distributed to students in the surrounding school districts.

“The need is even greater this year because of the dam failures and subsequent flooding,” said Post 443 Commander Mark Authier to WNEM. “Even though we’re currently shut down because of the pandemic, that doesn’t mean the community need isn’t there.”

“That’s what Christmas is all about. The American Legion services not only to veterans and their families, but also the communities they’re located in,” Authier said.

American Legion Post 627 in Nisswa hosted its annual children's Christmas party Dec. 6 as a drive-thru event where kids received a stocking from Santa and Mrs. Claus.

American Legion Riders Chapter 5 in Jefferson City hosted its first Christmas Teddy Bear Run on Dec. 5. The Riders teamed up with the local 40&8 to host the event, which provided children of special needs with Christmas gifts.

For the past several years, the children came to the post for a meal, a visit with Santa, and live music. Due to the pandemic the Riders couldn’t have the kids at the post so they hosted the run.

The cost to participate in the run was a teddy bear, with the goal of 200 teddy bears.

Post 184 asked local families in need to register for a toy for their child; the toys were placed on an Amazon Wish List made public for anyone to purchase. The toy list has been purchased with toys continually to be added.

“I am very surprised how easily this took off,” Post Commander Harry Weimar told the Press of Atlantic City. “The Legion is very thankful for the community at this time. We are happy to organize this event, and I want to thank all the donors and volunteers for helping us make a good Christmas for kids.”

In addition to the toys, Post 184 is asking for donations of winter clothing, diapers, food and Christmas dinner. Information is available at facebook.com/legion184.

American Legion Auxiliary Unit 265 in Garden City is accepting donations of gift cards and new sweat suits in the colors of navy, light blue or gray. Size M-2XL. The donations will be provided to veterans at the Northport VA Medical Center. Monetary donations are also accepted. Checks can be made out to the American Legion Auxiliary Unit 265, and sent to P.O. Box 8, Garden City, NY, 11530. Sweat suits can be dropped off at the Wysocki house at 38 Locust Street, Garden City; or you can call 516-742-3696. Deadline for donation drop off is Dec. 13.

- American Legion Post 168 in Cannon Beach is hosting its annual Giving Tree where children in the community receive a Christmas present.

The Giving Tree is located in the lobby of the Wayfarer Restaurant and Lounge, 1190 Pacific Drive in Cannon Beach. Members of the community are encouraged to stop by and pull a card from the tree with information about a child in need.

Wrapped presents can be returned to the Giving Tree and will be delivered on Dec. 23 to area children by members of American Legion Post 168.

Families in need can pick up a Giving Tree application at Post 168, 1216 S Hemlock Street, and fill it out. Applications must be returned to the post.

- American Legion Post 10 in Albany is hosting its annual toy giveaway Dec. 19 for about 1,500 local children "who, due to the pandemic, would not have a Christmas," said Post Commander David Solomon. The toys will be handed out at a local Walmart parking lot where Santa will be there for pictures. Masks and social distancing is required.

The James F. Daniel Jr. American Legion Post 3 in Greenville launched fundraising efforts for its Goodfellows Food Drive on Thanksgiving Day. So far more than $9,000 has been contributed to help provide over 1,000 local families in need with a basket of food this Christmas season.

The food drive, which started in the 1920s, typically provides a 40-pound box of groceries, consisting of about four meals for a family or an individual. The boxes contain staples such as sugar and flour, along with dried beans, fruit, potatoes and chicken.

This year, the group is seeking to raise $34,000 to buy the food, said Post 3 Adjutant Don Patterson. Monetary donations may be mailed to The Goodfellows Club, P.O. Box 133, Greenville, SC, 29602. Credit or debit card donations are also accepted. For more information or to make a donation, call 864-230-7960.

“Children of the military who serve our country shouldn’t go without on Christmas," said Donna Harrell, a member of Unit 453 whose father, Jerry Smith, was a member of Post 453, to The Dallas Morning News.

The Pajama Drive was started in 1999 by the late Shirley Jean Gray, a veteran’s widow who died in May of this year. Initially, the pajamas went to the Buckner Children’s Home, which later became part of a program for the Dallas VA Medical Center and the Fisher House, both of which serve families of veterans.

More than 440 sets of pajamas were collected for distribution this season. Plano’s American Legion Post 321 also helped with the collection.

Prior to Christmas, the donations will be handed over to a VA social worker for distribution.

“We want to make sure that any vet who cannot go shopping can at least have pajamas for their kids,” Harrell said. “The pajamas are placed under each family’s tree, a gift for the children from their parents, with no note from us.”

American Legion Post 141 in Silver Lake welcomed Santa Claus on Dec. 5 for a drive-thru event open to all children 10 and under. Children remained in their family vehicle due to COVID-19 restrictions and precautions while Santa handed each child a bag of candy and a gift.

If your American Legion post and/or Legion Family is part of a special holiday event, please share the story and photos at legiontown.org.