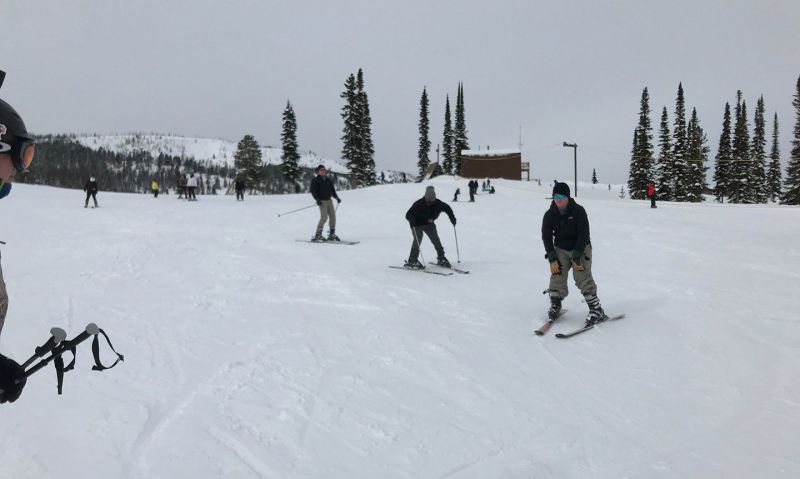 Photo by provided by Chris Kurinec.

Members of American Legion Post 91 in Corvallis, Mont., know the mental toll that military deployments, combat and reintegration can have on active-duty servicemembers. They also know the mental health benefits reaped from the outside beauty surrounding them in the state of Montana.

Over four days in late February, Post 91 hosted its first reconnect event for 10 active-duty servicemembers and their spouses with an all-expense paid trip to Montana for skiing, camaraderie and respite.

The servicemembers came from Joint Base Lewis-McChord outside of Tacoma, Wash., representing the U.S. Air Force Special Tactics Squadron, Army Rangers, Army Special Operations Aviation and 7th Infantry Division. Their invitation to join Post 91’s reconnect event was made with a phone call.

“There is nothing more fun than leading off the conversation with ‘Hey, are you free to come skiing in Montana?’,” said Chris Kurinec, public relations officer for Post 91. “The whole red carpet got rolled out – it was five-star treatment – and that’s a big deal to these young troops.”

“We were able to teach them, ski with them, and just maintain contact with them the entire day,” Kurinec said. A few of the servicemembers had never skied before and one had never seen snow, but by the end of the trip Post 91 member John Nolan had the men in the terrain park doing skiing tricks. But when the Legionnaires and servicemembers weren’t skiing down the slopes of Lost Trail, over meals together they shared camaraderie, war stories, and their why to serving in the military.

“Post 91 has a large infantry, a large Special Operations population. These guys know we used to serve in the same units,” said Kurinec, who served 25 years in the U.S. Army, with deployments to Germany during the Cold War then service in the 101st Airborne Division during Desert Shield/Desert Storm. For the last 18 years of his career, he worked for a Special Mission Unit at Fort Bragg, N.C., as part of the U.S. Army Special Operations Command. Kurinec was awarded the Silver Star and three Purple Hearts. “We talked about how things were, how things are, what are they up to now. It’s great for Legionnaires to hear they are doing some really exciting things, that all the hard work they put in for 20 years didn’t go to waste. These young guys have picked it up and taken the ball that much further down the road.”

Then, “We try to impart on them two questions: Why are you serving? and Why are you fighting? Those are two separate challenges that each individual soldier, sailor, airmen and Marine have to come to grip with. Because in the military your profession involves danger. When you go overseas it’s dangerous, so why are you going to risk yourself?”

The 10 active-duty servicemembers from Joint Base Lewis-McChord were chosen by their chain of command to attend Post 91’s reconnect ski trip. Post members contacted U.S. Army division and regiment senior leadership who either worked with or for them when they were on active duty. “The reconnection starts right there,” Kurinec said. The Legionnaires shared they wanted to provide servicemembers a time to decompress so if leadership at Joint Base Lewis-McChord knew of men and women who needed it, “we want to be that resource that they can lean on so they don’t feel like they have to lift the world up by themselves.”

Kurinec said that for a few of them it was a marriage retreat, for others showing signs of combat stress it was a time to get away and “to get reinvigorated on what the American dream is.”

Upon their arrival to Montana, the servicemembers were “absolutely blown away by the hospitality and the gracious folks here in Bitterroot Valley,” Kurinec said. “We had so much local support. If it’s sometime tangible like a ski trip and it’s active-duty folks coming in, people really do want to help out a lot.”

Local support included donated lodging, airfare, and transportation to and from the airport, and discounted meals. “It was nice to see that part of America (during a time of a pandemic) take time out of their day to support it and give back. And I just can’t thank enough the other Post 91 members (and their wives) that helped out, donated a lot of long hours, and definitely want to thank The American Legion for providing the umbrella in which to do this.”

The wives of Post 91 members, some of them veterans as well, spent time with the spouses of the active-duty servicemembers discussing careers, family and life as a military spouse.

Post 91’s reconnect event for active-duty was to provide a time to bond and decompress, but also to share the mission of The American Legion and the value of membership. Because many of the active-duty servicemembers were in the 20s, Kurinec said it may not make sense to them now about the need to join The American Legion. “But when you’re done with your military career The American Legion is a critical component for good overall physical and mental health. In my words, there is nothing more destructive you can tell a soldier, sailor, airman or Marine when they get out of the military is that the goal is to be an individual and be successful by yourself. No one is successful by themselves. The American Legion provides an incredible team that you lean on. So we impart on them the importance of joining The American Legion, becoming part of the solution.”

Kurinec said he leans on The American Legion “for the simple questions of life and the difficult questions of life. It’s a great organization. There is a group of people that you can lean on, not feel like you have to carry the world on your shoulders.

“If you’re part of something, your chances of going into a fitted depression and possibly suicidal is a lot less. We think being a part of a team, both in active duty and part of The American Legion afterward, is a key to the solution of veteran suicides.”

As Kurinec dropped the servicemembers off at the airport, his departing words were “We are always here for you.

“I know what these guys go through on a daily basis. I know what they go through in combat and to see them light up and actually be able to take their foot off the gas and relax, basically discuss things other than the job at hand, it gave me lot of fulfillment. It was emotionally good for me. “The American Legion program as a whole helps fight stagnation, it helps fight depression, and again it helps fight suicidal tendencies. It was just so invigorating to be working with the guys again doing something tangible that you know is going to have a long-term effect. I got as much out of it as they did.”