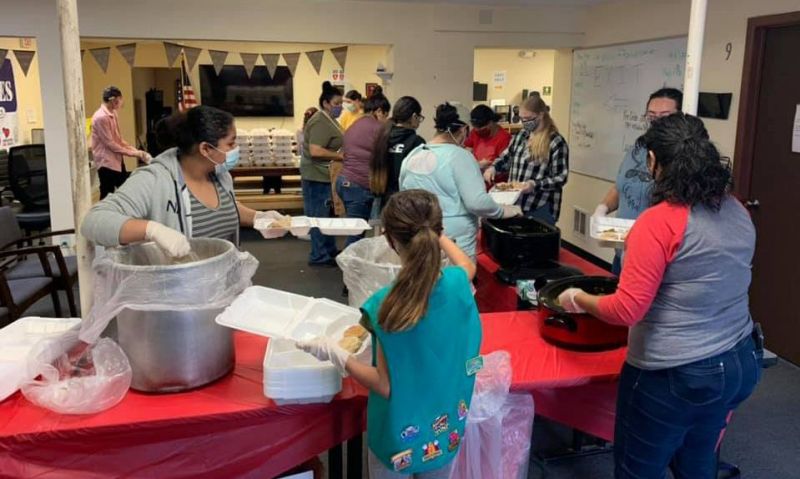 A historic snowstorm hit Texas in February, leaving thousands without power and basic essentials for days. An effort led by American Legion Post 213 member and assisted by fellow members of her post helped thousands deal with the difficult time, while also creating a sense of community in the most unlikely of settings.

Mission Buda Cares – a collaborative effort comprised of various nonprofits and businesses, the Buda Area Chamber of Commerce and the City of Buda – provided more than 31,000 meals for residents during a six-day period, at a time when food, water, power and other necessities were difficult to come by.

“Houses had busted pipes. There was no water. There was no power,” said Bruce White, assistant treasurer of American Legion Riders Chapter 213. “People’s food had spoiled in their refrigerators. And all the grocery stores were picked bare. There were people literally who had no food and no ability to purchase any food.”

The situation resulted in action from the CenTex Veterans Alliance, which is located in Buda and is comprised of members of American Legion Post 213, Veterans of Foreign Wars Post 12161, AMVETS Post 115 and the F7 Group, a nonprofit “dedicated to bridging the gap between the veteran/military community and private sector.” Post 213 Commander Cassaundra Melgar-C'De Baca, the CEO and founder of the F7 Group and Chief Operations Officer for the Alliance, worked with her nonprofit, members of the alliance and representatives from Tito’s Vodka to feed over the course of two days what Melgar-C'De Baca said was more than 5,000 essential workers, including pharmacists and grocery story workers, critical infrastructure workers, and veterans and other residents in the area without food.

“To which I said ‘Of course we can,’ and then hung up the phone and thought ‘how in the heck are we going to do this?” Melgar-C'De Baca said. “You say yes, and then you hang up and figure out how you’re going to do it. That’s what we did.”

Tito’s rejoined the effort, while nonprofits Texas Firewalkers and Operation BBQ Relief came on board. Over the next four days, for around 17 hours a day, representatives from all of the respective groups – along with other members of the community – spent time cooking and distributing food. First responders sent representatives to pick up food, while volunteers delivered food to outlying areas. Hospitals and nursing homes received food, while Post 213 served as a smaller distribution point. And those residents who couldn’t come to pick up food were able to have it delivered.

“Just anybody really that was struggling from not just the storm,” Melgar-C'De Baca said. “COVID already had us on our knees. The storm just kind of pushed us over.”

But the effort picked the community back up. Thousands upon thousands of residents received hot lunches and dinners. And it also brought area residents together following what had been a tough 12 months.

Melgar-C'De Baca said that during the course of the effort a Girl Scout who was assisting asked if food could be brought to her grandmother’s retirement complex. The group who took food and water there found out that the residents were unaware that they were under a boil order for their water, and that the elevator had not come back on, stranding residents living on the second, third and fourth floors. County services were contacted to assist the residents over the next few days.

“Now we have Scout troops who are adopting that complex,” Melgar-C'De Baca said. “That, to me, has a bigger effect.”

And while Mission Buda Cares benefited its recipients, Melgar-C'De Baca said it also had an impact on the veterans who assisted with the effort.

“I like to do more things that have the veterans serve the community, rather than asking for something from the community: Serving the community and saying ‘how can we still be of value,’” she said. “In my opinion, and I’m not a professional, that’s a greater deterrent to PTSD, rather than just handing a veteran something and saying ‘good luck, have a nice life.’ When you kind of remind them that they have value and let them hand a meal to an elderly veteran … or whoever it is, that reminds them that ‘this is cool.’

“And then reminding veterans we’re not there to ask for our military discount. That’s not our purpose when we take the uniform off. It’s reminding people they have a purpose. That’s the bigger picture of what we’ve been able to do in Central Texas.”