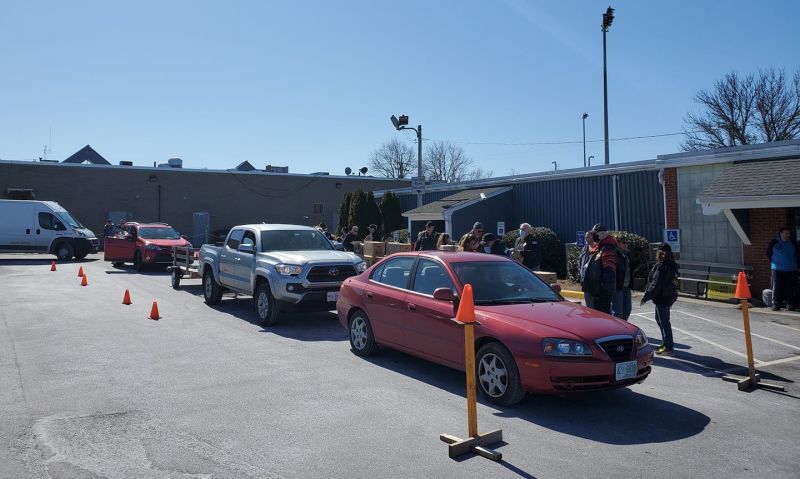 When Henry J. Sweeney Post 2 in Manchester, N.H., had the chance to help another nonprofit distribute 300 or so 32-pound boxes of fresh food in March, the post jumped at the opportunity. When members of the post saw the demand for that food, they decided to expand their efforts.

And now, Post 2 is going to make the food-distribution effort go on as long as that demand continues. One week after the initial distribution, Post 2 handed out nearly 900 boxes containing dairy products, fresh fruits and vegetables, meat and other essential items; another large distribution happened March 27. Similar efforts are planned for the future, going on as long as needed and the food is available.

“Manchester’s not a small city,” said David Powe, Post 2’s junior vice commander and an American Legion Rider. “There’s a huge need here. And this is kind of helping to fill that gap.”

Powe said the first distribution took place through a collaboration between the post and the nonprofit Clear Path for Veterans. The latter had remaining food boxes to distribute and was looking for someone to help them do so.

“We have a member who actually works for Clear Path for Veterans,” Powe said. “If they don’t offload all their (food) boxes, they lose that amount of boxes on the next shipment. So he called us and said, ‘Is there anything you can do?’”

Post 2 got the use of a few trailers and brought the boxes back to their facility to distribute. “I think they were gone in two or three hours,” Powe said. “It went fast. And that was with a day’s notice, with us pushing out on Facebook. And I kind of got the idea that I bet we can do this every week.”

Powe went to work with Don Cox, the president and CEO of the Massachusetts Military Support Foundation (MMSF), which has distributed well over 1 million pounds of fresh food in Massachusetts since last fall. Cox arranged for Post 2 to get a trailer with a larger order of boxes.

The boxes of food showed up at Post 2, where around 880 were distributed on March 20. “It’s going to be a weekly thing now, because (MMSF) said as often as we need trailers they’ll send trailers,” Powe said. “So that’s what we’re doing.”

Necessary COVID-19 protocols are in place during the distributions, which are done via drive-thru only. All boxes are loaded by volunteers into the backs of vehicles.

The food is distributed to veterans first, as well as other American Legion Family members. But Powe said those in the community in need also are welcome to it. Outreach has been done to schools, food pantries, churches and other agencies to expand the program.

Powe said the program has been fully embraced by the post’s entire American Legion Family. “The Auxiliary and Sons really stepped up to help out. The Riders stepped up to help out,” he said. “Everyone is super psyched about this program. We’ve had people that have been members for years (that haven’t been active) that are coming out of the woodwork. We had somebody come (from two hours away) to volunteer for the full day and then picked up a whole truckload of food to bring back to their neighbors. We’re getting a lot of that.”