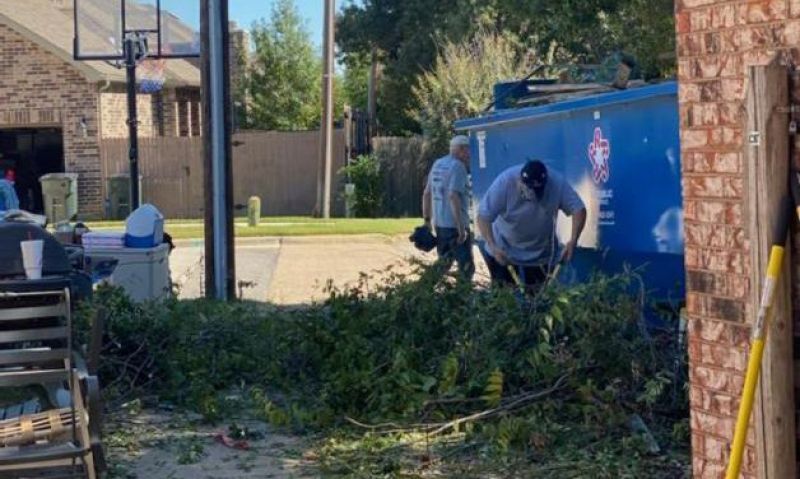 The Neighborhood Initiative Program of North Richland Hills, Texas, has been providing home maintenance, repairs and yard work at no cost to elderly, single parents and persons with disabilities. When Chad Page recently read that the program had expanded to include veterans, he knew it was a perfect opportunity for American Legion Post 655 in nearby Haltom City to get involved.

Page, the service officer for Post 655, reached out to the Neighborhood Initiative Program and asked if the post could volunteer to help a veteran on their list of home improvement needs. “They were happy to have a veterans organization wanting to partner with them to do this,” he said. Page was made aware that the backyard belonging to a single mother with three young children in the home and a son deployed overseas with the U.S. Army was unsafe and needed cleaned up. Post 655 “jumped in to help. I told her that we would take this one on.”

On Oct. 16, several members from Post 655 and the North Richland Hills Fire Department made the backyard safe for the mother and her children. Debris like scraps of metal was removed from the yard, and 300-feet of fencing was taken down and a new fence installed.

“Her older son tried to take care of the yard, but he went away to boot camp and then was deployed,” Page said. “Neighbors complained (to the city).” Those same neighbors came outside to visit with Post 655 members to see what they were doing. “Many of the neighbors were veterans themselves and were happy to help. So it also became an opportunity for us to get new members.”

Page said the mother proudly flies the American and Army flag outside her home, so Post 655 added lights to the pole to illuminate the flags 24/7.

“The end result was that a yard was made safe for the children, an active-duty son has one less home front issue to worry about, and the connection between neighbors and veterans was strengthened,” Page said. “We had a good, positive impact in the neighborhood.”

The mother was “beside herself and overwhelmed” with the cleanup that Post 655 members and the fire department did, Page said. “It can be a lot to take in that this help was available.”

While Post 655 didn’t get a chance to speak with the son, Page said that his mother shared with them that “he can’t wait till he gets leave to come thank us. Her son doesn’t have to worry about this now. I’ve been deployed; you don’t need to worry about things at home. We have taken some of the burden off him.”