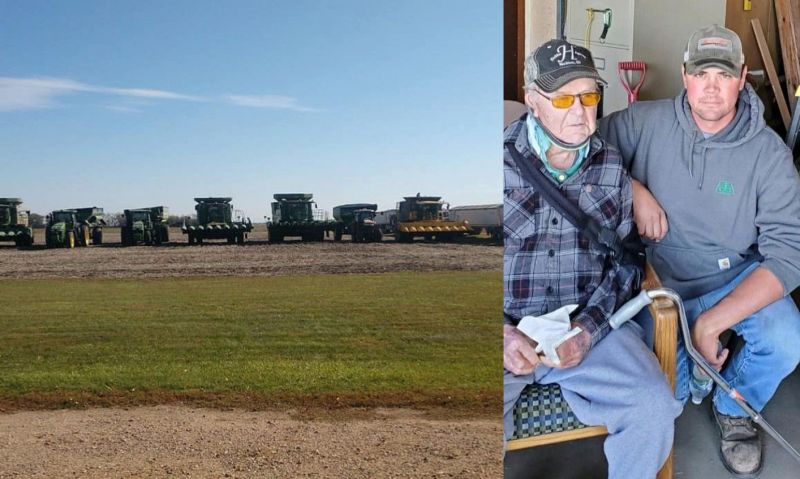 In South Dakota’s southeast corner, U.S. Army veteran Erlin Ellison has been a fixture in and around the small town of Wakonda. The 86-year-old is the third-generation owner of more than 300 acres of farmland, harvesting soybeans and corn annually.

Ellison, a Paid-Up-For-Life member of Gingrich-Dixon American Legion Post 13, had harvested most of his soybeans before he was injured in a traffic accident that resulted in injuries to his vertebrae under his skull. That left around 160 acres of corn still needing to be harvested – and led to his neighbors, some fellow Legionnaires, to step up and help Ellison.

On Oct. 19, more than 20 local residents showed up at Ellison’s fields, complete with their own equipment, and were able to harvest all of his corn. It started when two of Ellison’s neighbors – Legionnaire Dick Nissen of Westlund Post 44 in nearby Alsen and Danny Johnson, the son of Post 13 Legionnaire Eldon Johnson – noticed that the injured man’s corn was in need of being harvested. They began making phone calls to round up help in taking care of the crops.

One of those phone calls went to South Dakota District 8 Vice Commander Brent Frier, the past commander of Post 13 who has known Ellison “most of my life,” he said, noting that Ellison was instrumental in getting Post 13 rebuilt after its original building burned down around 15 years ago. Ellison also loans one of his tractors to the post for its annual tractor pull and built all of the post’s display cabinetry.

“He’s done so many neighbors favors and fellow Legion members favors,” Frier said. “It was about time he was owed one.”

In addition to Frier, Nissen’s father and fellow Post 44 member Richard also helped with the effort, as did Legionnaire Eldon Johnson. Using teamwork and multiple combines, the entire group was able to harvest the corn and take it to an ethanol plant by mid-afternoon.

Ellison, who has been hospitalized, was able to return to his farm to watch the collective harvesting effort. His voice broke with emotion as he described how it felt to watch others come to assist him.

“It made me feel pretty emotional,” said Ellison, whose grandfather bought the farm in 1889. “Neighbors and some people I’ve never hardly seen coming to help. But I’ve always tried to help people, too.”