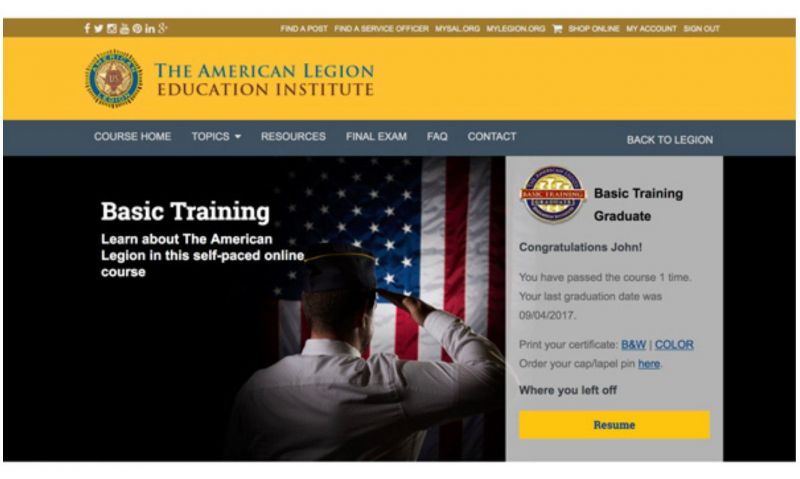 The newest incarnation of The American Legion's official training program for officers, members, Legion College applicants and those who simply want to expand their knowledge of the organization is now available online or via a mobile device.

The former American Legion Extension Institute, the source of the training, is now the American Legion Education Institute, and the course itself is now “Basic Training.” First introduced as a correspondence course in 1948, the material was adapted from that offered at the national Legion College. The 2022 version has been rewritten, updated, streamlined and enhanced with videos, digital photos, clickable links, a historical timeline and additional features, but the structure has continued roughly the same, revolving around what the Legion does, its history and today’s Four Pillars, with a quiz after each section:
History & Organization
Veterans Affairs & Rehabilitation
National Security
Americanism
Children & Youth
Course Conclusion
Final Exam

From the beginning, the course was open to any Legionnaire who wanted to purchase it from Emblem Sales. When the Extension Institute was first introduced in American Legion media at the end of 1946, then-National Commander Paul H. Griffith stated, “I urge all posts of The American Legion to encourage the enrollment of as many Legionnaires young and old as possible in this course of study." In 2012, it transferred from booklets to an online module with a fee. In 2017, it was updated, made free and opened to all American Legion Family members, as it remains today. The cost for non-members is $9.95. The course can be stopped and started as needed, but is designed to be completed in around two hours. Get started at www.legion.org/alei, and see more American Legion training options at www.legion.org/training.