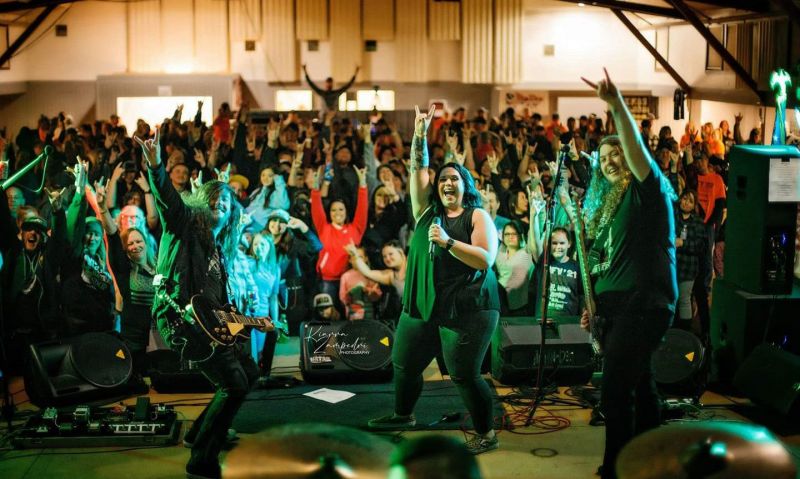 “This event is super important to us because there was always a need in the area for veterans’ relief,” said Post 28 Commander Tom Niemiec, who is on the planning committee for Music for Vets. “There has been a larger need over the past two years that we are seeing (because of the effect COVID has had with job loss). Good thing we are getting bigger with this event because the veteran need has been bigger as well.”

Music for Vets was founded by the rock band ZamTrip out of Rock Springs, Wyo., in effort to showcase local music talent and raise money for veterans. “The men and women who defend our country and put their lives on the line deserve nothing less than everything their community can do for them,” said the band’s drummer Cory Zampedri to the Rocket Miner news.

The concert has been held at Island Pavilion since the fifth show after it outgrew the capacity of Post 28, which hosted shows two through four. American Legion Post 24 in Rock Springs hosted the first event, and also receives funds from the concert to support veterans in need.

A variety of local and national acts are showcased at Music for Vets, which is open to all ages. “It’s a great community event,” Niemiec said. “Our post is a family-oriented post; we run our post as a family. So anything Post 28 does involves the whole family.” This year five bands were featured, including ZamTrip, traveling from as far as Ohio with varying music styles – hard rock, light rock, blues and country. “We try to have many types of music in each event so we can attract people to come and stay.” The other bands were Royal Bliss, The Lonely Ones, Sin City Screamers and FlyOver Town. It’s the dedication of these bands who play for free, or charge a very small fee, that come to Wyoming in the middle of winter to support veterans that amazes Niemiec.

“The quality of the local music and the quality of the bands that we get just blows my mind,” he said. “For them to say yes (to performing at Music for Vets) I think the big thing there is a lot of the folks out there that haven’t served or haven’t been involved in a nonprofit for veterans or to help veteran families, and they want to get involved and they are finding a way to do that.”

And for $10 a ticket, it’s near impossible to see five bands, which was evident with online ticket sales. Over 170 tickets were sold online, a significant increase from years past. “Word is getting out about our event, plus our free advertising is getting better,” said Niemiec, who mentioned that local radio stations help promote the event and conduct band interviews. And for the first time, 12 concert tickets were donated to Vet Tix, an organization that accepts tickets to sporting events, concerts, performing arts, and family activities across the nation and gives them to veterans. “Vet Tix redistributed all 12 to veterans in the area, which was really cool,” Niemiec said. Other tickets went to Music for Vet sponsors and in-kind donors.

“The people that give us the opportunity to do this at a very low cost amazes me,” said Niemiec, who shared that about $20,000 of the funds raised came through sponsors, and the venue at Island Pavilion is provided for three days (set up, the concert, clean up) at no cost. “It’s not ‘here’s five bucks, go away’. No, they show up to the event, it’s ‘we are going to be here to support you.’ The outpouring from the community and the business around here blows my mind.”

It takes about 70 volunteers to make the concert a success. Volunteers are American Legion Family members, friends of the bands, and community members who handle ticket sales, raffle drawings, security, food and drinks, stage and sound support, and more. And at 11 p.m. when the show ended, the band members were invited back to Post 28 to hear the local band Free Resonance perform. “All the bands showed up, they sat back and loved it. It gave them an opportunity to thank everyone in a more personal setting,” Niemiec said.

Niemiec was part of Post 28’s rebuilding several years ago when the post only had 18 members. Now, at over 250 Legion members, 90 Sons of The American Legion members and 130 Auxiliary members, it’s one of the fastest growing American Legion posts in the country. And Music for Vets has helped with that growth.