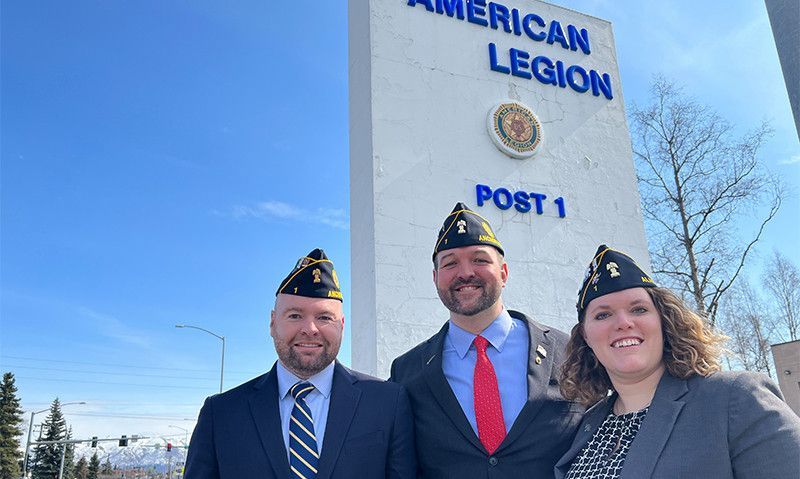 Jack Henry American Legion Post 1 in Anchorage, Alaska, was chartered on Sept. 17, 1919, named for the first man from the city who was killed in action during World War I. Thirty-three young veterans attended that first official meeting, at a Moose Lodge, unsure what the future might hold.

Today, 103 years later, a new future belongs largely to a growing corps of post-9/11 veterans who are dedicated to the organization’s time-honored values and are fulfilling them in new ways. Over the last three years, Post 1 has nearly doubled in size, from about 400 to more than 725, recently putting it into the No. 1 membership slot for the department.

“When you get us involved, what you discover is that the Legion has been around over 100 years,” explains 33-year-old Post 1 Adjutant Laura Sturdevant, an Air Force Academy graduate and former intelligence officer. “That means three generations have been through here. That means we have done that generational shift. And that means the Legion can survive, and it’s not going to die. We just need to figure out how to go for the (Global War on Terrorism) veterans, and then we can ensure that it lives on for another 100 years.”

The post has made a mission focus of attracting, activating and retaining young members for its entire American Legion Family. The all-women Aurora Borealis Post 21 – also a 100% membership award winner for 2022 – shares the same historic post home on Fireweed Lane and is considered a member of that family, as well.

“We brought in officers within the Legion who are engaged professionals, engaged downtown,” 1st Vice Commander D.J. Jones says. “Chamber of Commerce members started coming in. They saw potential. They saw what they liked. First and foremost: how can we get you to be a member? Are you military? Are you a Son? Are you Auxiliary? We ask those questions. We try to get them in the membership. We keep working it.”

Jones, an Air Force veteran of Operations Desert Storm and Iraqi Freedom with 14 combat deployments to the Middle East, has been a member for just over four years. In two of those years, he has earned Gold Brigade jackets for recruiting 50 or more Legion members, and one of those years, he received Silver Brigade honors for signing up more than 25.

“We used to be called the geriatric post,” Jones says. “Our average age has dropped down to the 40s now. That’s just targeting the younger group – things like, believe it or not, beer and yoga. The first time I heard it, I laughed. Beer and yoga? Are you kidding me?” Some of the post’s older members were not so sure about such a combination, pretty sure they heard “beer and yogurt” at first, Jones says.

But once they realized different ideas were changing the demographics of the post, “They really liked the energy.”

Family areas – such as a playground and a covered barbecue fire pit patio in back – have made Post 1 a special event destination for veterans with children over the last three years. “Now, like during the Fourth of July, we see multiple families here, and young children,” Smith says.

Sturdevant appreciates that. Her son Clark, less than 6 months old, is the youngest member of Sons of The American Legion Squadron 1 in Anchorage, and her husband is one of three male members of the Auxiliary unit there.

Post 1 Commander Justin Mills, 34, an Army veteran with deployments to Iraq and Kuwait behind him, says The American Legion provided him the ideal bridge to civilian life after eight years in the military.

“You go through that period where you are trying to figure out who you are, now that you’re no longer a soldier,” he says of the transition. “What I found is that when I came (to the post), it kind of served as that little safe space … to talk to people about how they transitioned. What I have realized is that camaraderie is really important, in that safe space where you can share stories and vent and talk about things. To me, my view, on what this post is supposed to be, has evolved since then. I think we need to grow to adapt to the younger generation – which is what Laura and I are – and start going away from just being a bar. Our bar has been fantastic, and I think it has its place. But even just sitting out by the fire, people talking about their times in Iraq and Afghanistan – that becomes a safe space for people. And we have to be more inclusive to younger families.”

Past Department of Alaska Commander Michael Downs, a former Post 1 commander and adjutant and now its historian, says a key relationship has been with the Anchorage Chamber of Commerce and its Young Professionals Group, which met at the post home and quickly encountered recruitment-minded Legionnaires. “If we get you in the door, you’re going to be a member by the end of the day,” Downs says. “It’s almost guaranteed.”

Downs, who did two stints in the Army and 10 years altogether before and after 9/11, understands the post’s potential – through its history. “At some point, this post was at 1,500 to 2,000 members. It’s right in the middle of Anchorage. We are the oldest post in the city – here for 103 years – but it was in decline.”

It’s not in decline anymore, and part of that has to do with female veterans – like the post adjutant, a former member of the executive committee – moving up the chairs and assuming more leadership roles. About half the post’s officers are women, Downs says.

As department commander, Downs also made a point of regular communication – letters, e-mails, text messages and more – to drive renewals and new membership. The post also operated an effective Buddy Check program and makes a point to convert “holding post” members into local post members, whether it’s Post 1 or not. “We recently sat down and did 400 texts to members all over the state – to join anywhere.”

A U.S. Forest Service district ranger by day, Downs – along with his fellow post-9/11 veterans at the post – are Legionnaires when they are not at their day jobs. They worked tirelessly during the COVID-19 pandemic to assist veterans and families who were isolated, when Downs discovered something funny about the older generation. “When COVID first hit here, our World War II and Korean vets – they were pretty darn tough. It was funny. We would call them and say, ‘Hey, what can we do for you? We’ll go get your groceries for you tonight, if you like.’”

Their reply, he remembers with a chuckle, “To hell with that. What can I do for the post? How can I come in and help?”

“There is that instant bond, and it transcends age,” Jones says. “Now, the friendships start. The support starts. Now, when that older member winds up with a medical issue – cancer, or something like that – it’s the younger members who go, ‘I know Bob. Where has he been? What do you mean he has cancer? What can we do for him? What do we need to do?’”

Jones, as a recruiter, uses a variety of message points to urge membership in The American Legion, including its history of passing laws that have helped veterans, advocacy for those who were exposed to toxic contaminants in the service and providing the largest voice for veterans in Washington.

The main reason younger veterans are joining, he says, “is simple. They see value.”

Gatherings in the mountains on four-wheelers and side-by-sides are both recreational and therapeutic for younger Legionnaires, he says. “When you get a bunch of vets together, they talk to each other. It’s that conversation that takes place between veterans.” And every Wednesday morning at 0700, free coffee is served at the post, and a group of regulars comes in religiously to enjoy each other’s company. If one does not show up, Jones says, “they’re going to check to make sure everything is OK. We are definitely more than just a bar.”

“We are motivated to actually make an impact on the veterans,” Sturdevant says. “When a lot of people think of the Legion, they think of a dark bar… that’s not us. That’s not what the Legion is. (Downs and Mills) did a great job of mentoring me and showing me so much more, so I stay with the post because I know how important it is to get that message out to the veterans and their families. We’re in a generational shift right now, as is America writ large. Things that attract the younger folks are a little different than the Vietnam era.”

She says one of the best things the older veterans provide the new generation is a “wealth of industry knowledge – name the industry. For us young folks that are getting out of the military, that’s a great source that we can pick up on … ‘Hey, how do I do my outside civilian job when all I have ever known is the military?’ A key point is in our transition out … how things operate in the civilian world is different than in the military world. Those of us who joined right out of high school, that’s all we have known.”

The civilian community just doesn’t always understand that, she says. The Legionnaires, regardless of age or war era, does. “It’s a home. I liken it to that spirit of service we had in the military.”