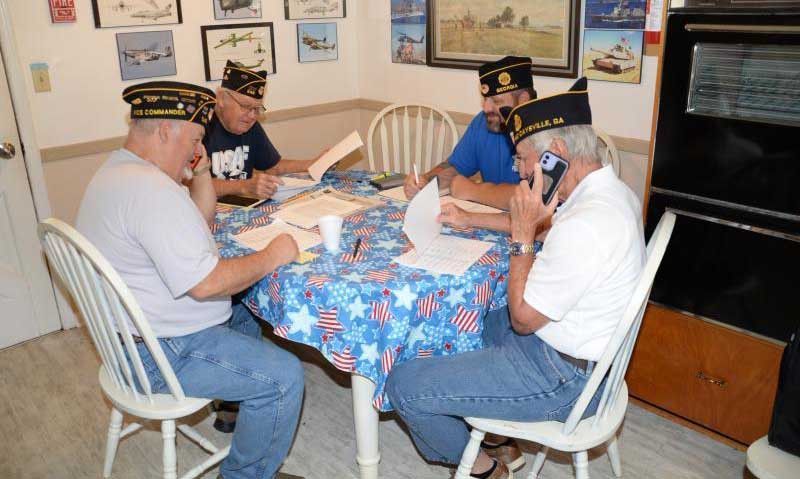 (Photo courtesy of Glenn Harbison, publisher at The News Observer)

In late August, members of American Legion Post 248 in Blue Ridge, Ga., conducted Buddy Checks on its 122-member roster through multiple mailed letters and phone calls. It was a way to verify accuracy of its membership roster and to check in on the well-being of its members.

The post first mailed a letter to those on the roster. The letter, created by Post 248’s new Senior Vice Commander, James C. “Jim” Callender, asked if the veteran was well, if they needed anything, and then it encouraged their participation at the post with programs. The response contact was to the post adjutant to “keep the information flowing in the proper channel,” Callender said.

Several letters were returned, some stating that the veteran was deceased or no longer lived at that address. This helped with verifying the membership roster, bringing the active membership list to about 85 members.

After the initial letter, phone calls were made by Callender, Post Adjutant Chris McKee, Historian Howard "Catfish" Adkins, and post member Ronnie Rabun. The Legionnaires met at the post on Aug. 31, divided up the membership roster, and started making calls with a written script to help guide the conversations. Callender reviewed The American Legion’s Buddy Check Toolkit to help create the script.

“I asked the guys to read over the script before they made the first phone call to give them an idea of how the conversation should be structured,” Callender said. “Who you are, why you’re calling, that you’re calling to check on them and thank them for their service.

“Basically, you just have a conversation. I can tell you that the vast majority of the people that we talked to, the conversation was very positive. They were glad that we called.”

The Legionnaires were able to converse with about 50 members, including two members who are homebound. Those members said they didn’t need help now, but “we told them if you do need assistance from us, that you can reach out to us,” Callender said. “These members were passed on to our post service officer so he is aware as well.” Another 18 voicemails were left, and the team identified members with incorrect or inoperative phone numbers, or no phone number listed on the roster.

A follow-up letter was mailed to those not reached by phone. It asked the member to contact the post adjutant and report that they are OK, as well as their current contact information. Callender said calls are now coming in from that letter.

“You need to use multiple means of communication with your membership,” Callender said. “The post intends to conduct Buddy Checks once each quarter. And hopefully through this we will get more members to actively participate so that we can execute more Legion programs.”