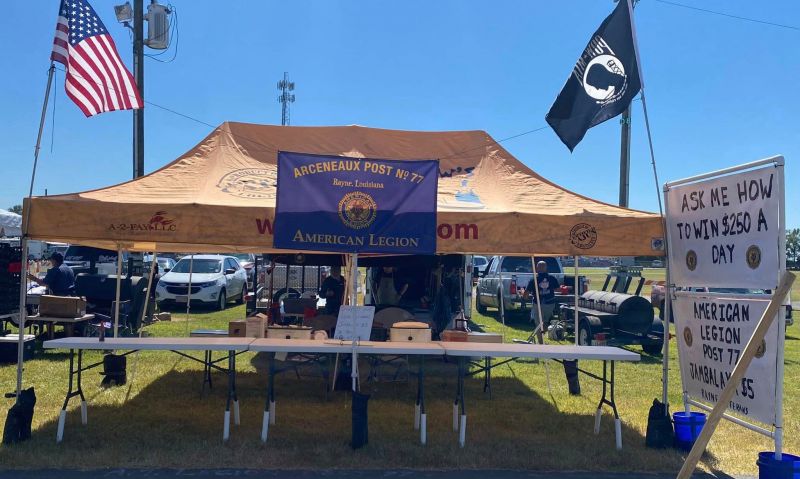 American Legion Post 77 in Rayne, La., had to close its doors for a period of time during the COVID-19 pandemic and following damage incurred by Hurricane Laura in 2020. The closures impacted membership and community outreach, which went noticed by Rayne Mayor Chuck Robichaux. In effort to help the post remain open and active in Rayne, Robichaux reached out to friend and Louisiana National Guard and Army veteran Blaine Dupont for assistance. Dupont, who had experience hosting fundraising efforts to help organizations get back on their feet, joined Post 77 last year after attending a meeting. He then put together a four-phase plan called Operation Save the Legion that resulted in 15 new members and a revenue of $30,000 in seven months.

The following four phases of Operation Save the Legion started in May 2022:

Phase 1: Membership drive. Dupont re-energized Post 77’s Facebook page to grow membership and educate the community of what the post was doing. “In the process of getting new members I had some that said, ‘Blaine, I didn’t remember we had an American Legion in Rayne.’ We were closed during COVID, we were closed during the hurricane. So nobody really posted (on Facebook) and people in town just forgot their American Legion.

“I post daily on our Facebook page. And I’m posting on about 12 different (Facebook) pages in our community when we have events. We post on all those community pages just to keep our faces out there.”

Additionally, Lisa Soileaux with Rayne Acadian-Tribune Newspaper, attends Post 77’s general meetings to report what the post has planned. And next up is a membership drive dinner.

Phase 2: Selling advertising for the bar area. The post sold a $200 yearly sign sponsorship too local companies. A sign company in Rayne “graciously made their sponsorship by telling us ‘We will make every sign for you for free.’ This raised $6,000 right off the bat. That was an easy way to get us some income coming in to keep us alive.”

Phase 3: Raffle ticket drawing. Leading up to the month of December, Post 77 members sold 1,000 raffle tickets for $25 apiece. And each day in December, except for Christmas Day, and on Jan. 1, 2023, a raffle ticket was drawn and $250 was given away. Each ticket had a three-digit number, and the winning ticket was the same three-digit number drawn nightly by the Louisiana Lottery. After the printing of the tickets and money awarded, Post 77 made a $17,000 profit. “We sold every ticket. Our community was so graciously giving and bought tickets right off the bat.”

Phase 4: Bring live music nights back to the dance hall. On the first and third Saturday of the month, Post 77 has live music for families to enjoy. Tickets are $10, and kids 16 and under are free. The first Saturday features a local rock ‘n’ roll band and the third is a Cajun music band. “This past Saturday we had a record crowd of 150 people in our dance hall,” Dupont added< with the performing band being Donny Broussard and the Louisiana Stars. “I reached out to a couple of local businesses (to sponsor band night) and our bands for the third Saturday the rest of the year are almost all paid for. This past Saturday was 100 percent profit for us.”

Other events that have brought in a profit for Post 77 include booth space at a local radio station’s music festival in October, where post members made and sold jambalaya; and a pork cook-off on Veterans Day at the post to celebrate its centennial. And Dupont has also helped with repairs from the hurricane damage, added new lighting throughout the post home and installed glass display cases in the front entryway that showcase Post 77’s history and military memorabilia, among other things.

“A lot of the changes were small just to give it a family-friendly environment,” he said. “We want the kids to see what our heritage is about number one, and want them to see that the veterans, even after serving in the military, still serve our community and give back to the community.”

As Post 77’s now adjutant, historian, public relations officer and entertainment director for booking the bands, Dupont said that people thank him for what he’s done, but he’s quick to add that it’s not just him.

“On my side is my wife (Karen). My wife is with me every step of the way,” he said. “And everything that I do is an idea – I can implement the idea but without the help of the officers and the membership that we have, my idea is just an idea. So I always thank my fellow officers and my fellow members for helping me make the idea that I have succeed.”