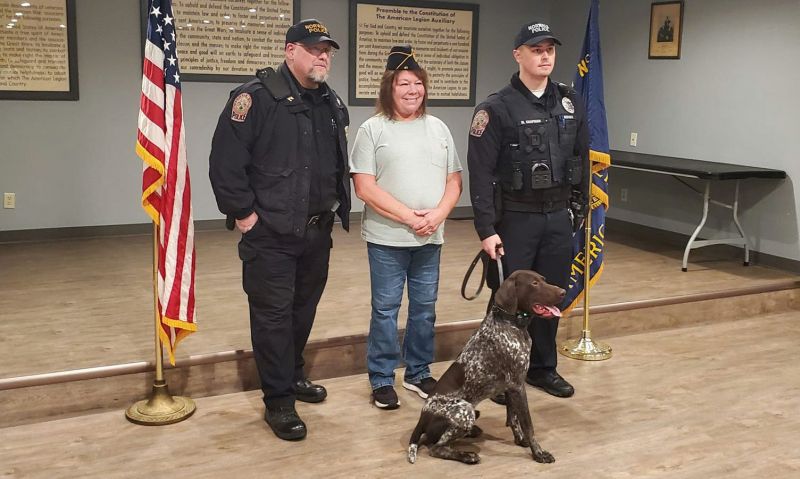 The Norwalk (Ohio) Police Department has a new K-9 thanks to the charitable contributions of the local American Legion Post 41. The dog, named Legion with badge No. 41, is a German Shorthaired Pointer trained in narcotic detection.

The community had a chance to meet Legion on Jan. 21 at Post 41.

“We had a pretty decent crowd at the meet-and-greet because you could love on him,” said Post 41 Commander Kristy Stockmaster. “We were able to pet him and give him treats. It was great.”

Funding for the dog and his training was made possible by Post 41 providing the Norwalk Police Department with a monthly grant. The post gives monthly grants to 11 local nonprofits, that includes the police department, through contributions made from its charitable electronic and paper bingo. Post 41 has funded other Norwalk police dogs through its generous contributions, including a newly retired one named Joker.

“I think the post (members) absolutely love the fact that they can see what we do (with monetary contributions). This gives the members an opportunity to see where the money is being spent,” Stockmaster said. “That’s a wonderful thing. And it’s great for the community.”

Legion’s handler, Norwalk Police Officer Mitchell Chapman, and Police Chief Dave Smith were at the meet-and-greet where they gave a demonstration of how Legion can detect narcotics.

“The Legion is our main supporter of the K-9 program," Smith said to the Norwalk Reflector. “They donate to the K-9 line item. That covers the cost of the dog and the training.”

Smith attended a Legion general meeting to thank the post for its K-9 support and shared that the police department was getting a new K-9. He asked the post members to name the dog, and the members voted on the name Legion. It was Smith who gave Legion Badge No. 41. “That was awesome,” Stockmaster said.