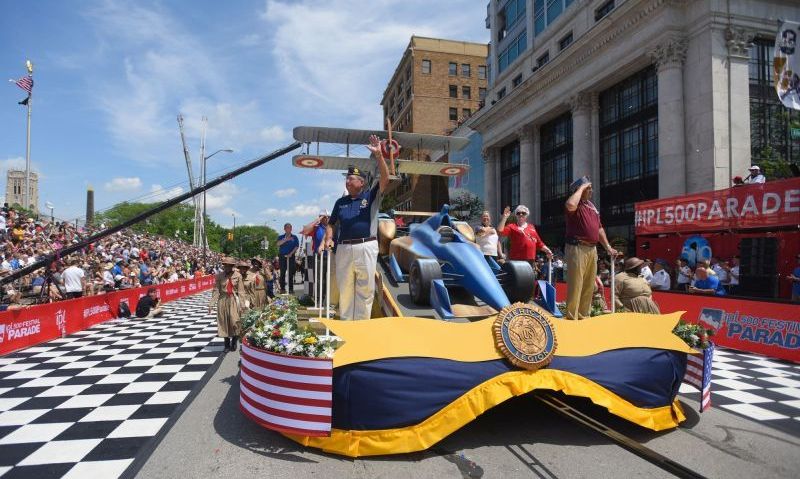 The American Legion Family of Indiana summoned the spirit of one of the organization’s most colorful founding members – World War I flying ace and racecar driver Eddie Rickenbacker, a Medal of Honor recipient – before some 300,000 spectators Saturday at the IPL Indy 500 Festival Parade in Indianapolis.

“This is a very important year for The American Legion, our centennial,” said American Legion Past National Commander James Koutz, who rode on the float, under the replicated wings of a World War I biplane and alongside fabricated vintage race cars – references to Rickenbacker’s life of combat and competitive racing. “He was a great Legionnaire, great pilot and car driver. It’s hard to get much better than that.”

The float received the 500 Festival Parade Grand Marshal’s Award for Most Creative Concept and Execution. It was designed and developed by American Legion National Headquarters, in commemoration of the organization's 100th anniversary.

The American Legion centennial-themed float was also flanked by Salvation Army “doughnut girls” in vintage World War I outfits, paying tribute to the 100th anniversary of the Great War and to raise awareness of the role the Salvation Army played a century ago in Europe, providing doughnuts, coffee and support to doughboys during the miserable fighting there. Today, explained local high school teacher India Scott, who assembled six other volunteers to march in the parade in Salvation Army garb, the organization raises funds, has food drives and collects donated clothing to distribute to the homeless and needy, including many veterans.

“It’s good exposure for us,” Scott said of the parade opportunity. “And it’s important to learn the history.”

“There’s a lot of history right here in Indiana,” noted Strong, the department commander. “I don’t think a lot of people – not even some of our members – realize the number of movers and shakers who have been in The American Legion, especially from World War I.”

Rickenbacker, known as the “ace of aces” in World War I for the 26 shootdowns he notched in France, joined The American Legion soon after his first discharge from service. He was a member of multiple national Legion committees, including aeronautics, which fought for a separate branch of air service in the U.S. military, ultimately leading to the establishment of the U.S. Air Force in 1947. Rickenbacker purchased the Indianapolis Motor Speedway in 1927 and sold it in 1945, having at one point proposed a deal for The American Legion to assume ownership of it. The proposal was debated by the organization’s national executive committee in 1944 but was turned down on the basis that speedway ownership was too far removed from the Legion’s mission.

In 1942, Rickenbacker made history again when he and seven of his eight B-17D crew members survived 24 straight days adrift in the Pacific after they were forced to ditch the plane on a World War II mission.

Sharing the Legion’s history “is absolutely crucial,” said Rees D. Morgan of Broadripple, Ind., immediate past commander of Indiana’s 4th District of The American Legion. “Those who know the history – if we don’t communicate it, the thread will be lost.”

Morgan rode the float not only in his American Legion Post 3 cap but also in uniform as a Boy Scout leader. “I’m in uniform today because we like to demonstrate our support for Scouting, and we also put 1,000 flags on veterans’ graves this morning,” he explained.

Indiana Sons of The American Legion Detachment Commander Doug Heiser of Auburn, Ind., said it’s important for spectators to understand the meaning of Memorial Day, as a time to reflect on sacrifice through service. “Memorial Day has a lot more meaning than a lot of people know,” he said, noting that the lineup of floats reflected that understanding well this year. “Many of these floats out here today represent patriotism – not just the American Legion Family float.”

“I really love it,” said Indiana Auxiliary Department President Slagle of Nappanee, Ind., who rode on the float. “It’s an opportunity to improve membership and to show others how we help veterans, their families, deployed military… and help our communities.”

“This means a lot,” Strong said. “We’ve got a great-looking float, and for once, we are blowing our own horn. And people want to see us here.”

This is the time The American Legion float, designed by Holly Soria of the Media & Communications Division at national headquarters, has been honored with a major 500 Festival Parade award. The Legion received the President’s Award for Most Original Concept in 2018 and the Checkered Flag Award in 2016.