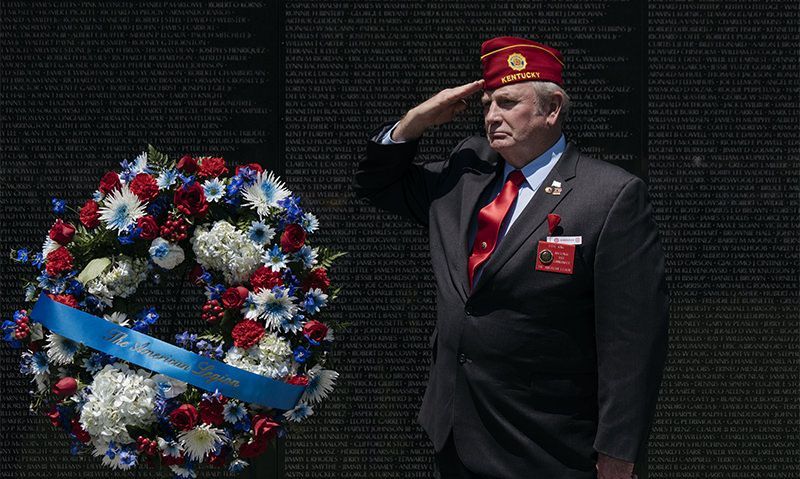 As Americans across the country partake in ceremonies commemorating the men and women who bravely gave their lives in service to the nation, one of the most solemn ceremonies is held annually at the Vietnam Veterans Memorial in Washington, D.C.

Family and friends gathered at the wall on May 31 to celebrate the lives and honor the memories and sacrifices made by those who lost during the Vietnam War. It’s become tradition that during the Memorial Day ceremony, there is the first reading of the names of those who have been added to the Memorial Wall and those whose remains have been repatriated. Ten names were added this year. The Memorial Wall is now inscribed with the names of 58,281 service men and women.

“This month marked 46 years since the last American casualties in the Vietnam War,” said Jim Knotts, president of the Vietnam Veterans Memorial Fund. “For some families, those years did not bring closure.”

Knotts gestured to the empty chair draped in a POW/MIA flag …1,584 remain missing or unaccounted for from the Vietnam War.

“In remembering them, we must all recognize that we shall not rest until there is the fullest possible accounting of those who remain missing,” Knotts added.

Nancy Wilson served in the U.S. Navy Nurse Corps. She joined to support her country by supporting the military who were being drafted.

“Being selected to represent the 11,000 military women who served in Vietnam is a profound honor,” Wilson told the crowd.

Most women serving in Vietnam filled the most critical need — serving their country as nurses. But women filled other roles, including journalists, photographers, administrators and intelligence jobs.

“The impact of the war was felt by everyone, regardless of when they served,” Wilson said. “Names of eight women are etched on the Vietnam Wall.”

Vietnam War veteran and author Karl Marlantes delivered the keynote address to the crowd gathered before the Memorial Wall. Marlantes served as an infantry officer in 1st Battalion, 4th Marines. “We’re all short-timers now. Cosmic short-timers,” he said. “In the next couple of decades, most Vietnam veterans will rotate home for the final time. And the last thing I want to do is go to my grave, wondering ‘what was the meaning?’ I searched for a long time for meaning. And what I came to understand is that you don’t find meaning — you make it.”

Everybody present at the ceremony will make meaning in their own way from the losses from that war, he added. “Everybody on this wall chose to risk their lives,” Marlantes said. “Their lives were sacrificed because of bravery and bad luck…but risking their lives was the important act. What’s worth risking your life for?”

When Marlantes spoke at a high school, a young girl raised her hand and asked Marlantes if knowing what he knows now, would he serve again?

“My answer to her was yes. I would do it again because those ancestors I carry from that war are part of me,” he said. “All of us are us because of this experience. I’m proud to carry these batons and I’m proud to be a Vietnam veteran.”