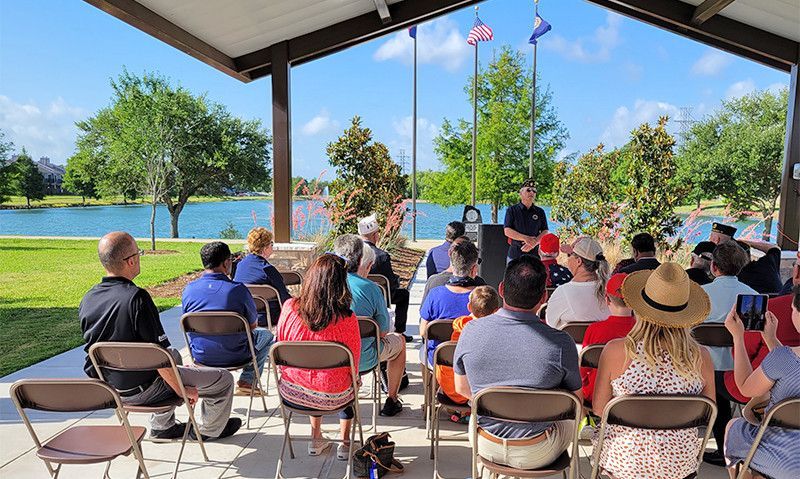 Denny Thibault of Post 294 opens the rededication ceremony with the park's flagpoles and the post's 100th anniversary monument in the background. (Photo by Laura Edwards)

William “Tony” Workman American Legion Post 294 of Missouri City, Texas, took the Legion’s Centennial Celebration to heart. On Memorial Day 2018, the post unveiled a 100th Anniversary monument at American Legion Park, one of 25 in the city. Although the name is long-standing – in fact, no one is sure exactly how long, or precisely how it came to be named after the organization – it was the first time the relationship was made explicit. At the time, the post and city leadership both spoke of improving the 21-acre park’s facilities.

On Memorial Day 2022, the results of those promises were unveiled to a crowd of Legion Family members, city leaders and supporters. The 2018 ceremony “started the ball rolling,” according to Post 294 veterans liaison Denny Thibault, who also served as the post’s Centennial chairman. Through the post’s persistence and outreach, the city “came to the party” and found the money to make the improvements.

Missouri City, long known as a “bedroom community” for Houston, is sandwiched between more traditional towns. As of the 2020 census, its population had surpassed 74,000. Post 294, officially chartered in 2006, is an active part of its community, through everything from Wreaths Across America, to scholarships and Boys State, to its honor guard, which was present at the Monday ceremony to conduct a 21-gun salute and sound taps.

Missouri City Parks and Recreation Director Jason Mangum listed the improvements made since he first joined the city in 2016: from a gravel lot and path around a large lake, there have been added paving, restroom facilities and a pavilion, landscaping, and flagpoles flanking the post’s monument – in fact, Mangum pointed out, the monument served as the focal point the improvements were designed around. There is even a new sign, debuting the park system’s new signage.

The rededication ceremony doubled as a city Memorial Day ceremony. In opening the ceremony, Thibault stated, “This is a very important day for us veterans and family members,” and touted of the park, “What you see today is a first-class operation.” Mayor Robin Elackatt stated to the veterans in attendance, “We may not know your story, but we know your sacrifice.” The local police department’s public information officer, Lt. Russell Terry, is a veteran himself and compared the two organizations: joining the force after the military is “as if I was still in the military … [we] are dependent on each other.”

American Legion Department of Texas Commander Bret Watson made reference to the influence Legionnaires can have in their communities. As another example, after the ceremony attendees adjourned to the new Veterans Memorial at the city building, just dedicated on Veterans Day 2021. Post 294 played an influential role in getting that built as well. So it was fitting that there, Thibault presented Watson with a check for $2,500, the post’s contribution to Watson’s challenge to all Texas posts to raise funds for the American Legion Veterans & Children Foundation.

See a photo gallery of the event here (The long path of honor | The American Legion).