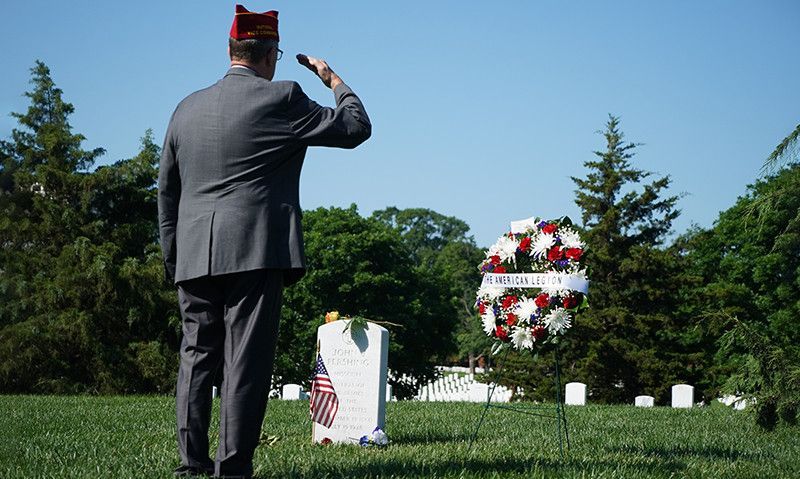 The American Legion paid tribute on Memorial Day by honoring the nation’s fallen heroes at the Tomb of the Unknown Soldier in Arlington National Cemetery, the Vietnam Veterans Memorial and the grave of John J. Pershing. National Vice Commanders Corey E. Bates and Jerry Wilson paid tribute to those who sacrificed their lives for the country and laid a wreath at each memorial.

President Biden, Vice President Kamala Harris and Secretary of Defense Lloyd Austin honored fallen servicemembers during a ceremony at Arlington National Cemetery on Monday.  They laid a wreath at the Tomb of the Unknown Soldier and addressed the crowd gathered at the cemetery’s amphitheater.

“They lie here in glory and honor,” the president said. “In quiet rows in Arlington, in cemeteries in Europe that I visited and many of you have, in graves across our country, in towns large and small — America’s beloved daughters and sons who dared all, risked all, and gave all to preserve and defend an idea unlike any other in human history: the idea of the United States of America.”

Biden invoked the memory of his son, Major Beau Biden, who served in the Delaware Army National Guard’s Judge Advocate General Corps. Monday marked the 7th anniversary of his death from brain cancer believed to be caused from burn pit exposure during his service in Iraq.

“Memorial Day is always a day where pain and pride are mixed together. We all know it, sitting here. Jill and I know it. Today is the day our son died,” he said. “Days like this bring back, before your eyes, their smile and their laugh. And the last conversation you had.

“The hurt can be overwhelming. But for so many of you, as is with Jill and me, the hurt is wrapped around the knowledge that your loved one was part of something bigger — bigger than any of us. They chose a life of purpose.”

During his speech, the president said the country has an obligation to care for those who are willing to lay down their lives for us. He praised the bipartisan Honoring Our Promise to Address Comprehensive Toxics Act (PACT Act) which will deliver health-care benefits to veterans suffering from illnesses believed to be caused by toxic exposures. The American Legion urges members of the American Legion Family to contact their senators by visiting our Legislative Action Center.

“We don’t know how many Americans and servicemembers may have died because of what they were exposed to on the battlefield,” he said. “But we have a duty to do right by them. And I am determined to make sure that our brave service families and members that served alongside them do not wait decades for the care and benefits that they deserve.”

Biden also spoke of Ukraine and the power, the bravery of their citizens and the fight to protect democracy throughout the world.

“A battle between democracy and autocracy, between liberty and repression, between appetites and ambition of a few who forever seek to dominate the lives and liberties of many,” Biden said. “A battle for essential democratic principles — the rule of law, free and fair elections, freedom to speak and write and to assemble, freedom to worship as one chooses, freedom of the press — principles that are essential for a free society.

“Every generation has to defeat democracy’s mortal foes.  And into every generation, heroes are born, willing to shed their blood for that which they and we hold dear. Our memorial to them must not be just a day when we pause and pray, it must be a daily commitment to act, to come together, to be worthy of the price that was paid.”