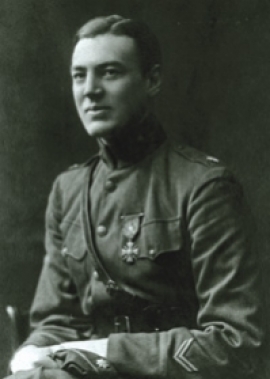 Which Legion founder took the first step toward what would become the Tomb of the Unknowns?

Hamilton Fish. Born in New York state in 1888, his life would mirror a long family tradition of service in both the government and the military. Fish graduated from Harvard in just three years, before the outbreak of World War I.

He was named company commander of the 369th Infantry Regiment – more famously known as the "Harlem Hellfighters." At that time, before full military integration, even groups such as the all-black New York regiment had white leadership. Fish was vocal in his faith in his men. In an October 1917 letter written while en route to Europe, he wrote, " ... after four months’ training sent with the rest to the front, I honestly believe that I have the best company in the [regiment], and that they will follow me anywheres." In the heat of battle in July 1918, he wrote again of his charges, "I am proud to be trusted with such a post of honor and have the greatest confidence in my own men to do their duty to the end." Ultimately, the Hellfighters’ record bore out Fish’s faith. The regiment lost no ground, had no POWs taken and was the first to reach the Rhine, while spending more time on the front lines than any other American regiment.

Back in the United States, Fish attended the Legion’s St. Louis Caucus where he and two other men, as part of the Committee on Constitution, produced the preamble to the Legion’s constitution (read it here (http://www.legion.org/preamble)). He was made a past national commander of the Legion at the 61st National Convention in 1979.

Fish was elected to the U.S. House of Representatives in 1920. His first introduced resolution was to return the body of an unidentified U.S. soldier to Arlington National Cemetery. This honoring of the unknown soldier was the first step toward the construction of the Tomb of the Unknowns, which honors all such soldiers. He served in the House until 1945, and in the early 1930s was a strong opponent of Communist influences in the United States.

Fish worked in the insurance business for decades. Married four times, he died in New York in 1991, at 102. His age hadn’t really slowed him down that much, though – he wrote a book published posthumously, "Memoir of an American Patriot."