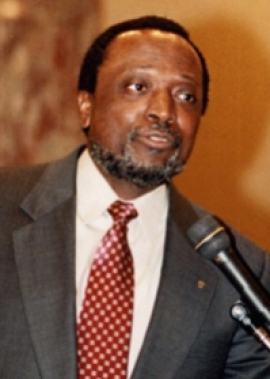 Who won the Legion’s Oratorical Contest and served as president of Boys Nation in the same year?

Alan Keyes. He is the only participant of both programs to ever do so. The prominent black conservative, born in New York in 1950, is the son of a 33-year Army NCO who received two Purple Hearts and a Bronze Star and served two tours of duty in the Vietnam War. His father’s military career had the family crisscrossing the country; he participated in the Legion youth programs in 1967, representing Texas. Since then, there has been one other case of a participant attaining the same feat – but not in a single year.

The talents for oratory and politics Keyes displayed as a teenager have served him well in adulthood. He earned two degrees from Harvard University and has made a name for himself as an author, radio and TV host, U.S. diplomat to both foreign countries and the United Nations, and long-standing political candidate. He has run for president three times as both a Republican and an independent, most recently in 2008; and for the U.S. Senate another three times, most recently in 2004. The Illinois Republican party invited him to settle in Illinois and accept the GOP nomination. He did, but lost the race. His opponent? State senator Barack Obama. Today, he is a conservative activist.

In 1999, the Legion awarded Keyes the National Commander’s Public Relations Award during the Washington Conference.