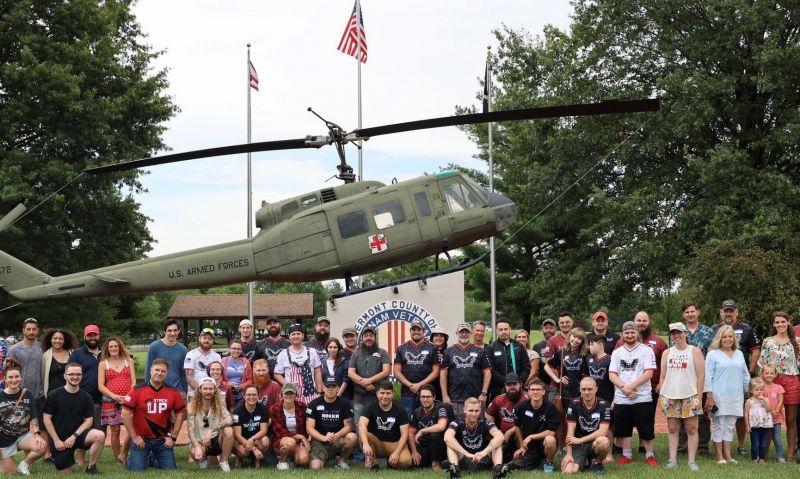 When U.S. Marine Corps veteran Chris Earl started Regiment Gaming in 2020, his goal was to keep his military camaraderie and unite veterans in a gaming community. But as evidenced on Aug. 6 in Cincinnati, Earl’s impact has gone well beyond that.

At Regiment’s American Legion-sponsored BBQ at Veterans Memorial Park, around 50 or so members of Regiment’s gaming community met up in person, some for the first time ever. And there was a common theme among the group: these were not just fellow gamers.

“It’s family. It’s home, for sure,” said 21-year-old Adrianna “Whiskey” Bennett, Regiment’s content director and a resident of Eaton, Ohio. “When I first got out of the Marine Corps (in 2021), I was so lost. Going from having the Marine Corps be my everything to a new town that I’d never been a part of, I didn’t have any friends. Regiment found me, and now it’s like I have a home and a family.”

Bennett’s description of what Regiment has meant to her matched that of Los Angeles resident Andrew “Oakley” Wiley, who served in the U.S. Army from 2008-2012, deploying to Iraq from 2009-2010. Wiley, a professional photographer, said being a part of Regiment’s community has proven therapeutic for him – and likely for others.

“I’m a veteran who didn’t have to shoot anybody or get blown up,” Wiley said. “We dealt with our fair share of crap. But I feel my deployment was super light. And even just the effects that a deployment like that have on someone’s mindset is nutty. For what this does for me … it hits me in my heart and in my head every day that I get to spend with these guys on Discord and at events.

“So, when it comes to someone who has seen a lot more (during deployment), I couldn’t even put a value on what this does for mental health. You can talk to anybody here and they’re knowledgeable about what it takes to survive.”

Getting a chance to meet up in person and strengthen bonds already in place was a good reason for Wiley to make the trip to the Midwest. “I think a lot of people don’t realize that even if it’s through a computer and a camera, when you spend four or five hours of your life every single day with somebody … there’s an attachment,” he said. “Getting to meet these people adds so much more to the connection.”

Stephen “Shanghai Six” Machuga, the founder of Stack Up and a former guest on The American Legion’s Tango Alpha Lima podcast, traveled to Cincinnati for the event and said in-person events are needed in the gaming community.

“Two much of a good thing is bad,” said Machuga, a member of American Legion Ronald Reagan-Palisades Post 283 in California and former Army intelligence officer. “A lot of these guys, a lot of these gals, they’re hardcore gamers. And you can spend eight to 10 hours a day in front of your television not interacting with people. You need to bring that part of it into reality. You’ve got to get out there. You’ve got to interact with other people.”

Bennett said she’d met a few of her fellow Regiment gamers in person before, but for those she had not, “It’s really cool to finally put names to faces. We all just shoot the s—t and all that good stuff. So, it’s cool to be able to do that in person and kind of broaden that connection with them.”

Earl, currently a member of the American Legion Department of New Jersey, said the in-person meet-up was “a surreal experience. I’ve known a good amount of these people online. Played video games with them for months. A couple of them for several years. Just seeing them, it’s like, ‘Wow, that’s what he looks like.’ You build these friendships and these relationships with these people, and you think, ‘Oh, it’s just my gamer friend.’ But it changes when you start doing these in-person meet-ups.”

That also was the case for Regiment Gaming VA Officer Tanner “Blackjack” Yackley, who traveled from Grand Forks, N.D., to attend the event. Yackley served in the U.S. Air Force from 2010-2018, operating drones being used in combat zones in Afghanistan and other areas of combat zones.

“It's such a cool feeling,” Yackley said. “We have a lot of streamers in (Regiment), and you get to see their faces on the stream. But meet them in person and tie those two together, it’s something special. Being able to do that and continue to build those relationships is going to make it even better going forward – ‘hey, I met that guy’. You have a lot stronger connection.”

Being a part of Regiment has been a continuation of his military bond, Yackley said, while also serving as a way to deal with the aftereffects of his service. “When you’re a part of the military, whether you realize it or not, you are part of a community or part of a brotherhood,” he said. “You go through things with people that most people will never even imagine. Being able to have a common ground with people … and having events like this, where you can put a face (with) the game tag, it’s such a fantastic thing.

“There are a lot of people that have been through so much. Regiment’s extremely important to me. I found them, luckily, in a very dark time in my life. And yeah, I may have been physically sitting at a computer, but I’m talking to 15 different people. It’s just amazing to be able to do that and build those relationships with a bunch of fantastic people.”

“It was fantastic, being able to do that and being able to bounce things off (Wolfsteller) based on my experiences and what I’ve been through with the VA system,” Yackley said. “Being able to have a person there like Jeremy that is extremely knowledgeable in that area was fantastic. To be able to have that piece and really utilize the collaboration between the two organizations. That information is out there, but it’s never really effectively communicated to the people who need it.”

It's one of several collaborations that the Legion and Regiment have had, including an in-person tournament last May and setting up gaming stations at the Legion’s upcoming national convention in Milwaukee. It’s a relationship that Earl appreciates.

“The American Legion is obviously a household name among not just veterans, but communities because of how much they do for their communities,” he said. “Just to have them watching our six, helping us out with things like this, it just brings huge validity to what we do. We look forward to hosting more events with them.”

Under Earl’s leadership, Regiment’s community has grown to nearly 16,000 members, the largest military and veteran gaming community in the nation.

“What Chris has done in the past two years has been fascinating,” Machuga said. “Him being able to bring all these people together. It’s breathtaking.”

And knowing what his community has done for others is even more satisfying for Earl. “It’s a great feeling,” he said. “The reason I did this full time – I dropped out of college and quit my job – is the first time someone messaged me and said Regiment saved their life. ‘I was going to kill myself last night, but I didn’t because Regiment was there for me, and the community members were there for me.’

“It’s surreal. I never thought as a 24-year-old kid I’d be able to do something this impactful and save people and change people’s lives.”