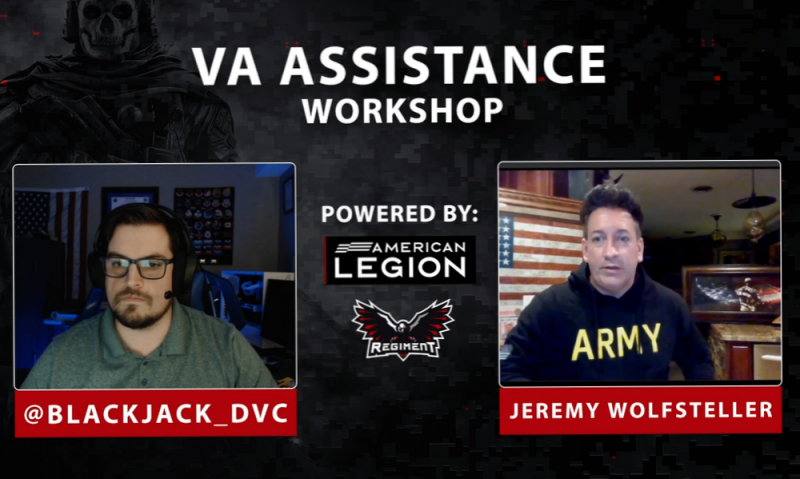 A little over a month after The American Legion took its first step into a new arena, American Legion service officer Jeremy Wolfsteller was introduced to a new audience hungry to learn about the benefits they may be entitled to – or have been previously denied.

On Feb. 4, Wolfsteller, who works for The American Legion Department of Minnesota, joined with Regiment Gaming VA Officer @Blackjack_DVC more than an hour on Twitch for a Department of Veterans Affairs assistance workshop for military veterans and servicemembers. The pair talked about various benefits available to veterans, as well as how to get them or reapply if previously denied.

Regiment Gaming founder/CEO Chris Earl, a U.S. Marine Corps veteran who left the military in 2020, said Regiment’s Discord server has a VA health channel that receives around 100 questions weekly about using VA for care and benefits.

“Any kind of question you can think of. Just so many,” Earl said. “So, I was like, why not make it a live event and bring on somebody that’s probably a little bit more knowledgeable, a little more experienced. I figured (The American Legion) was the organization to talk to.”

The American Legion and Regiment Gaming previously had teamed up on a successful online gaming tournament collaboration. Wolfsteller, a service-disabled U.S. Army combat veteran, said getting in front of a new, younger audience presented a great opportunity for both sharing information and raising awareness about The American Legion.

“I think this is a pretty neat opportunity to reach that younger demographic: currently serving military members who might be under the age of 30 … that are not engaged to understand what (veteran service organizations) are chartered by Congress to do,” Wolfsteller said. “That network is already established through the Regiment Gaming community. For The American Legion to partner with such a nonprofit … and present to them using their platform is just genius. That’s just my opinion. Who else is going to put a network of young veterans to together, allowing The American Legion to come in to present to them nationally?”

Wolfsteller said once he and @Blackjack_DVC started the conversation, the workshop began to roll. “And as soon as the dialog started, the comments just started rolling in, like, ‘hey, I’ve been through that scenario. What do we do if we get a denial? What are the appeal lanes?’” he said. “And I talked about how the Legion supports legislation and why you should be a member to grow our numbers and make our voice stronger. It was pretty cool.”

The workshop can be viewed here. The video of the workshop has been viewed more than 270 times, while dozens watching the live stream either commented or asking questions.

“We had this event planned, and then we brought (the Legion) on last minute,” Earl said. “I’d love to do more of these events, maybe a once-a-month-type workshop that’s an hour or two-hour event. I think with more notice we’d have had a lot more viewers. We had about 48 hours. On events like this I typically advertise for two weeks.”

Earl said events like the workshop with The American Legion can fill a void for those transitioning from the military to the veteran community. “There’s so much information out there, and a lot of these (veterans) aren’t real well informed,” he said. “You’re really not set up for success when you get that veteran status, so I think events like this are very beneficial to current servicemembers and veterans. And this is just the beginning. I think there’s a lot more that we can do.”

Wolfsteller sees the need for similar efforts and the Legion’s ability to assist with that. “We know how extensive and massive the VA is,” he said. “The marketing to get that information out to the population is hard for VA to do. We at The American Legion are kind of that conduit to the community to be able to share that information with them and help them actually access it through accredited service officers.”