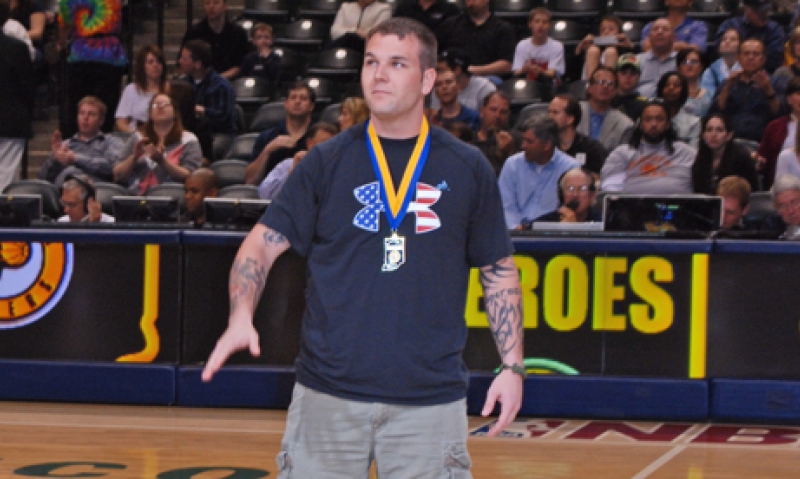 Iraq veteran Michael Black, representing Operation Comfort Warriors, was recognized as an "Indiana Hero," by the Indiana Pacers and their fans on March 30. John Raughter

The final score of the Pacer-Kings NBA game March 30 was Indiana 102, Sacramento 95. But it wasn't a player that received that loudest applause from the hometown Indiana fans. It was Iraq veteran Michael Black.

"I feel extremely blessed," Black said at the game. "I never thought I would be recognized with such an honor. In my short life, I never thought I had done a whole lot but obviously The American Legion and Operation Comfort Warriors believes I have done quite a bit for the country and I really appreciate that. There's no other place I'd rather be right now."

As any basketball spectator knows, NBA "time-outs" are usually the perfect opportunity for fans to visit the restroom or line up for nachos. Scant attention is usually paid to the halftime activities that occur on the court.

Such may have been the case if the fans had not been able to surmise that the young man walking to center-court with a prosthetic leg was special and worthy of their attention. Curiosity quickly turned to admiration and gratitude. Black, with his wife and other family members in the stands, was recognized with a sustained standing ovation for what he was. An Indiana hero.