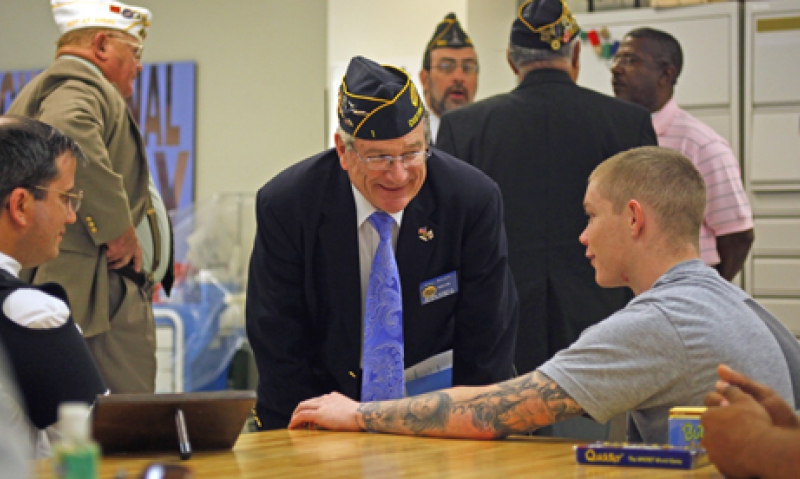 Away from the media glare of Washington's Walter Reed Army Medical Center or the international attention given to the Landstuhl Regional Medical Center in Germany, it is easy to overlook the 360 or so members of the Fort Gordon Warrior Transition Battalion in Georgia. It is, after all, according to several soldiers at the installation, "the Army's best-kept secret."

But the caliber of the men and women stationed there are well known to the Georgia American Legion family.

"Our American Legion posts open their doors to Fort Gordon soldiers by bringing them in for meals, feeding them Christmas dinners, throwing parties and involving them in our programs," said Department of Georgia Commander Henry "Butch" Adams.

Adams was part of The American Legion delegation that visited Fort Gordon and the nearby Norwood VA Medical Center April 21.

The Legionnaires delivered nearly $14,000 worth of comfort items to the troops in conjunction with The American Legion's Operation Comfort Warriors. The OCW program, armed with a $250,000 grant recently awarded by the Pepsi Beverage Company for its first-place finish in February's national Refresh Everything Project, has been delivering gifts and recreational items to wounded U.S servicemembers at military installations around the world.

Portable electronics, restaurant gift cards, DVDs, CDs, socks and backpacks were some of the popular individual items delivered, but it is the volleyball and badminton equipment that was singled out in a thank you letter that the Warrior Transition Battalion sent to The American Legion.

"To many, it may seem that the volleyball and badminton equipment you have purchased is just that - equipment - but let me tell you what you have really supplied to the servicemembers in transition at Fort Gordon," the letter began.

"You have supplied an opportunity for a wounded warrior to belong to a team again," it continued. "You have supplied another way to get through the painful exercises that the soldier needs to do to get range of motion back into an injured shoulder besides just doing his/her rehab exercises. You have supplied a smile that can only come from getting the ball over a net for the first time and making a point for your team. To others, this is just equipment, but the equipment you have purchased is modified and designed for a specific purpose. You see the nets are regular nets, but we will modify them so they are attached to poles and only sit three feet from the ground. The game will be played on the floor so that we can accommodate lower extremity injuries.

"Servicemembers will sit on the floor and will use their arms and their legs to move around the floor to get to the ball. For those with back injuries that can't get on the floor, we will modify it so that they can play from a special sports wheelchair. The balls look like a regular volleyball, but they are light weight, so that the game can be slowed down for soldiers with traumatic brain injuries, poor vision, or limits in motion, so that they have a chance to react and return the ball.

"Yes, to some, it will look like just regular every-day sports equipment, but for us at Fort Gordon, it is smiles, a fun way to exercise, and most of all, an opportunity for the servicemember to go home, or call home and say to the families, whomever they may be - you know what I did today? I did something that matters!

"Thank you from the bottom of our hearts."

Local Wal-Mart manager Philip Myhand made it easy for American Legion family members to load their shopping carts full of Operation Comfort Warrior goods by offering a 10 percent discount. "Wal-Mart is a very big contributor in trying to help our military," Myhand said. "We feel it's the right thing to do for those people who are fighting day in and day out. I wanted to be a part of that."

Since its creation in December 2008, Operation Comfort Warriors has delivered more than $235,000 in comfort items to wounded, injured or ill veterans around the world.

Bolstered by the Refresh Everything grant - won by a national vote on a Pepsi Web site and promoted in social media - The American Legion plans major purchases soon for the Marine Corps' East and West Wounded Warrior Battalions.