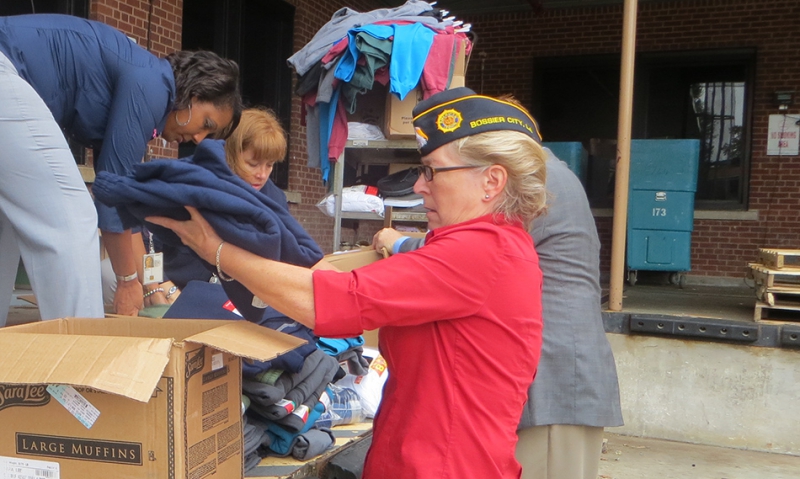 American Legion Bossier City (La.) Post 191 Commander Linda Resendez, who works with homeless veterans as an occupational therapist at the VA, helps unload some of the $5,000 worth of donations from Operation Comfort Warriors. (Photo by Henry Howard)

Less than a week after learning of an urgent need at the Shreveport (La.) VA medical center, The American Legion’s Operation Comfort Warriors (OCW) program delivered nearly $5,000 worth of clothes, toiletries and other necessities.

Legion National Commander Mike Helm directed the donation, which was presented Tuesday at the Overton Brooks facility by Department of Louisiana members. Department Commander Billy Ray Foley led a delegation of Legionnaires who made the presentation.

“To see something like this, that National Commander Mike Helm has donated, to the veterans and to this hospital, is tremendous,” Foley said. “To see these veterans come up and say ‘thank you’ means the world.”

Foley noted that it takes all the Legion affiliations to make something like this a reality. “Everybody helps out on these projects: the Legion, Auxiliary, Sons and Riders. It shows the great commitment and reach our Legion organizations have.”

The OCW donation provided clothing items for men and women - jeans, sleepwear, undergarments, sweatshirts, sweatpants and outerwear such as jackets, gloves and hats. Also included in the donation were essentials such as soap, shampoo, toothbrushes, toothpaste and other toiletries.

Those items allowed the Overton Brooks facility to create a special clothes closet for homeless veterans. Reggie Hardy, who works for the VA, said, “To me, this really warms me because I am a (Army) veteran, and to see the Legion jump on this idea just like that gives me a warm and fuzzy feeling. And I know all the veterans in this room feel the same way.”

The gifts had a special, double meaning for Linda Resendez, who works with homeless veterans as an occupational therapist at the VA. Resendez is also the commander of Post 191 in Bossier City. “This means a lot to our veterans,” she said. “Sometimes our veterans come in and don’t have appropriate clothing to leave the hospital in. They will now have access to appropriate clothing when they leave. It will go toward our homeless veterans so they can rebuild their lives and boost their self-image.”

Toby Mathew, interim director of Overton Brooks, was appreciative of the donation.

“The American Legion has been gracious to give us a great donation to continue to support what we already have,” Mathew said. “We will get these items out to veterans. Not only veterans without homes but also veterans that stay in our inpatient unit who need toiletries.”

For Resendez, the donation was a great example of how the Legion toils on behalf of veterans every day.

“This is very obvious proof that The American Legion is still there,” she said. “People might think it’s grandpa’s organization. But we are here – the young and the old – on behalf of our veterans.”